Jill and Joe Biden arrived in the UK yesterday ahead of this weekend’s G7 meeting. Jill later accompanied Boris Johnson’s wife Carrie and their one-year-old son Wilfred as they strolled along a beach and frolicked in the sea. What can the two women’s body language reveal about their relationship?

Jill, 70, and Carrie, 33, were yesterday photographed laughing together and wearing flip flops on the beach.

The two women look informal in the pictures, despite still wearing their smart evening outfits.

The women’s age difference and their apparent friendliness towards each other suggest a “maternal closeness” between them, according to body language expert Judi James. 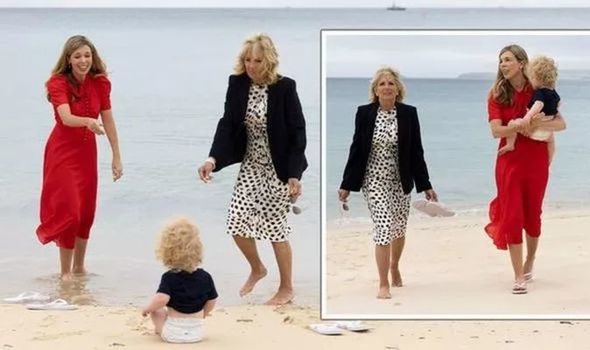 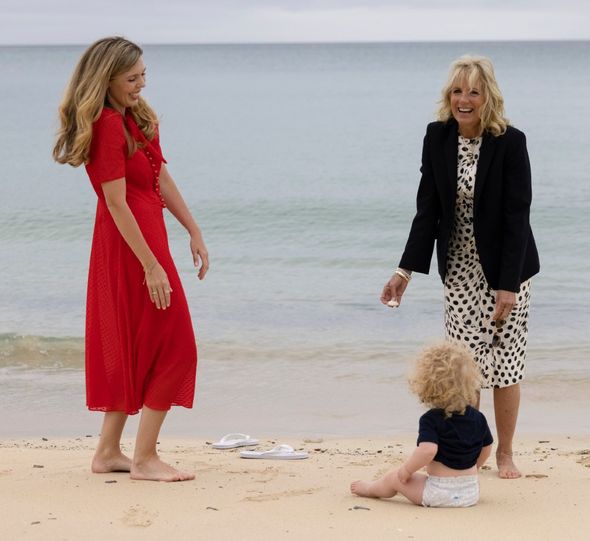 Judi noted: “The rapport signals between these two women look very fast-tracked here, with Carrie clearly set on creating a ‘family holiday’ style of photo-opportunity with Wilfred along to help break the ice in terms of their body language.”

The two women were wearing their second outfits of the day, with Carrie donning a red £325 LK Bennett dress and £49.99 Zara heels.

Meanwhile, Jill wore a white dress with black polka dots, a black blazer with the word ‘Love’ emblazoned on the back, and a pair of black heels.

However, both women wore flip flops for the beach, making them seem relaxed and casual.

“Did Jill expect the paddling poses? Her smart dress and jacket suggest not, but the two pairs of flip-flops provided make it look as though opting out probably wasn’t an option,” Judi said.

The body language expert added: “The fact that this choice of photo-opportunity might not have even been on the menu had the visiting FLOTUS been Melania Trump suggests Carrie might feel she has something of a soul-mate in Jill though.

“The success of these poses depended on Jill relaxing, joining in the laughter and showing mirrored traits to Carrie, and the gamble paid off as the pair projecting a sense of almost maternal closeness despite having only really met up a few moments before.”

Judi went on to give her professional analysis on the women’s facial expressions, referring to Jill’s smile. 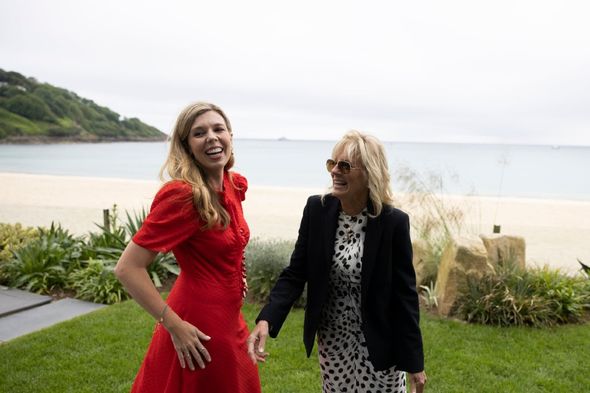 She said: “Jill’s slightly rigid smiles suggest she could have been taken out of her comfort zone with this seaside beach shot.

“But the fact that she’s playing along does show a strong desire to create friendship and bonding with Carrie.

“This is Carrie’s first real photo-opportunity as the PM’s wife on the world stage and if Jill had chosen to keep her feet dry and her killer heels on while Carrie was trying to tempt her for a paddle the moment could have backfired spectacularly for Boris’ new wife.”

Judi added: “Humour is a great bonding technique though and Carrie and Jill do seem to be smiling and laughing together a lot in these poses.” 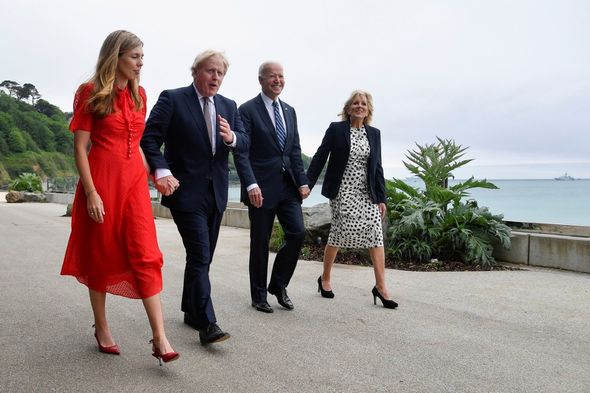 Before strolling along the beach, Carrie and Jill, along with their husbands, met on a scenic deck looking out over the sea.

The two women also posed in front of a large “G7” sign, marking the location of this weekend’s summit.

Judi noted that these “confident power poses” are very different to Carrie and Jill’s body language on the beach.

The body language expert said: “There are some more intrinsic links between them when it comes to their work.

“When they pose either side of the G7 logo both women adopt a confident power pose in what looks like a very natural and spontaneous way.

“Both stand with their feet slightly splayed and legs straight and both have their arms hanging down at their sides.

“There’s no attempt to create ‘comfort’ barriers by clasping the hands together in front of the torso or clutching at a bag here and no more submissive posing with the weight on one hip or the feet crossed at the ankle.”

Judi added: “Jill and Carrie might have shown their fun, family side on the beach here but there are also mirrored signals that suggest they might have a matching capacity for confidence and the ability to take the lead at times, too.”