Italy’s biggest volcano just got even bigger! Mount Etna has risen to a record 11,013ft following some 50 episodes of ash and lava belching from the mouth of the crater since mid-February

Mount Etna has grown in height to a record 11,013ft after six months of activity, according to Italy’s volcano monitoring agency.

Experts said the southeast and youngest crater of Europe’s most active volcano is now much higher than its ‘older brother’, the northeast crater, which was the ‘undisputed peak of Etna’ for 40 years.

Some 50 episodes of ash and lava have been belching from the mouth of the crater since mid-February, the National Institute for Geophysics and Volcanology (INGV) said, giving Etna a new peak. 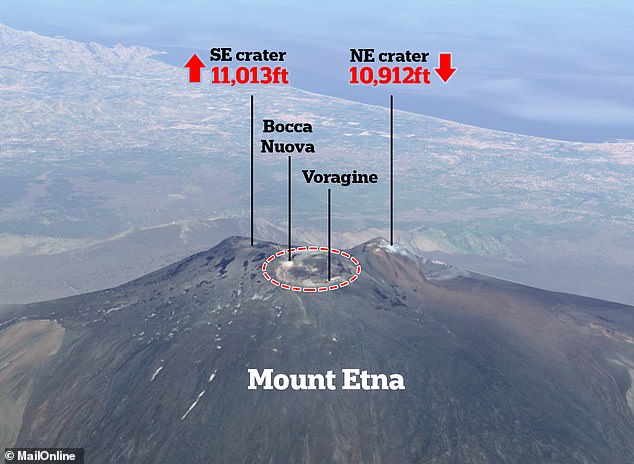 Mount Etna has grown in height to a record 11,013ft after six months of activity, according to Italy’s volcano monitoring agency. Experts said the southeast and youngest crater of Europe’s most active volcano is now much higher than its ‘older brother’, the northeast crater (pictured) 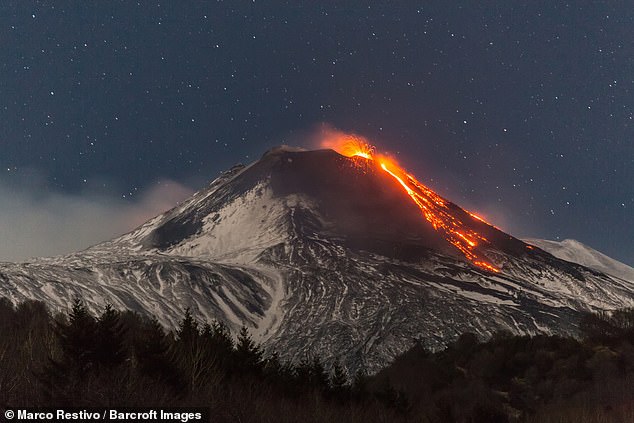 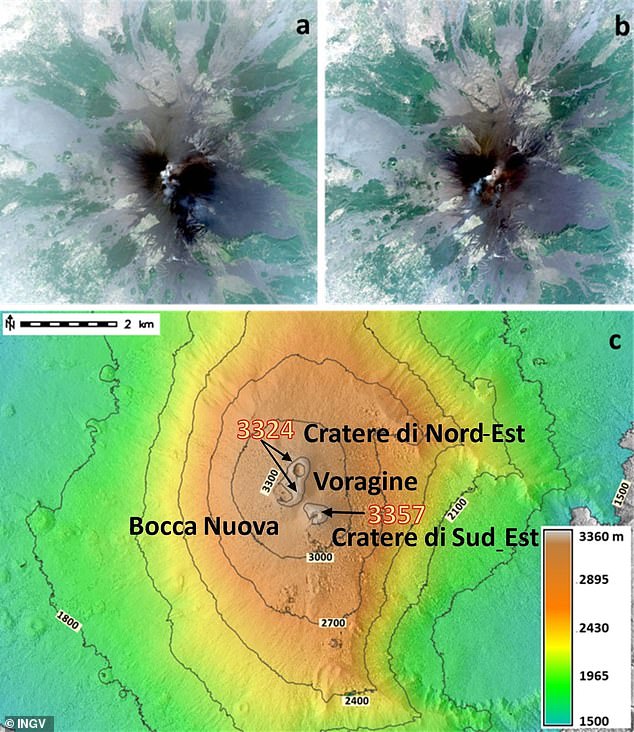 The southeastern crater is shown here on the graphic and in satellite images above along with the other three craters at Etna’s summit: the northeastern, West Chasm or Bocca Nuova (new mouth) and the central Voragine craters

How can researchers predict volcanoes?

According to Eric Dunham, an associate professor of Stanford University’s School of Earth, energy and Environmental Sciences, ‘Volcanoes are complicated and there is currently no universally applicable means of predicting eruption. In all likelihood, there never will be.’

However, there are indicators of increased volcanic activity, which researchers can use to help predict volcanic eruptions.

Researchers can track indicators such as:

Satellite suggest the southeast crater has now surpassed that and stands at 11,013ft.

Etna is Europe’s most active volcano, producing enough lava every year to fill a 108-story skyscraper.

It has been churning out smoke and ash since February, dirtying streets, slowing traffic and damaging crops.

Although it poses little danger to surrounding villages, Sicily’s government estimated in July that 300,000 metric tones of ash had so far been collected as part of the clean-up operation.

The INGV, based in the Sicilian city of Catania, said this increase in volcanic activity had led to a ‘conspicuous transformation of the volcano’s outline’.

‘Thanks to the analysis and processing of satellite images, the southeast crater is now much higher than its “older brother”, the northeast crater, for 40 years the undisputed peak of Etna,’ the INGV wrote in a press release.

‘This record, however, has now been surpassed by the cone of the southeast crater and, today, Etna has a new peak.’

The 700,000-year-old volcano is the second most active on Earth, after Hawaii’s Mount Kilauea.

Situated between the African and Eurasian tectonic plates, it generates nearly constant eruptions of varying degrees.

It’s most severe recent eruption occurred in March of 2017, when nearly a dozen people were injured.

But eruptions have been recorded as far back as 1500 BC, with a devastating eruption in 1169 causing an earthquake that killed an estimated 15,000 people.

Research from 2018 revealed that Mount Etna is slowly sliding into the sea and when it finally goes it could trigger a tsunami.

It was already known to be edging slowly towards the Mediterranean, but the analysis showed the movement is mainly being driven by it collapsing under its own weight — a phenomenon known as ‘gravitational instability’.

This has caused one of the sides of the notorious mountain on the east coast of Sicily to weaken, increasing the risk of a devastating tidal wave.

Previously it had been assumed the lava bubbling inside was the root cause of the volcano’s movement.

Separately, scientists have also argued that the title of the world’s highest mountain should go to a volcanic peak in Ecuador, rather than Everest.

They said in 2016 that when measured from the centre of the planet, Mount Chimborazo extends further out into the atmosphere than Mount Everest.

This is because the Earth is not a perfect sphere and bulges around the equator.

But when measured from the centre of the Earth, researchers at the Institut de Recherche pour le Développement in France confirmed that Chimborazo’s apex reaches 3,967 miles.

Everest, by comparison, does not even make the cut for the Earth’s top 20 highest mountains, measuring 3,965 miles from the planet’s centre.