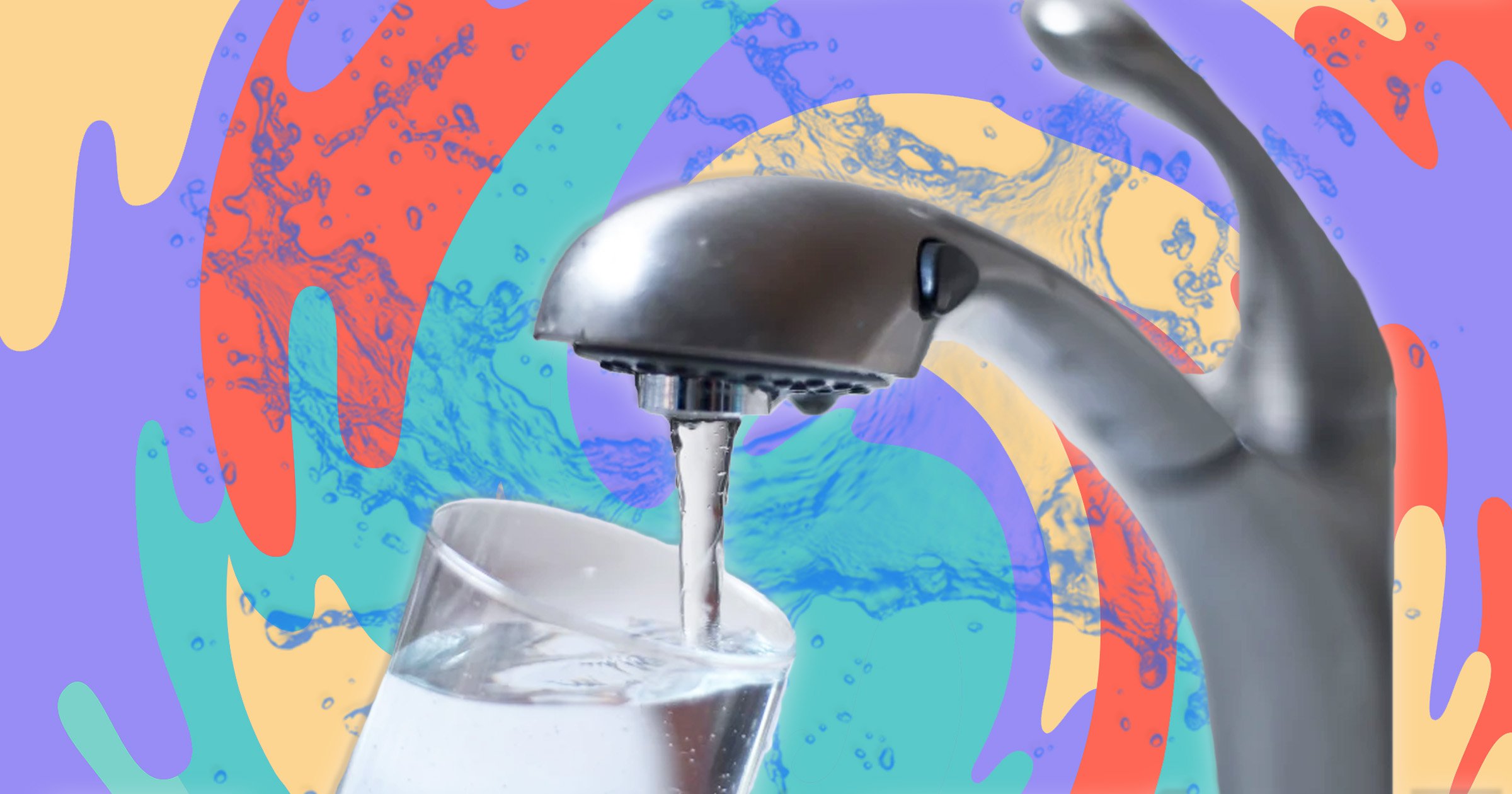 Do you happily ask for tap water in restaurants, or does the idea of anything not run through a filter send a shiver down your spine?

There are plenty of people who couldn’t care less about filtered water, but there’s also a fair amount who swear up and down that tap water from certain parts of the country tastes like it was pumped straight from a swamp.

Stephanie, an ediscovery consultant, uses a Brita filter in her London home as she’s not a fan of tap water in the capital.

But is there actually that big of a difference between tap and filtered water?

Naomi Newman-Beinart, PhD, a nutritionist (BSc), says the question of tap vs filtered water essentially comes down to ‘six of one and half a dozen of the other.’

‘Firstly,’ she explains, ‘it’s important to make it clear that there are no serious health problems directly related to drinking any UK tap, bottled or filtered water.’

‘There is no health need to drink bottled water or filtered, and the carbon footprint of tap water is many times smaller than bottled water.’

‘With that being said,’ she adds, ‘as with many decisions in life, there are advantages and disadvantages to whatever you choose.’

Why does tap water taste different depending on where you are?

When it comes to comparing the taste of tap water to other types, Dr Naomi says people in blind taste tests often can’t tell the difference.

However, depending on your area, you may find that you have ‘hard’ water flowing through your pipes, which means it’s filtered through rocks that contain high levels of minerals.

Dr Naomi says this results in tap water in these parts having slightly more calcium and magnesium, but not only you should also be able to get enough of these minerals from a varied and balanced diet, but water filters leave these minerals in the water anyway.

‘A downside to hard tap water is that the minerals can contribute to dry and itchy skin and scalp, especially if you struggle with skin conditions like eczema,’ she adds.

As for the widely-derided taste of London tap water, she explains that it’s down to the fact that it’s not ‘soft’.

‘The minerals in hard water can make the water taste a little sour,’ she says. ‘You’ll often hear people complaining about the taste of tap water in London, but it is generally because of the mineral and chlorine content.

‘Some homes choose to get a water softener, which uses an ion exchange process to remove most of the minerals from tap water and replace them with sodium particles.

‘So, if you notice a slightly salty taste in your tap water, it’s likely you have a water softener or live in a soft water area.

‘Most people don’t notice the slightly salty taste but do comment that soft water tastes smoother than hard water.

‘Other people choose to use a water filter jug, like a Brita filter, which contains activated charcoal to remove some chlorine and other taste and odour contaminants. But a water filter won’t remove the minerals from tap water or reduce the hardness.’

She adds: ‘Many water filters advertise that they remove a whole load of unnecessary things from your tap water, but essentially, they mainly remove chlorine and improve taste.’

Is there a type of water that’s better for you?

Dr Naomi says most people she’s encountered who choose to forgo tap water do so for health reasons rather than taste, such as trying to avoid chlorine.

While high amounts of chlorine can be harmful, Dr Naomi points out that The World Health Organisation’s guidance states there should be a maximum of five mg of chlorine per litre of water, and most English water companies aim to keep the level below one mg per litre.

‘A good comparison here is to think about swimming pools, which have up to three mg of chlorine per litre,’ she adds.

Ann says: ‘Small amounts of chlorine are added to tap water to protect it as it travels from the treatment works to the consumer’s tap.

‘If people do not like the taste of chlorine, the taste will disappear if water is stored in a jug in the fridge.

‘Consumers should have confidence in this excellent resource, however, if they have a concern, they should contact their water company in the first instance.’

So, while there may be small amounts of chlorine in your tap water, it’s nothing to worry about – picking filtered water due to worries over chlorine content is a bit of a moot point.

However, Dr Naomi does mention that, while UK tap water is ‘virtually lead free’, it’s possible that lead could enter your water via lead pipes on the way to your tap.

If you’re worried about even the possibility of lead in your water, filters can remove it.

What about bottled water?

Dr Naomi notes that opting for bottled water can bring up its own issues.

She explains: ‘Some plastic bottled water has been found to contain microplastics, which have been shown to disrupt human and animal metabolism and disrupt hormonal processes.

‘So, that is one health-related reason why people are trying to steer clear of plastic bottles.’

However, when it comes to unfiltered water, Dr Naomi adds that there currently aren’t routine tests for PFAS (per- and polyfluoroalkyl substances) in UK drinking water.

What are PFAS, you ask? This is where it starts to get a little complicated.

PFAS is a term used to refer to a range of more than 4,500 man-made chemicals which are classed as ‘forever chemicals’, meaning they effectively don’t break down in nature or in humans. They can be found in things ranging from pizza boxes to firefighting foam, but in 2015, a group of over 200 scientists signed what is now known as The Madrid Statement, which urges consumers to stay away from products containing these chemicals.

There’s still much to learn about them, but Dr Naomi tells us PFAS have been linked to adverse health effects, such as kidney function, metabolic syndrome and thyroid disruption.

‘The EU drinking water directive has set limits for levels of PFAS in drinking water in Europe,’ she explains, ‘but we are yet to see if the UK follows suit.’

We spoke to Dr Kerry Dinsmore, a chemical pollution expert with environmental charity Fidra, who told us the UK is ‘very far behind’ when it comes to public awareness and legal precedent regarding PFASs.

‘There are over 4000 of these chemicals, and I think there’s two that people are actually looking for and measuring,’ she tells us, referring to PFOA and PFOS, two of the most-studied PFASs. ‘Those are the two that are now restricted or regulated.’

She adds: ‘We regulate one chemical at a time, and what we’re trying to push governments to do more is to take the EU approach and look at them as a whole growth.

‘Rather than going through every one of these 4000 plus chemicals, we’re saying we know enough about this group, we know they’re all persistent chemicals. Let’s regulate the entire group of PFAS and solve this problem.

‘Because otherwise what you get is PFOS and PFOA get restricted, and then quickly industries switch to something else. For example, GenX was a chemical they switched to [as an alternative to PFOA], and 10 years later, GenX has been regulated.’

Ann says that, while there are currently no UK-wide statutory limits for PFOS and PFOA in drinking water, the DWI has set their own limit and issues guidance (which has last been updated this year) accordingly.

‘The Environment Agency is working to further develop its analytical methodology to include additional PFAS substances identified in the new US EPA method,’ she explains, ‘and hopes to bring this on line in spring 2022.

‘In addition, the water companies in England and Wales have been directed by the Drinking Water Inspectorate to implement regular monitoring of all their surface and groundwater sources and this will provide additional information of where and to what level these compounds may be present in raw water sources.’

While organisations like the DWI are issuing their own recommendations, Dr Kerry says there’s currently no UK-wide testing for these chemicals happening that she knows of.

‘That data availability is another big issue,’ she tells us, adding, ‘I think that’s why people in the UK aren’t talking about it as much – because they just don’t have that information.’

There has been some research into finding the best filters for removing PFAS from drinking water at home, but there’s only so much individuals can do while PFAS chemicals are being manufactured.

The Nicholas School of the Environment at Duke University conducted a study in 2020 to determine which types of filters were best at removing PFAS chemicals from water. They tested 76 point-of-use filters and 13 point-of-entry or whole-house filter systems, and learned that ‘their effectiveness varied widely’.

‘All of the under-sink reverse osmosis and two-stage filters achieved near-complete removal of the PFAS chemicals we were testing for, said professor Heather Stapleton.

‘In contrast, the effectiveness of activated-carbon filters used in many pitcher, countertop, refrigerator and faucet-mounted styles was inconsistent and unpredictable.

‘The whole-house systems were also widely variable and in some cases actually increased PFAS levels in the water.’

‘Home filters are really only a stopgap,’ said professor Detlef Knappe, whose lab worked with Stapleton’s to perform the study. ‘The real goal should be control of PFAS contaminants at their source.’

Dr Kerry tells us water is just one avenue through which we could be being exposed to PFAS. Currently, Fidra are doing things like working with supermarkets to encourage them to stop using it in their food packaging.

She explains: ‘We focus a lot on trying to cut the use of [PFASs]. How do you really reduce your exposure?

But what does it all mean?

All this worrying information about PFAS is a stressful rabbit hole we didn’t expect to go down, and you’d be forgiven for feeling at a bit of a loss on the whole filtered vs unfiltered water issue now.

Overall, the key thing to take away is that people fundamentally need to get enough water – regardless of where they prefer it to come from.

That’s far more important than dithering between whether filtered or tap is marginally better for you.

‘Most of us don’t drink enough, and the UK recommendations are to try and drink approx. 1.5l of water and other liquids each day,’ says Dr Naomi.

‘Water is versatile and can be free much of the time – so don’t stress yourself out worrying about drinking the wrong type of water. Stress can cause health problems that you don’t need to add to your water-drinking worries.’

If you can’t let go of your love of bottled water, you’d do well to choose locally sourced and packaged waters to lessen the environmental impact.

‘Try British brands such as Actiph,’ Dr Naomi recommends, ‘which begins its life as fresh Shropshire spring water which is then purified using a technique called reverse osmosis and infused with minerals for a smooth and fresh taste.

‘Frank Water is another great option – this Devonian spring water company use their profits to provide safe drinking water around the world. Another old favourite is Britain’s oldest bottled water, Harrogate Spring Water, with their 100% recyclable bottle (including the label and lid).’

And, if you’re worried about PFAS in your water, under-sink reverse osmosis and two-stage filters look like the best filter options to choose from.