Apple iPhone and Android fans will continue to boast that their devices are best and there are certainly advantages to owning both. The iPhone is considered a more secure device which is also the best choice if you happen to also own a MacBook and Apple Watch. However, Android devices are often much cheaper and with Google’s operating system being more open it gives users a simple way to freely customise their phones.

The iOS v Android battle will keep rumbling on but new research has just revealed why iPhone users have one huge advantage over their rivals.

According to a report from bankmycell.com, Apple is still leading the way when it comes to trade-in prices.

The latest study shows that, on average, Apple’s iPhones lost around 23.45 percent of their value in the first year and 45.46 percent by the end of year two.

Compare that to Android and you can see why owning an Apple device offers such a financial advantage.

The scary news for Android flagship users is certainly the fact the average iPhone’s two-year loss is the same as their one-year depreciation of 45.18 percent. 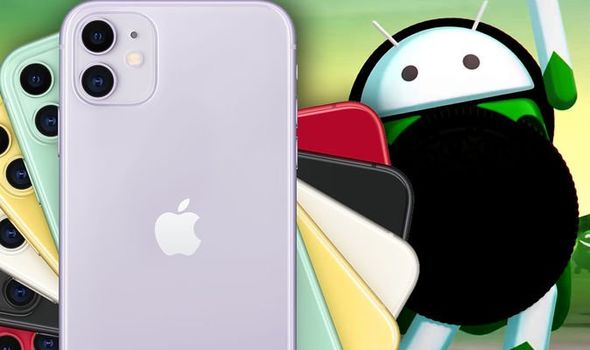 The price drop of iOS devices is very consistent compared to flagship Android phones that fall in value at twice the rate in the first 24 months.

Consumers that opt for budget Android phones may want to shed a tear too; in under two-years, the average device loses a whopping 79.66 percent of its resale value.

If you are an Android owner then it seems Motorola, Google and LG devices are the worst hit by this trade-in price crash with these brands dipping by more than 50 percent between January and December last year.

The Android phones that suffer the least are Nokia and Sony with both of these firms losing under 32 percent of the value during the same period.

Samsung came fifth in the table with its devices losing an average of 34.4 percent between January and December last year.

Explaining more, bankmycell.com, said “Smartphone owners of Google Pixel, LG, or Motorola devices better sit down. With average 2019-2020 smartphone resale depreciation values of 59.41 percent, consumers owning these brands can expect bad news when it comes to cashing in on their old tech. iPhones are the most stable, depreciating, on average, at half the rate of an LG, Motorola, or Google Pixel phone year on year.”

So, if you want the best price possible for your old tech it seems that Apple’s iPhone wins the trade-in battle.