Here is a list of international sports events hit by the outbreak of a coronavirus:

* Crowds will be smaller and receptions have been scrapped at the Tokyo 2020 torch-lighting ceremony in ancient Olympia, Greece, next week. The dress rehearsal the day before will be held without spectators. 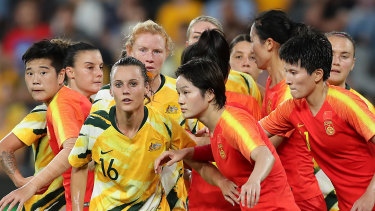 The Chinese women’s soccer team has suffered quarantines and delays as well as being unable to play at home in their bid for Tokyo. Credit:Getty

The International Olympic Committee gave further unequivocal backing to this year's Games in July and August, urging athletes to prepare "full steam" despite the coronavirus threat.

* The World Athletics Indoor Championships, scheduled for Nanjing from March 13-15, were postponed until next year. World Athletics is working with organisers on a date to host the biennial event in 2021.

* A mixed relay Olympic triathlon qualification event to be held in the Chinese city of Chengdu in May was moved to Valencia in Spain, the International Triathlon Union said.

Three Asian Cup events, one in Taiwan and two in China, scheduled for March and April have been postponed.

* The Irish Rugby Football Union has postponed the country's Six Nations fixture against Italy due to the virus outbreak in northern Italy. The game was scheduled to take place in Dublin on March 7.

* England's final Six Nations match against Italy in Rome next week, which had been due to be played without fans present after an Italian government ruling, has been postponed.

* Italy has ordered all major sporting events, including top-flight Serie A soccer games, to be played without fans for one month in a bid to curb Europe's worst outbreak of the virus.

* The Swiss soccer league has been put on hold until at least March 23 after the clubs rejected the possibility of playing matches without any spectators attending.

Guangzhou and the Shanghai clubs will join the competition in April, with their group matches due to be played in May.

AFC Champions League knockout rounds have been moved from May to August to allow the disrupted group-stage matches to be played in May and June.

* China's 2022 World Cup qualifiers against Maldives at home and Guam away in March will be moved to Buriram, Thailand. The games will be played without any spectators attending.

FIFA is also considering postponing the Asian World Cup qualifiers due to be played this month. More than two dozen matches are scheduled to be played around the continent over two match days on March 26 and 31.

* The Chinese Football Association said domestic games at all levels would be postponed.

* The AFC said preliminary-stage matches of the East Zone of the AFC Cup 2020 had been postponed by two months to recommence on April 7 due to travel curbs.

*The Olympic women's qualification playoffs between China and South Korea have been delayed until April.

* South Korea's professional soccer league has postponed the start of its new season. The league also asked its four teams in the AFC Champions League to hold games without any spectators attending.

* Japan's J League postponed seven Levian Cup matches scheduled for Feb. 26 and all domestic games until the first half of March.

* The Indian U-16 national team's friendly games scheduled in March in Tajikistan were cancelled after the Tajikistan government banned citizens of 35 nations, including India, from entering the country.

* The Moroccan football association said all games in the north African country would be played without fans from March 5, after its first case was reported.

* Israeli matches scheduled this week involving top division teams have been postponed until next week.

* The Chinese Grand Prix in Shanghai set for April 19 has been postponed by the governing body FIA and Formula One. The authorities will consider alternative dates later in the year.

* Melbourne's major events chief Martin Pakula is confident the Australian Grand Prix will go ahead as scheduled on March 15, but said he could offer no firm guarantees because of the dynamic nature of the epidemic.

* The all-electric Formula E motor racing series abandoned plans for a race in Sanya, on China's Hainan island, on March 21.

* The opening two rounds of the season, in Qatar (March 8) and Thailand (March 22), will not go ahead as scheduled.

* The Australian Football League said the game between St Kilda Saints and Port Adelaide Power scheduled for May 31 in China had been moved out of the country.

* The International Tennis Federation moved the Fed Cup Asia/Oceania Group I event featuring China, Taiwan, Indonesia, South Korea and Uzbekistan out of the Chinese city of Dongguan to Nur-Sultan (formerly Astana) in Kazakhstan.

But the Feb 4-8 event was later postponed after Kazakhstan declined to serve as substitute hosts.

* China forfeited a Davis Cup tie because its men's team was unable to travel to Romania for the March 6-7 playoff.

* The WTA cancelled the Xi'an Open (April 13-19) and Kunming Open (April 27-May 3) in China. The governing body of women's tennis said it would monitor the situation with several events scheduled to take place in the country later this season.

* Two Davis Cup qualifiers – Italy v South Korea in Cagliari and Japan v Ecuador in Miki – will be played without any spectators in attendance.

* The world championship to be held in Busan, South Korea, from March 22-29 have been pushed back provisionally to June 21-28.

* The 2020 German Open, which was to be held in Muelheim an der Ruhr from March 3-8 and is an Olympic qualifier, has been cancelled, the Badminton World Federation said.

The 2020 Polish Open, another Olympic qualifier scheduled to be held in Krakow from March 26 to 29 has been postponed and will now fall outside the Olympic qualification period, the Polish Badminton Association said.

The Portuguese International Championships scheduled to start on March 5 will not go ahead. The BWF said no decision has been taken on whether the Olympic qualifying event will be played in the future.

* The Vietnam International Challenge has been put back from March to June and will no longer serve as a qualifying event for the Tokyo Olympics. The tournament was due to take place from March 24 to 29.

* The Badminton Asia Championships, originally scheduled in Wuhan from April 21-26, will go ahead on the planned dates after it was shifted to the Philippines.

* The International Skating Union postponed the March 13-15 short track speed skating world championships in Seoul, South Korea, and the event will not be held before October.

* The International Olympic Committee announced Jordan as hosts of the boxing qualifiers for Asia and Oceania after an event in Wuhan was cancelled. They will now take place in Amman from March 3 to 11.

* The women's LPGA golf tour cancelled the March 5-8 Blue Bay tournament to be held on Hainan.

The tour also cancelled the Honda LPGA Thailand event in Pattaya and the HSBC Women's World Championship in Singapore.

* The Women's Amateur Asia-Pacific championship in Pattaya, Thailand, has been rescheduled for Oct. 7-10.

* The PGA Tour Series-China postponed two qualifying events and delayed the start of its 2020 campaign by two months, cutting the number of regular-season events to 10 from 14.

* The European Tour said the Maybank Championship (April 16-19 in Kuala Lumpur) and the Volvo China Open (April 23-26 in Shenzhen) had been postponed.

* The Asian Tour said the Royals' Cup 2020, scheduled for March 12-15 in Thailand, has been postponed indefinitely.

* Pro League matches between China and Australia, scheduled for March 14-15 in Changzhou, will not be played.

* The Japanese Rugby Football Union said the April 25-26 Asia Sevens Invitational, which doubles as a test event for rugby sevens at the 2020 Olympics, had been cancelled.

* The Singapore and Hong Kong legs of the World Rugby Sevens Series have been postponed from April to October.

* A beach volleyball tournament, due to be held from April 22 to 26 in Yangzhou, has been postponed until after the Olympics.

* The April 16-25 Asian weightlifting championships has been relocated from Kazakhstan to Uzbekistan.

* The final two stages of the UAE Tour were cancelled after two Italian participants tested positive for coronavirus. Tests on 167 people at the event proved negative for coronavirus after they were feared to have been exposed to the infected cases.

* Four teams, including Britain's Ineos, have pulled out of several cycling races in Italy.

* The opening round of the World Triathlon Series scheduled to be held in Abu Dhabi from March 5-7 has been postponed.

* The World Baseball Softball Confederation postponed its final qualification tournament for the Olympics. The six-team event, originally scheduled for April 1-5 in Taiwan, will now take place from June 17-21.

* The Czech Republic's state security council decided the country would host a World Cup biathlon event in Nove Mesto on March 5-8 without spectators.

* The first season of the NBA's Basketball Africa League, which was scheduled to tip off in Dakar, Senegal, on March 13, has been postponed.

The FIBA 3×3 Olympic qualification tournament that was scheduled to take place in Bengaluru, India from March 18-22 has been postponed.

* The final event of the snowboard slopestyle World Cup, that was scheduled for March 17-22 in Spindleruv Mlyn resort in the Czech Republic, has been cancelled. Around 12,000 spectators were expected to watch 100 riders compete.

* The ICC has postponed the men's Cricket World Cup Challenge League A that was set to begin on March 16 in Malaysia. Canada, Denmark, Malaysia, Qatar, Singapore, and Vanuatu were set to take part.