It’s all about the right bait. On the bush floor a tea strainer is pegged to the ground, filled with a mixture of rolled oats, peanut butter and golden syrup.

The surrounding bush, on the hills behind the small town of Buchan, was scorched in last year’s summer inferno but now has a green fuzz of groundcover and sprouting leaves from the spring rains.

On a tree near to the bait sits a small, grey box. It contains an infrared camera, which takes night-time pictures of animals in five-second intervals, and stores them to its memory card. 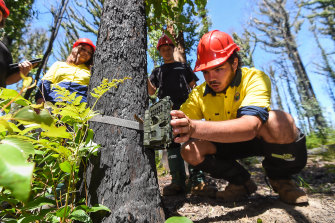 Gunaikurnai survey teams checking camera traps near Buchan. The team is aiming to discover how native fauna have recovered after the 2020 bushfires.Jirrah and Mahlciem Morgan check a camera trap with Paula and Mary Harrison looking on.Credit:Justin McManus

Gunaikurnai traditional owners in East Gippsland have been monitoring their significant totem plants and animals, like the long-footed potoroo, across areas burnt in the huge 2020 bushfires to see what has returned.

Cultural education and engagement officer Cath Thomas says she wants to encourage the young crew to develop a sense of how the bush changes after the fires: “I’m hoping they can learn as much as I did when I was that age and share that with the next generation,” she said.

“I want them to really take in the feeling of being out in the country and working with your mob.”
The crew will monitor for culturally-significant totem animals like djeet gun, (the blue wren), yeerung (the emu wren), bell frogs and Bogong moths. 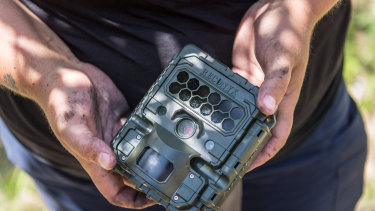 Ms Thomas grew up on the far north coast on NSW, spending lots of time on her Yuin country. Her grandmother on her father’s side is from Lake Tyers.

“Coming out and being in the country, and starting to see growth, makes me feel rejuvenated after being in lockdown,” she said. “It makes me feel like I’m free, breathing the fresh air.”

Gunaikurnai elder Russell Mullet said although his people had been pushed off their traditional lands, they had slowly returned to bushfire and land management. 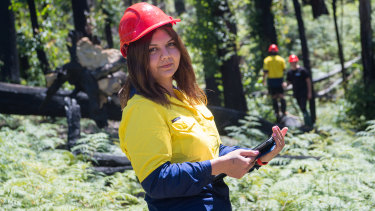 Mary Harrison is part of the monitoring team. Credit:Justin McManus

Aboriginal custodians could advise on the impact of fire suppression activities, including the use of heavy machinery to clear fire breaks, which often damaged cultural sites, he said.

And fires could also provide a window into archaeological history of an area because they cleared undergrowth and surface artefacts became more visible, he said.

“There’s excitement about having young ones out collecting information and elders sharing in what they find,” he said.

In the wake of alpine fires in 2003, Mr Mullet worked on archaeological surveys and recorded more than 300 culturally-significant sites in the high country.

The biodiversity monitoring program is part of the Victorian government's $1.5 million bushfire and biodiversity early relief and recovery program.