On Anthony Albanese’s final night cooped up at home with COVID-19, the Australian Labor Party’s national secretary Paul Erickson and a couple of campaign mates escaped their Oxford Street office for a few drinks in Sydney’s Chinatown.

It was approaching the campaign’s halfway point and, despite a win the previous week at the first leaders’ debate, a lot of media commentary still focused on whether Albanese could make up for a poor first week in which he flubbed key economic figures. 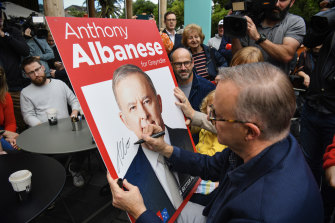 Photographs show the newly minted Australian Labor Prime Minister Anthony Albanese on a meet and greet of his constituents in the Grayndler seat at Marrickville library.Credit:Dean Sewell

Erickson frustrated journalists during the campaign by being stringently tight-lipped about what Labor’s research was showing about its fortunes. But that night, over jugs of Tiger beer at Market City Tavern in Haymarket, he projected a roaring confidence.

“I’m not losing any sleep,” he assured the Herald at the time.

Part of that positivity stemmed from the party’s tracking poll, seat polls and qualitative research which indicated to Erickson that Labor’s vote was holding up in the kind of outer suburban and regional seats the Coalition was targeting.

Erickson refused to brief reporters on which seats the party was eyeing, scarred by the losing experience of 2019, and believing the more predictions you make, the more you become captive to them. Commentating is not campaigning, he told colleagues. 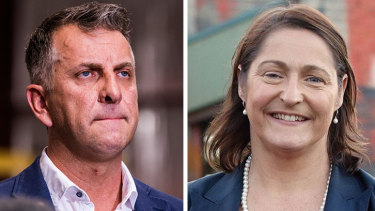 The government was a little more forthcoming, floating possible wins off Labor like Parramatta, McEwen to the north of Melbourne, the Ipswich seat of Blair in Queensland, Gilmore and Dobell in NSW, and Lyons in Tasmania.

But that wasn’t showing up in Labor’s research, and in the end, Gilmore on the NSW south coast is the only one of those seats that may actually fall to the Liberals (Andrew Constance, a former state minister, was in a dead heat with Labor’s Fiona Phillips on Sunday afternoon).

Labor was confident in its small target strategy – another byproduct of the devastating 2019 loss – and Albanese even explicitly said at one press conference: “One of the things we’re doing at this election is under-promising so that we over-deliver.”

Its most valuable campaign asset was the expensive tracking poll of 16 marginal seats, “the track”, which gave the opposition a narrow but stable and consistent lead. The tracking data was highly protected, but one person with limited access said: “It was always around 51-49. It didn’t move. Nothing that was thought to make a difference made a difference.” 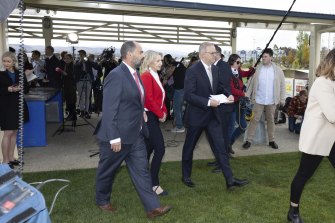 Anthony Albanese departs a Tasmania press conference where he failed to name the unemployment and official cash rates.Credit:Alex Ellinghausen

The worst moment of Labor’s campaign came on day one, when Albanese was unable to state the national unemployment rate and did not now the cash rate. While some people tried to play down the significance of “gotcha questions” from troublesome journalists, the feeling inside campaign headquarters was dire: they were basic figures, and he should have known.

Voters marked Albanese down for that mistake; the questions showed up in Labor’s research. Was the party really a safe pair of hands on the economy if its leader wasn’t up to speed on the stats?

“It was a ‘head in your hands’ moment for many, many people,” said one campaign source. “It was a big knock.” But a week or two later voters’ concerns had dissipated, even disappeared.

Outside the research lab, Labor’s best asset was Scott Morrison. Liberal strategists said the same thing. At one point, as Labor prepared to flip the switch to go negative on the prime minister, ‘No More Morrison’ posters literally went up on the walls inside Labor’s campaign HQ. 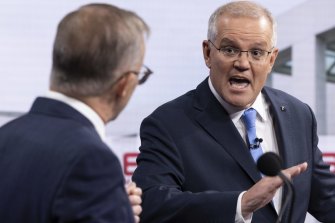 Australian Opposition Leader Anthony Albanese and Australian Prime Minister Scott Morrison during the second leaders’ debate of the 2022 federal election campaign at the Nine studio in Sydney, NSW, on Sunday 8 May 2022. Credit:Alex Ellinghausen

Erickson called upon two loyal advertising gurus, Darren Moss and Dee Madigan, for this election – Madigan’s Campaign Edge crafted the ruthless “That’s Not My Job” ad which played heavily on commercial TV and infuriated the Liberals by using Morrison’s quotes out of context.

But Labor neglected much of the material gifted to them by Morrison’s own colleagues. It did not put Barnaby Joyce’s assessment of Morrison as “a hypocrite and a liar” on high rotation, nor Gladys Berejiklian’s reported description of him as “a horrible, horrible person”.

Why? Campaign strategists tested those messages with voters and found they were compelling, but not as compelling as the more basic message: “Do you really want more Scott Morrison?” Hence the omnipresence of Morrison’s name and face in Labor’s campaign material.

From a run-down office on the Hyde Park end of Oxford Street, Erickson ran an operation that was described as inclusive and disciplined. Drinking alcohol was banned in the office, though staff were free to imbibe at the many nearby bars, while old hands were brought in from around the country and the world.

Julia Gillard’s former chief of staff Ben Hubbard helped war-game the campaign, while another Gillard staffer Ryan Batchelor worked on policy. Kevin Rudd’s former COS David Epstein came on board, while veteran strategist and fixer Eamonn Fitzpatrick set up a “scrutiny unit” to exploit weaknesses in the Coalition.

Former general secretary of Welsh Labour Louise Magee flew in after the budget and helped drive the campaign.

The campaign was not without its issues. Albanese’s relationship with the travelling press pack was sometimes poor; he lashed out at “gotcha questions” and appeared to tire of the intense scrutiny that comes with an election campaign.

As the weeks wore on it became increasingly clear Labor was in trouble in Fowler, where Kristina Keneally had been parachuted in as the result of a foolhardy play by the NSW Right to have its cake and eat it too by keeping both Keneally and Deb O’Neill in the parliament.

The Keneally blunder showed up in the research for both sides; Labor tried to push out negative stories about independent (and former Liberal) Dai Le, while the Coalition began talking about getting Le over the line on preferences (which is what happened).

Broadly, the party also failed to anticipate the size and imminence of the swing to the Greens in Brisbane, although it was always known that a Green breakthrough was possible in those seats.

And of course, though it has clearly won the election, it is still not clear Labor will form a majority government.

The spectre of 2019 hung over the entire six weeks of the campaign and Labor insiders were never willing to declare the race won. But they suspected the government knew the jig was up on the second last Friday, the ominous Friday the 13th of May, after Morrison’s press conference with Chisholm candidate Gladys Liu in Melbourne.

It wasn’t so much that Morrison had described himself as “a bit of a bulldozer” and conceded he would have to change the way he acted and behaved. It was more that Morrison had also started emphasising the future, specifically a “better future”, which was Labor’s campaign slogan.

The shift in language – imperceptible to most people watching – signified to Labor strategists that both sides were fighting on Labor’s preferred turf. Coupled with their likely success in Western Australia, it was enough to maintain confidence right down to the final buzzer – the diametric opposite of what happened in the campaign’s dying days in 2019.

On Friday night campaign staffers left their HQ for the last time and crossed the street to party at the Burdekin Hotel – where the atmosphere was by all accounts electric, powered by the possibility of making history.