Many years ago, at the turn of the final decade of the 20th century, I was a youth travelling across Europe. I had spent the spring and summer in Greece, fortified and challenged by being in a place where, though still an outsider, I had connections based on family and language. I then travelled north into an Eastern Europe beginning its unshackling from communism. It was an absolutely thrilling time. I couldn’t help constantly comparing the blandness of my city, Melbourne, to the dynamism of the crowds I experienced in Athens and Belgrade, in Budapest and Prague. Even though their urban terrains were blighted by the corrosive brutalism of modernism, I loved the layers of history in these cities. How walking down a narrow alley, in the shadow of ugly towering apartment blocks, there were sudden glimpses of the sparkling marble of the Acropolis; the majestic span of a medieval cathedral tower; the glimmering dome of a Byzantine church. 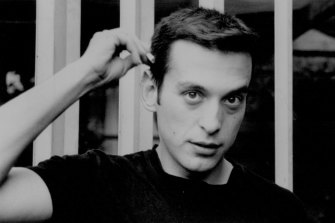 As a young man travelling in Europe, Christos Tsiolkas bemoaned the blandness of his hometown.Credit:Prue Walker

Nostalgia doesn’t excuse ignorance. Looking back, I was woefully uninformed of my nation’s own ancient history: mine was a whitefella’s view of the city. I couldn’t see past the tiny CBD and the endless sprawl of suburbia.

I caught a train from East Berlin to Paris. Though the French capital is one of the most beautiful cities on earth, I had little money and not enough French language skills, so I found it expensive and forbidding. Fortunately, in the scavenging manner of a young traveller, I contacted a friend of a friend of a friend and found some work tutoring English to a final-year lycee student.

He was as passionate a cineaste as I was, and most of our ‘lessons’ involved seeing films together, then playing pool afterwards in small taverns, arguing about cinema. He was besotted by the films of Scorsese and the Coen brothers. I wanted the world to look like the Nouvelle Vague.

One evening we went to a late-night screening of John Hillcoat’s Ghosts … of the Civil Dead (1988). I had seen it a few years earlier, at the film festival in Melbourne. 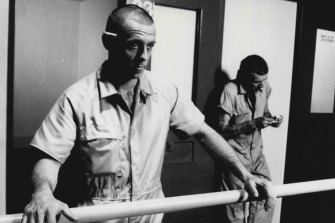 Dave Field and Freddo Dierck in Ghosts … of the Civil Dead.

Hillcoat’s film is a prison drama of exceptional intellectual force, a film that starkly exposes the institutional savagery embedded in the penal system. The cinema that night was only half-full, mostly with young Parisienne goths who were there to see Nick Cave’s performance. The film ends with a long shot of a released convict ascending the escalator at Parliament Station in Melbourne. We have seen how he has been brutalised, dehumanised, reduced to that hideous expletive, c—, that is carved into his forehead. We know the violence that he is capable of, and that he will inevitably unleash on the world he is entering. 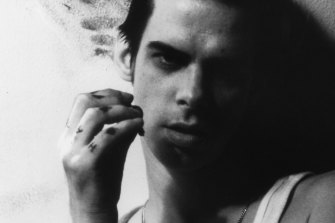 Nick Cave in Ghosts of the Civil Dead.

Yet it wasn’t the existential terror of the ending that affected me. Afterwards, in the cinema foyer, my student sensed my distress. “Christof,” he said (he never managed to forgo adding that Germanic consonant to my name), “what’s wrong?” In between my tears, I spluttered, in Australian English, “I’m bloody homesick.”

Melbourne is a “second city”, overshadowed internationally by Sydney, by the beauty of that city’s harbour and its radiant ocean topography. There isn’t a building in Melbourne to equal the authority of the Opera House or the Harbour Bridge. We Melburnians like to claim that our CBD – our “downtown” – is more vibrant, more cosmopolitan. We also rightly point out that Melbourne has better protected its architectural heritage, that it hasn’t experienced the equivalent demolition and destruction of its central heart as has occurred in Sydney.

As a city, Melbourne is best appreciated in terms of the close-up, when you are right in the middle of its laneways and its narrow streets. However, in long shot, looking down at the city and its clump of jutting office towers, it appears conventional, and has the aspect of a North American city. This, of course, is what makes it attractive to Hollywood. Like Canada’s Toronto, it can stand in for any number of US cities that achieved their consolidation in the age of the automobile. And as with so many North American cities, what is often outside the frame are the suburbs that ultimately define the city and provide its distinctive character.

Many of the films that are still cited as having best utilised Melbourne as a location set their stories in the inner city. Richard Lowenstein’s Dogs in Space (1986) begins at the Melbourne Cricket Ground (MCG) and then settles in a grungy terrace in Richmond. Ken Cameron’s Monkey Grip (1982), based on Helen Garner’s novel, famously opens with its main character, Nora (Noni Hazlehurst), swimming at the Fitzroy Pool (though this scene was shot at the Ryde Aquatic Leisure Centre in Sydney). The story then unfolds within share houses and tiny nightclubs. Helen Garner has a dazzling cameo as a speed freak in another epochal Melbourne film, Bert Deling’s guerilla feature Pure Shit (1975), which is a virtual tour of a pre-gentrified inner-city Melbourne, following the odyssey of a group of addicts wanting to score some A-grade heroin. 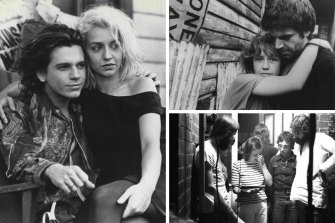 From left, Michael Hutchence and Saskia Post in Dogs in Space; Noni Hazlehurst and Colin Friels in Monkey Grip; Helen Garner on the set of Pure Shit.

The inner west features even more prominently in the canon of Melbourne-based films, and Footscray, Flemington, Spotswood and Williamstown are central locations in the works of Paul Cox, Ana Kokkinos, Alkinos Tsilimidos, Nadia Tass and Geoffrey Wright. Many factors contribute to the centrality of the inner city in Melbourne films, including the proximity to studios, editing suites, and easier transport and accessibility for the crews. Undoubtedly, the fact that, in the main, filmmakers are part of a cosmopolitan, educated class would also have some bearing on the choice of location. Furthermore, there is a strong realist tradition in Australian cinema, and that too dictated the subject matter and look of the films. All the films cited above take place in a pre-gentrified Melbourne, and many of the filmmakers grew into adulthood understanding the inner city as working-class. 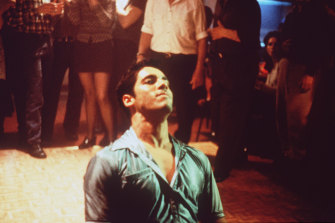 Alex Dimitriades as Ari in Ana Kokkinos’ Head On.

There is another reason why the west has proven such a constant location for Melbourne films. The city’s skyline is best viewed from this aspect. I recall watching a preview screening of Kokkinos’s Head On (1998), which was based on my first novel, Loaded. I realised that the filmmaker had made the story her own, that she had imbued the imagery and mise en scene with her own cultural legacy of growing up in the western suburbs, when there suddenly appeared a striking long shot of the city viewed from atop the Footscray Market. The city looked beautiful. And I realised the story now belonged to Kokkinos – and to the astonishing cast that brought the characters to vivid life – as much as it belonged to me.

During the recent Covid pandemic, I took a walk and ended up at Pentridge. It is no longer a prison; now it is a precinct of high-rise apartments and shops and features a state-of-the-art multiplex cinema. Returning home, I tracked down Alkinos Tsilimidos’s Everynight . . . Everynight (1994), which is set in the prison. The film still speaks powerfully to the damage that the institutionalised violence of the prison system enacts on our body politic. In our very recent memory, when Melbourne is rocked by stories of violent, misogynistic assaults, we can – and I think we must – draw the links to the failures of the correctional system that lead to such outrages. There are ghosts everywhere in Melbourne. Film is one of the mediums through which we can approach and comprehend those spectres. 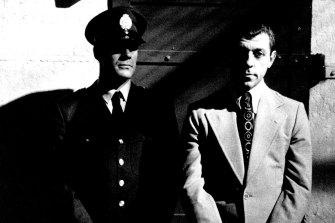 Yet there are parts of Melbourne that remain outside the film camera’s gaze, and they are the suburbs in which most of us live. The suburbs have not been completely excluded from our filmography, however. One of my favourite films is Brian McKenzie’s stunning 1979 documentary, Winter’s Harvest, which observes an immigrant family creating a season’s larder of food from the slaughtering of a pig. Most of the film is shot within the confines of a large shed in suburban Dandenong. Again, by being invited to be guests to the interactions of family and friends, we get a magnificent sense of what this city is. The architecture of place is not only bricks and mortar, steel and concrete. It is embodied in our human relations.

I love the inner city. I was born there, have lived there on many occasions. These days, however, when I think of the parts of my city I love best, I think of Dandenong or Springvale, where diversity isn’t just a mollifying bureaucratic rhetoric but something that slams you right in the face with an exhilarating potency. I love the Asian-city-within-the-city that is Box Hill, or the exuberance and vitality of Oakleigh, where cafes, defying the Puritanism of the city’s old establishment, feature cheeky stickers in Cyrillic script encouraging you to smoke. And before bloody Covid, I loved walking down Cramer Street in Preston on a Friday evening, checking out the hot guys on their way to mosque. Those parts of my city still feel missing from film. 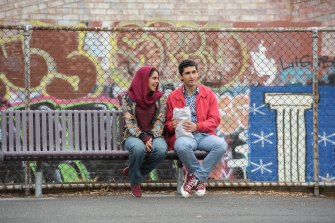 It may be that it is a new generation of filmmakers that will put the suburbs into the frame. I got a sense of this emergence when viewing Jeffrey Walker’s Ali’s Wedding (2017), where the romantic comedy was played out in the northern suburbs of the city. Co-written by Osamah Sami, the film is alert to how a new generation of migrant youth use and navigate Melbourne, and of how the suburbs are not merely places of ennui, but sites of dynamic interaction. Some of the most delightful moments in that film occur on station platforms all along the Upfield line. And that makes sense; it is where young people hang out in Melbourne. In a car-based city, the train stations and the tram and bus stops are integral to the architecture of the city, which means they are central to the architecture of our lives.

That long-ago night in Paris, it wasn’t the memory of the cold, grey metal of the escalators at Parliament Station that elicited the nausea of longing that is homesickness. Or it wasn’t just that image. It was hearing the Australian accent; it was watching Nick Cave and Dave Mason on screen and being reminded of clubs that stank of sweat and tobacco, in which I watched the Reels and the Birthday Party perform. It was remembering first seeing Ghosts . . . of the Civil Dead at the Astor Cinema in St Kilda, and then staying up all night raving and discussing and arguing about that film with friends. It reminded me of the people I love, which is the meaning of home.

I’d like the framing to shift when it comes to representing my city. I don’t want to lose the close-up.

This is an edited extract from Melbourne on Film, published by Melbourne International Film Festival and Black Inc on August 2. This year’s festival features a program of films made in Melbourne, including Ghosts … of the Civil Dead and Head On. miff.com.au