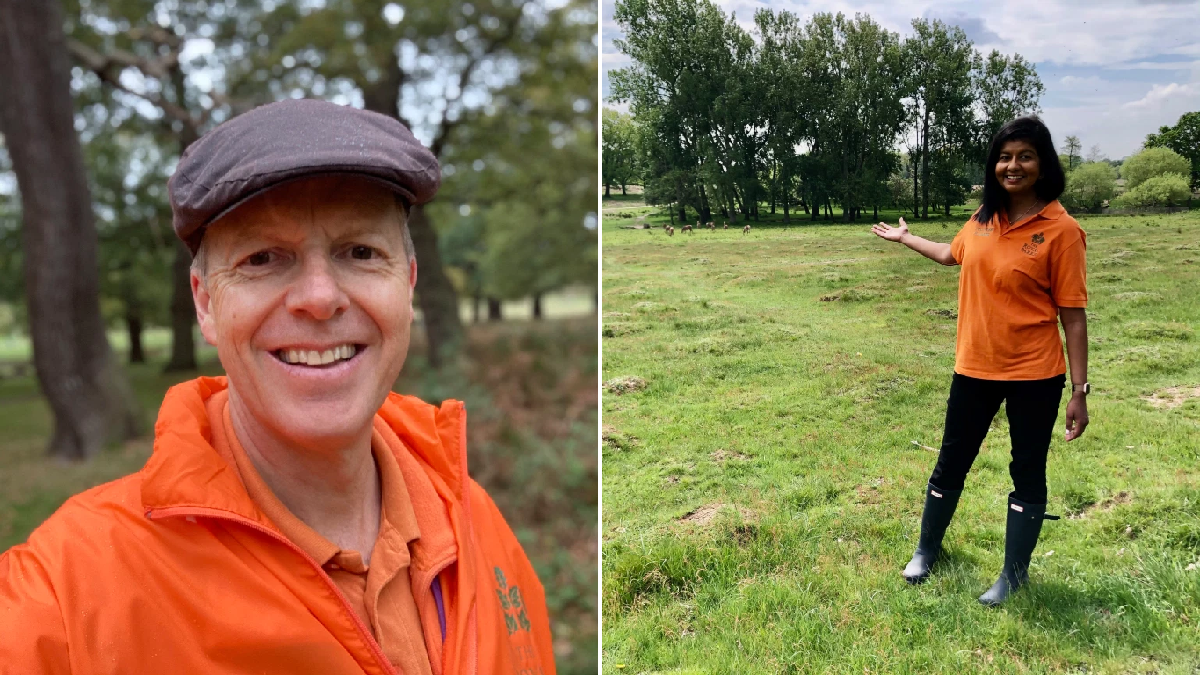 While you might have an idea of a rough, rugged ranger trekking through the wildest landscapes, the role of a volunteer with The Royal Parks is an altogether gentler, but no less worthwhile, venture.

Their project is relatively new, having started out as a three-year trial which, if successful, will be rolled out to more of The Royal Parks.

The role is to educate visitors, but what does that actually look like?

When asked what a day in the life of a ranger entails, Jo, who manages the team in Bushy, Richmond and Greenwich parks, explains that a volunteer typically works for two hours at a time, on any day.

It was their intention to make the role as flexible as possible, so people could fit volunteering around their work and other commitments.

Jo adds: ‘What they do is they meet their buddies – they go out in pairs – and then they just walk around the park.

‘They go to the busy areas where they know there’ll be lots of people or where you can almost guarantee there’ll be a herd of deer, and they introduce themselves to visitors and have a chat.

‘Honestly, they can talk about anything from what the deer eat and how far away you should be from the deer, to the fact that King Henry VIII is said to have stood on the top of one of the hills waiting for a sign that he could go and marry Anne Boleyn.

‘No day is the same, which is why they really like it, and it’s rewarding.’

She adds: ‘They’re there to educate, because we know there’s a lot of visitors come in who maybe don’t know as much about Richmond and Bushy Park.

‘You can come, and maybe you know there’s deer, but you don’t really know what that means, or you come and it’s massive and you don’t know where to go, so we just wanted to have a point of contact.

‘So there is someone there to talk to about anything, or who can give advice that helps people have a better time in the park and protects the parks as well.’

Duncan MacCallum, who works full-time and volunteers as a ranger at the weekend, has always been interested in wildlife and nature.

Duncan, who lives in Sheen, was inspired by the rangers he encountered in national parks while travelling through the US with his wife, telling us: ‘I remember returning from that holiday and saying to my wife that if I had my life again, I would love to have been a ranger.

‘Imagine my feelings when in late 2018, the Royal Parks advertised for their first volunteer rangers for Bushy and Richmond.

‘I think I was one of the first people to complete the application form.’

Dr Ramai Santhirapala, another volunteer ranger, has enjoyed living in Richmond near the park for years. However, Royal parks took on a whole new level of significance for her during the pandemic, and she wanted to find a way to give back.

She explains: ‘As a frontline worker during both surges of the pandemic, it became imperative to find ways to rest and recharge whilst dealing with the unpredictable intensity and rapidly progressing situation that was unfolding.

‘I would protect a morning a week to go for a long walk in Richmond Park and felt so rejuvenated by the varied landscape, colours and nature, including the deer. I would literally enter tired and leave energised.

‘It impressed on me how lucky we are in London to have these exceptionally well maintained green spaces open to the public. I knew I wanted to find some way to give back to the Royal Parks.

‘As a continued regular visitor of Richmond Park, using my time in the park to enhance and educate another’s visit felt like a brilliant opportunity.’

Duncan says he wakes up with ‘a sense of extra purpose’ on the days he’s due to volunteer.

He tells us being a volunteer ranger is ‘a privilege’, and describes a record time of 30 minutes spent answering the questions three young children had about the deer.

‘We even ended up discussing if Santa used red deer for his sleigh,’ says Duncan.

‘The best feeling after an encounter is when the group or individual leave us, thanking us for changing their day or transforming their visit.’

‘That makes it all worthwhile.’

Jo says that one of the things she and the rangers tend to enjoy the most is being able to talk to loads of people from different walks of life.

She adds: ‘That kind of contact and being able to help people learn more – learn from each other and from other visitors as well – they just really, really enjoy that.

‘Actually when I’m out with them, that’s the bit that I most enjoy is learning and helping other people have little moments of “Oh that’s so cool.”‘

Dr Ramai enjoys the flexibility of volunteering, which means she can fit it around her busy work schedule on the front line.

She says: ‘As someone from an ethnic community with a large extended family who is also a doctor, handling personal and professional commitments has been a wonderful balancing act from a young age. Best of the east and best of the west as some would say – never a dull moment.

‘So my volunteer days are varied and tend to work around life’s many other commitments. I think that is the nice aspect of the ranger role, it is flexible with plenty of options including the weekends.

‘Overall, the ranger role requires a commitment of four hours per month split into two hour slots, though many of us choose to do more simply because it is immensely enjoyable and satisfying.

‘It is time incredibly well spent. It keeps one creative and curious to know more about the parks.’

Dr Ramai also appreciates how welcoming the other rangers were, adding: ‘As someone who enjoys learning, getting to know the details of the Park has been fascinating – did you know there were as many yellow meadow ants in Richmond Park as there are people in the world?

‘One Ranger session included watching deer swim across a lake, a mother swan turn her eggs and listening to skylarks with a rare opportunity to see one during a fast swoop downwards.’

Since there’s such a heavy social aspect to the role, the rangers have found the isolating nature of the pandemic pretty hard.

Duncan says the pandemic had a ‘dramatic’ impact on his role as a ranger, explaining: ‘The parks saw an enormous increase in new visitors and to some extent Richmond Park, which is in fact a National nature reserve and Site of Special Scientific Interest (SSSI), became overrun.

‘Litter was a big issue as well as worrying signs of visitors surrounding the wild deer herds and causing the deer severe distress.

‘As a ranger I found that period extremely frustrating as we all believed we would have been able to assist in smoothing out some of those issues – however, understandably, we were unable to operate.’

Briony, who’s the volunteer programmes manager across all of the Royal Parks, tells us: ‘Yes, the pandemic has been difficult. We have had to pause our service on various occasions, when the lockdowns were at their highest levels.

‘We made the decision that we needed to lead by example and reduce contact where possible, even though actually it was probably a time when the parks were at their busiest.

‘It was a tough compromise, but we felt it was the best thing to do.’

She adds that, since things have begun to open back up again, they’ve had to adjust how the rangers operate, making sure they’re mostly seen rather than heard; only interacting with members of the public when necessary for the time being.

Briony says: ‘I know that they were really missed when we didn’t have them out there.

‘We had a lot of people asking when they would be coming back.’

Now, after having been closed to new volunteers because of the pandemic, they are once again taking applications.

If you’re wondering what kind of experience someone needs to get into volunteering as a park ranger, Jo says: ‘There is an application form, but honestly all we look for is people who love the park, and who are happy to go and talk to strangers.

‘We just look for talkative people who like to be outside.’

Briony adds: ‘Lots of them already come with their own knowledge that they want to share and that’s kind of the beauty of it.

‘They all come with their own bits of information and then go out with another ranger and share that information, so everybody learns from each other.

‘So we don’t really ask for any experience or set knowledge, because they just learn as they go and are just so engaged anyway that it just comes with time.’

To anyone thinking about becoming a volunteer ranger, Duncan would say: ‘I feel so lucky to be able to volunteer in what, in my opinion, is the most beautiful location in South West London – Richmond Park.

‘It doesn’t feel like a burden in any way. I love the park, so this is a way of giving back to the area in which I live in an environment that is special.

‘It’s also a great way to build strong friendships and the ranger group is a supportive and friendly team. We really enjoy one another’s company.

‘Volunteering is also a great way of building your own self-esteem.’

Meanwhile, Dr Ramai would say: ‘If you enjoy nature and the outdoors, working with people, learning and educating – this will definitely be a role for you.

‘The fact that you are giving back to the Royal Parks is a great feeling, as many have benefited from them during the pandemic, especially through lockdowns.’

If you’re interested in becoming a volunteer park ranger yourself, you can apply via The Royal Parks website.

The service in Richmond and Bushy Parks will reopen for applications once the current training phase has finished, while applications for Greenwich park this spring have closed.

Volunteers’ Week takes place 1-7 June and highlights the amazing ways people can give back and help others. To get involved click here.

Tags: London, volunteering, Work
You may also like
Celebrities News