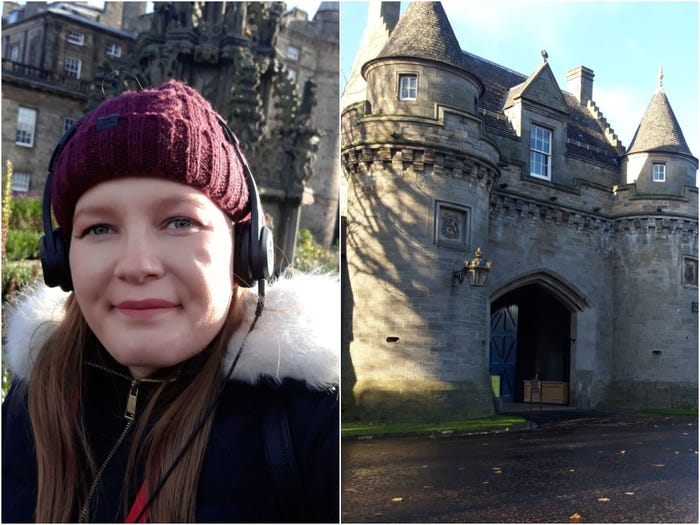 The Palace of Holyroodhouse in Edinburgh — Queen Elizabeth II's official residence when she visits Scotland — has a dark history. It's where Mary Queen of Scots' private secretary, David Rizzio, was stabbed to death in Her Majesty's private chambers back in 1566.

Some historians believe it was the Queen's husband who orchestrated the murder, as he believed Mary — who was heavily pregnant at the time — was having an affair with Rizzio.

In the years that followed, Holyrood Palace has been widely considered to be haunted, with some visitors insisting that you can still see the bloodstain near the window where Rizzio was killed.

I wanted to see for myself whether the place that our current Queen considers her home away from home is as eerie as it is made out to be, so I chose to spend Friday, November 13, at the famous palace. Here's what it was like inside.

The Palace of Holyroodhouse in Edinburgh was a 16th-century palace of the Stuarts and today serves as Queen Elizabeth II's official residence when she visits Scotland. 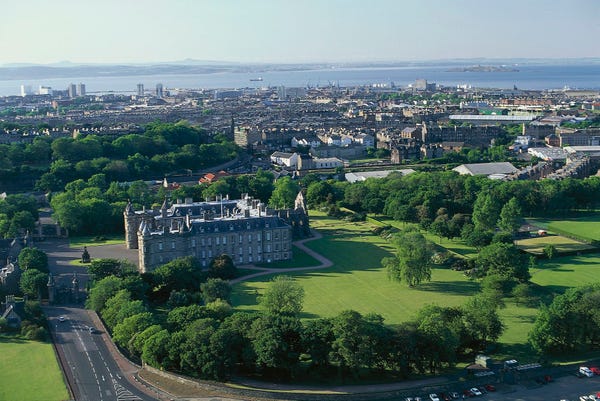 Every summer, typically near the end of June, the Queen has an annual visit to Edinburgh known as "Holyrood Week" or "Royal Week," as it's known in Scotland. She visits Scotland to honor its heritage and accomplishments.

It's worth noting, however, that the relationship between Scotland and England has always been fraught and remains so following the failed 2014 attempt for Scotland to leave the United Kingdom.

It's centrally located in the city near Edinburgh's Old Town at the end of the Royal Mile. It also sits on Holyrood Park, which is open to the public. 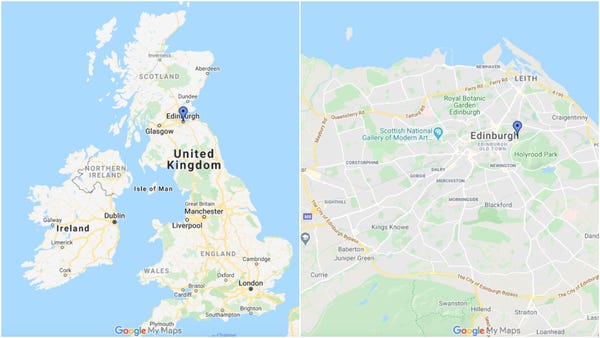 The palace is at the opposite end of the city to Edinburgh Castle and is across from the Scottish Parliament building.

The history of the palace is a bloody one, and today, it's said to be haunted. 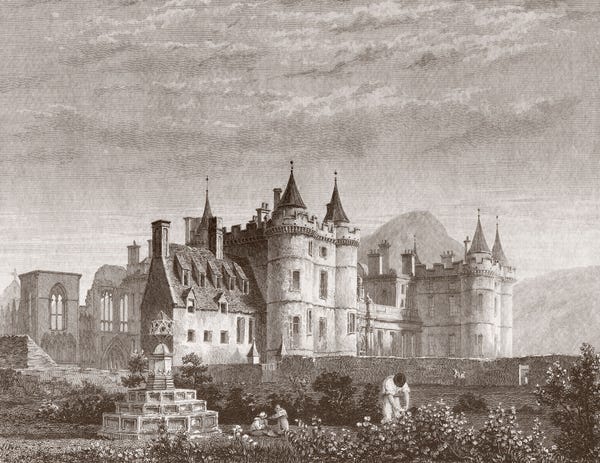 Holyrood Abbey — an ancient monastery located in the grounds of Holyrood Palace — was actually founded before the palace, in 1128.

The abbey had royal chambers which were preferred by the country's monarchs to the nearby Edinburgh Castle, a royal residence at the time.

The building that we now know as Holyrood Palace was built next to the abbey during the early 1500s.

The palace is arguably most well-known as being the location where Mary Queen of Scots' private secretary David Rizzo was murdered in 1566, in an attack that many historians believe was orchestrated by her husband, Lord Darnely, who thought they were having an affair.

Some people now think that Rizzio's ghost haunts the building to this day.

I went to visit Holyrood Palace on a cold Friday the 13th in November. It was just a one-hour train journey from Glasgow to Edinburgh Waverley station, followed by a 15-minute walk to the Queen's residence in the city center. 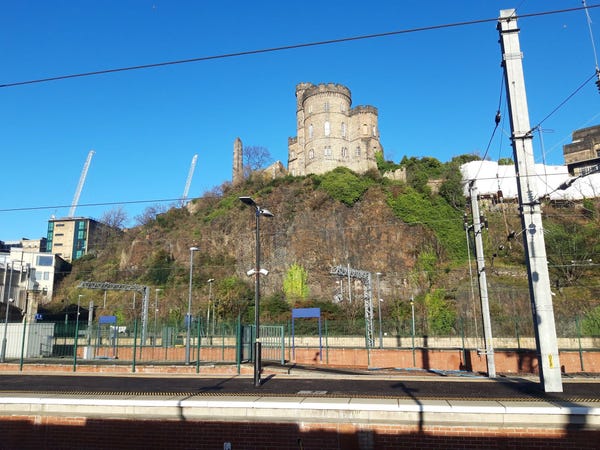 I arrived in Edinburgh to beautiful blue skies and a view of the famous Edinburgh Castle.

The palace gates reminded me of Buckingham Palace and did not look very inviting. 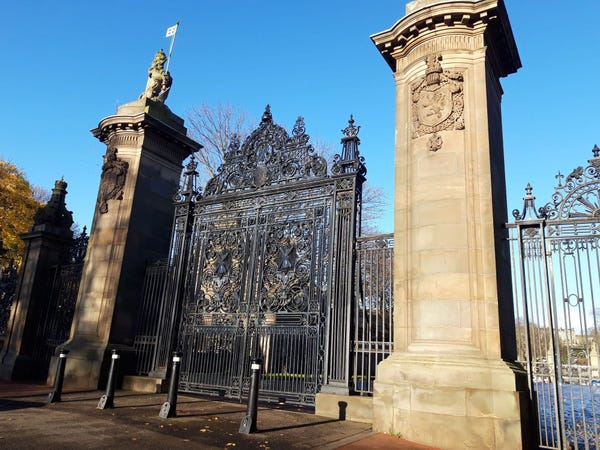 Thankfully, I soon realized I wouldn't have to wait to be allowed through the gates — there was another entrance around the corner for visitors with tickets.

Interestingly, the iron gates are also fairly new, dating from the 1920s and built as a memorial to King Edward VII, according to the BBC.

Contrary to the impressive gates, visitors are welcome at the palace. It costs £16.50 ($21.85) for an adult ticket to the Palace of Holyroodhouse, however, I was given a complimentary press pass. 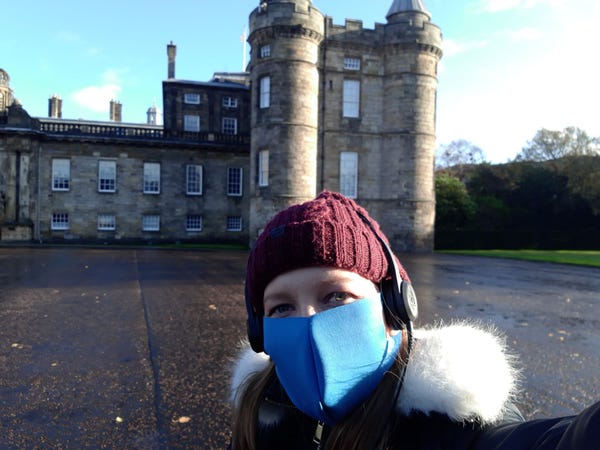 The process of entering the building and receiving my guided audio tour headset went smoothly as there were hardly any other visitors that day. I also felt safe as visitors and staff wore masks.

The audio guide instructed me to explore the palace exterior first. 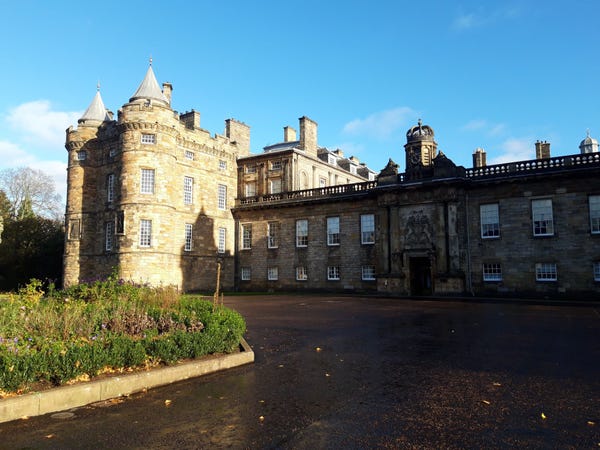 The sunshine and blue skies, however, didn't exactly give me spooky Friday the 13th vibes.

Royals themselves narrate the audio tour of the palace, which caught me off guard. 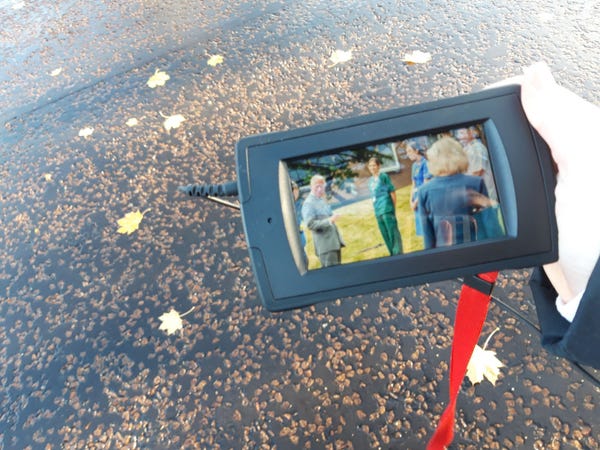 I was surprised to hear Prince Charles' voice at the beginning of the audio tour, giving a personal introduction and thanking visitors for coming to the palace. This later became a theme on the tour, with further narrations from Charles, Princess Anne, and Prince Edward.

The palace quadrangle was used for Zara Phillips' wedding reception in 2011. This is also where Her Majesty's office is based when she stays at the palace. 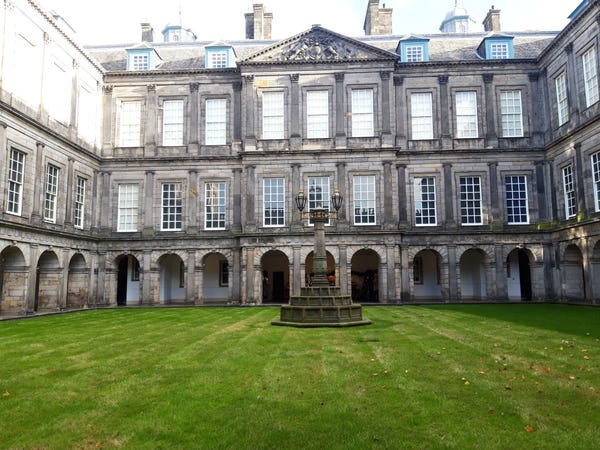 There were ropes along the side of the path preventing guests from standing on the lawn, however, I was able to follow the path to the other side, where the gift shop was located.

Then it was time to explore inside the palace, where I found the royal dining room. A staff member informed me that this is the room the Queen uses when she hosts official banquets, and she usually sits in the middle seat so she can speak with most of the guests. 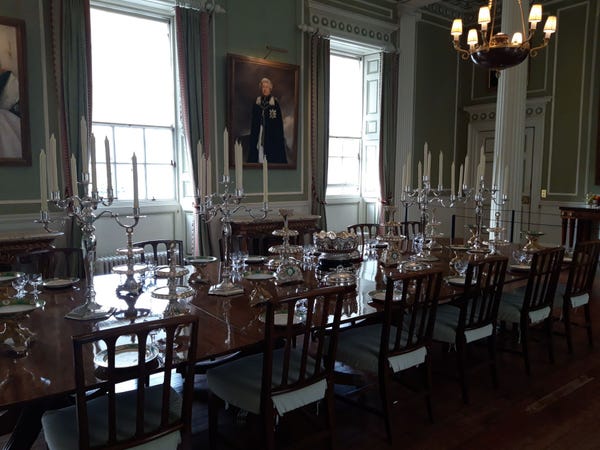 An oil painting of Queen Elizabeth II wearing ceremonial robes and the collar of the Order of the Thistle has been displayed in the center of the room since 2018.

It wasn't long before Princess Anne's segment of the audio tour, where she said she didn't believe the rumors that the palace is haunted: "In spite of its history, and people say, 'oh, isn't it haunted,' I've never felt that." 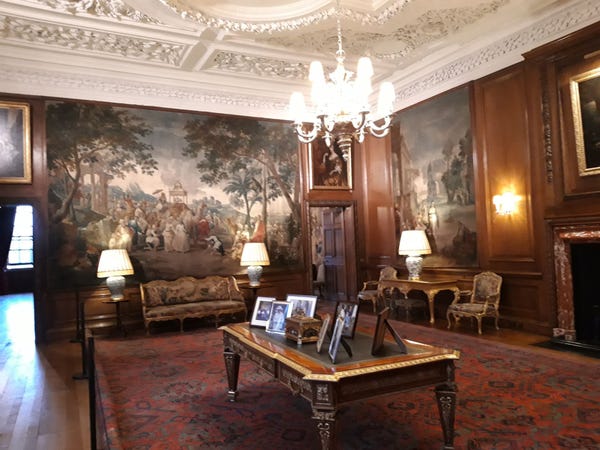 I wasn't sure I was convinced by Anne's words. The further I traveled through the palace, the darker and eerier the rooms seemed to be.

At first, I thought it was related to the dark colors of the furnishings in the sitting room (pictured) compared to the bright, pastel colors in the dining room. However according to the Royal Collection Trust, on dull weather days, you should expect the lighting can be particularly dim in certain parts of the palace.

Prince Edward, meanwhile, said during his segment of the tour that the palace always felt more like a home than a palace to him, adding that it has an "intimate and special feel which is unique among royal palaces." 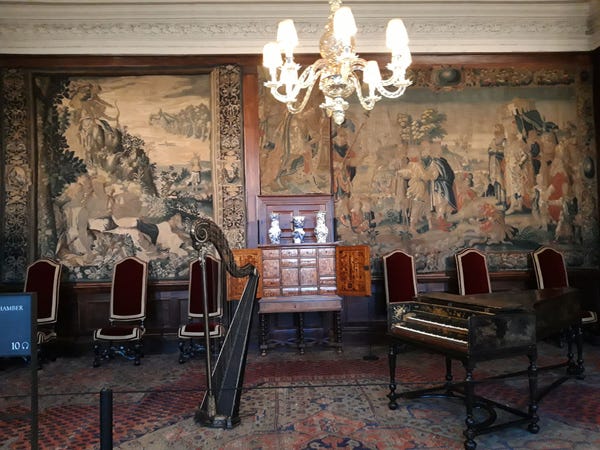 Perhaps this building isn't as large and grand as Buckingham Palace, but in no way did it feel small and intimate to a commoner like me.

There were various functions for all of the rooms, and the music room (pictured above) — formally titled the King's Closet —was initially designed to be used as a study but now instead features instruments on display.

As I climbed the dreary staircase that led to Mary Queen of Scots' bed-chamber, I found myself doubting the royals' opinions once again. 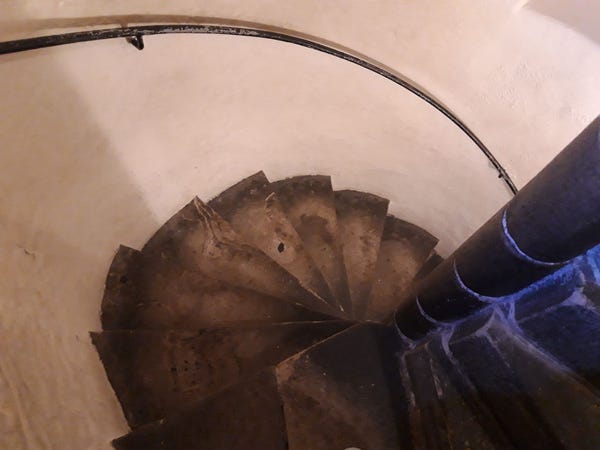 The 25-step spiral staircase was narrow and dusty, bringing home the historical and creepy feel to the building.

These were the stairs climbed by the men who went on to kill David Rizzio in Queen Mary's private chambers upstairs.

It was here, in Mary Queen of Scots' private chambers, that her husband Lord Darnely's plot to murder David Rizzo occured, according to the audio tour. 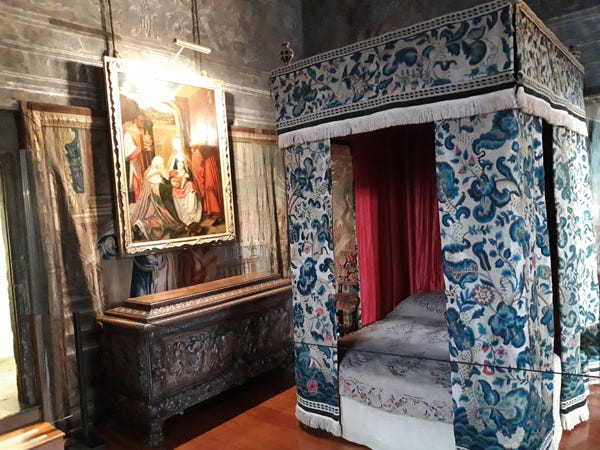 Mary's bed chambers (pictured) has a curtain separating it from her supper chamber, which is where the Queen, her ladies, and Rizzio were dining on the night that he was murdered.

A group of armed men traveled up the spiral staircase, through Mary's bedroom and into the supper chamber, where they dragged Rizzio away and into the outer chamber.

Historians say he was dragged into the next room — the outer chamber — where it's said he was stabbed 56 times by his assailants. 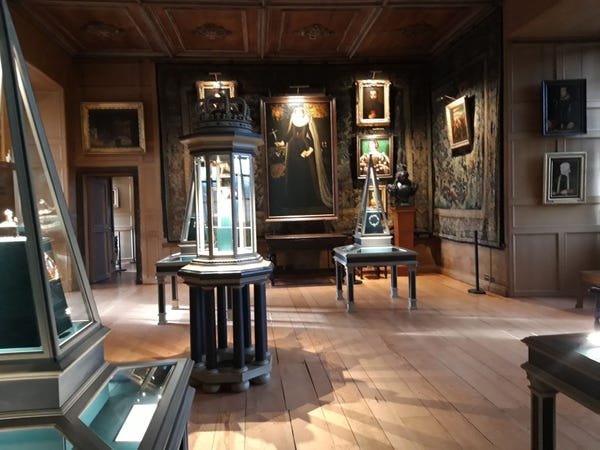 This is the room Mary used to receive visitors, which is now used to display Stuart and Jacobite relics that have been collected by various Scottish monarchs.

It's also the room where Rizzio was killed, and legend says you can still see a bloodstain near the window where his body was left. While I didn't see any stain — it was too dark — I was starting to feel unsettled by the dark history of this building.

Once back outside on the grounds, I walked along the palace gardens to view the ruins of Holyrood Abbey, used as royal chambers before the palace was built. 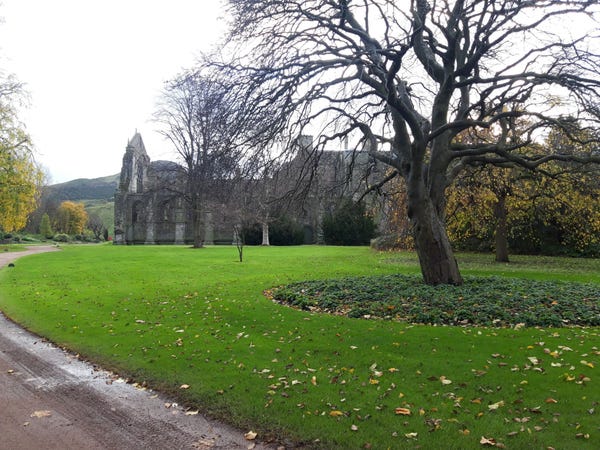 The now-grey skies and straggly looking tree made it look like a setting for a Halloween movie.

By this point, I had been at the palace for around two hours, and I was the only visitor in this area. 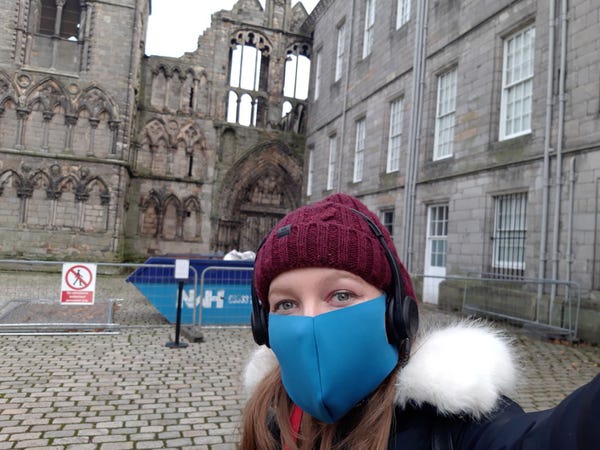 I was visiting during a weekday, so that was likely why there weren't many people around.

Or, perhaps, everyone else had enough sense not to visit a supposedly haunted palace on Friday the 13th.

After I left, I realized it wasn't just the palace that was quiet — the surrounding streets were also vacant of visitors. 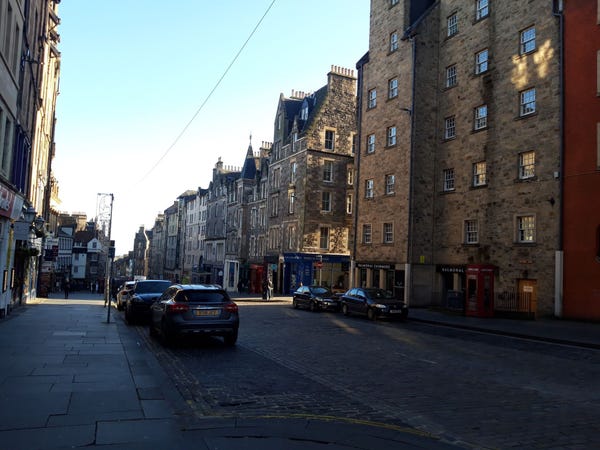 So it makes sense that the city would appear quieter without its usual influx of visitors from around the world during the COVID-19 pandemic.

Near the palace, I discovered Scottish and royal-themed gift stores. One, in particular, was selling a special tartan in memory of the late Princess Diana. 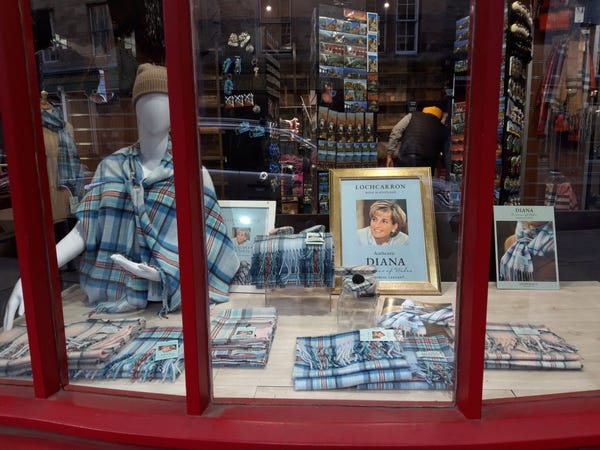 While most of the tourist stores seemed to sell Scottish and historical souvenirs, this was one of the only stores I passed that seemed to celebrate the modern royal family.

I then ventured over to the nearby Arthur's Seat, an extinct volcano and hilltop overlooking the city on Holyrood Park, just across the road from the palace. 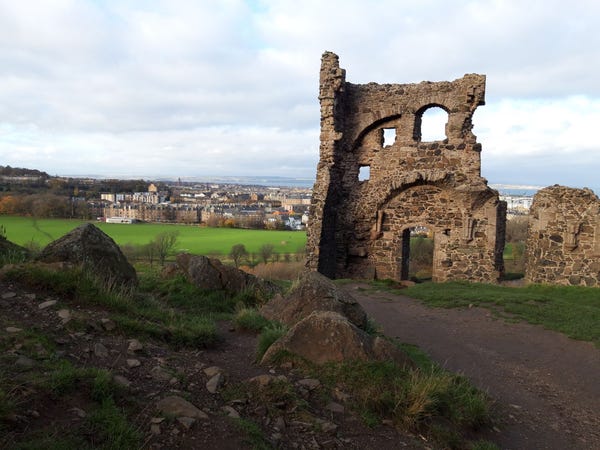 Arthur's Seat was formed from an extinct volcano, creating an 882-feet hill that overlooks the city, including Holyrood Palace which sits directly opposite.

Viewing the palace from this perspective was strange. After all, it wasn't as grand as Buckingham Palace. From this far away, it could pass for any regular building — not a supposedly haunted palace. 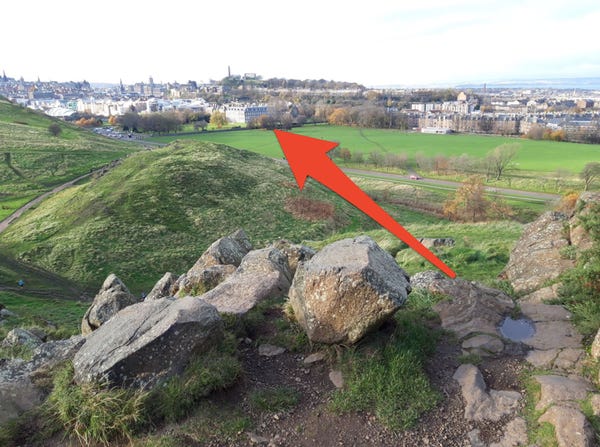 Overall, I thoroughly enjoyed my experience at the palace, and I especially loved that the audio tour was narrated by the royal family themselves.

I also enjoyed learning about the palace's dark past. The story of Mary Queen of Scots and David Rizzio is something that the royal family don't shy away from — maybe because, as Princess Anne said, they may not believe the rumors that it left the palace haunted.

While I can't say whether the palace is haunted, it certainly is the creepiest residence I've ever visited — and this will be remembered as one of the most amusing and unusual ways that I have ever spent Friday the 13th.

Tags: Lifestyle UK, Royal Insider, U
You may also like
Celebrities News