When writer Lindsay MacMillan moved from the US to London alone during the pandemic, a madcap quest for connection turned into a lesson in self-discovery.

“Hiya, cardboard sign girl!” a voice said through the phone. “It’s the lad waving from the steps. Do you have any extra burgers on that boat?” I scanned the crowd on the King’s Cross canalside to locate the mystery man. Quite a few people were waving and taking pictures of me and the sign I was holding up, which had nothing but my mobile number written on it.

It was the first sunny day of June last year, and I was standing on the roof of a canal boat at a barbecue I’d been invited to by a friend of a friend of someone who’d taken pity on me. I’d moved to London from America just a few weeks before. Alone. In a pandemic. Without knowing a single soul.

It was a thirst for adventure that had pulled me here. After more than a year of lockdowns, I was ready to get out and explore, to reclaim my independence as a modern woman. When the pandemic hit in March 2020, I had fled Manhattan, where I was living and working on Wall Street, to move back in with my mum in my Michigan hometown. Unexpectedly, I met and fell in love with a gem of local guy, and we spent 10 happy months together going on ice cream dates, bicycling through cornfields and roasting s’mores down by the lake. 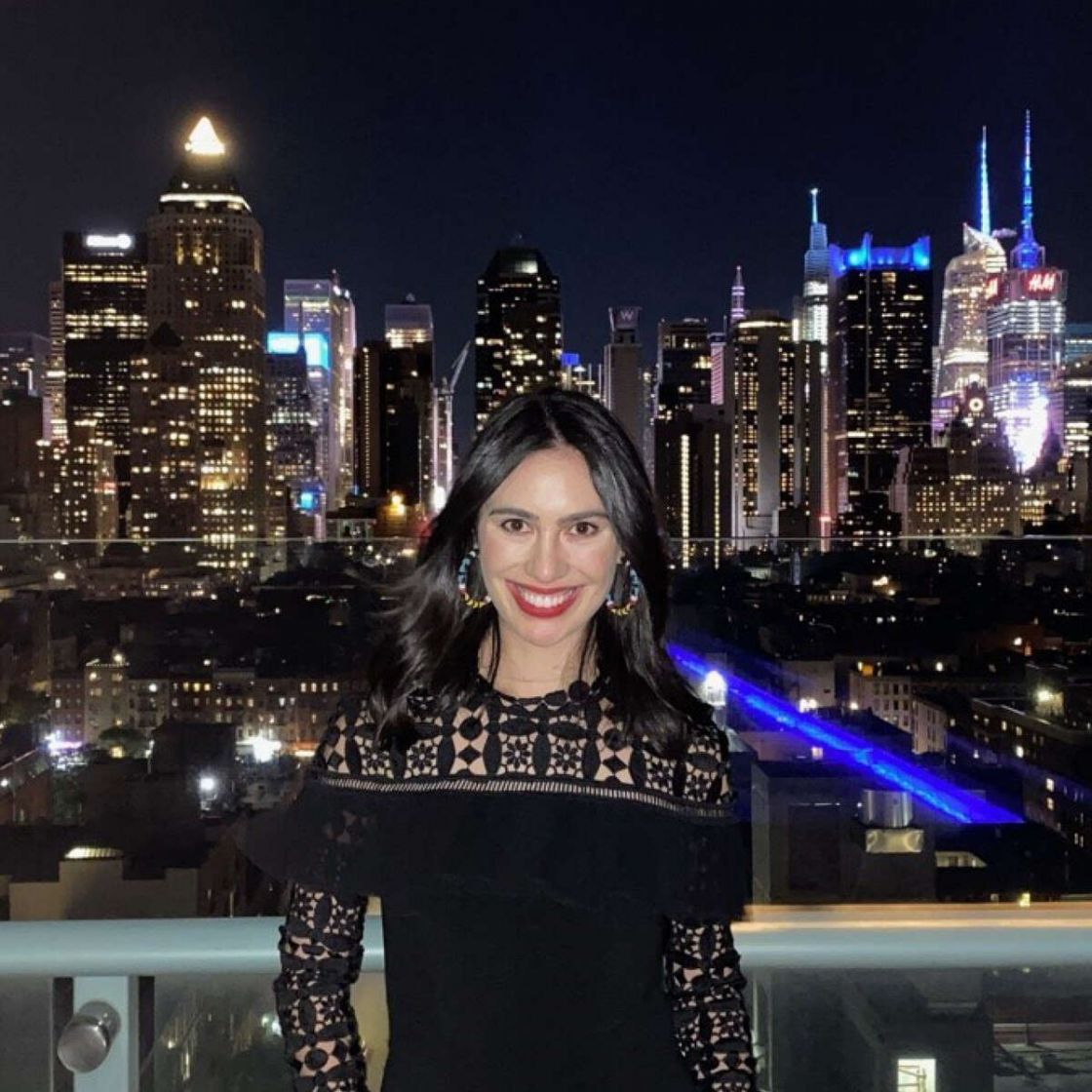 When the pandemic struck, Lindsay left New York to move back in with her mum

This small-town life was a much-needed respite from the rat race, but I soon felt the itch to spread my wings and travel. I wanted to see who I was and who I could be without any security blankets. So, I got my company to transfer me to its London office and decided to take an official break from my boyfriend – I needed space to get the perspective I was lacking in our bubble.

My first few weeks in the UK were very lonely. I was stuck in quarantine, subsisting on Deliveroo and imaginary conversations with the passersby outside the window of my Airbnb. When I was finally free, I was a bit overzealous to mingle with real humans again and immediately leapt on the invitation to the canal boat. “How do you meet people in a new country?” one of the women on the boat asked after I told her my story. “Especially in lockdown.”

“Good question,” I said. “I guess I’ve just got to be a bit shameless, haven’t I?” Spying a piece of cardboard on the boat, I wrote my mobile number on it and held it up for the whole city to see. It started out as a joke, a way to get some laughs. But to my surprise, the calls and texts started flooding in as the boat cruised along Regent’s Canal.

“Hiya! Your sign is the best thing I’ve seen in ages. Keen to get to know you… coffee soon?”

Swept up in the sudden rush, I was curious to see if this brazen tactic could be my secret to breaking through the British reserve and making friends – or even finding a new love. Could a real connection come from a cardboard sign? There was only one way to find out. I leapt grandly off the boat and onto the riverbank to share a cheeseburger with the guy on the steps.

Later in the week, he took me out to Sushisamba. (“You risked your life crossing a body of water, it’s truly the least I can do,” he texted me.) He was charming and handsome; the date was straight out of a romcom – except that I spent the whole time missing my ex and wishing I was curled up on the couch with him instead.

At the end of the night, my Sushisamba suitor gave me a cheeky kiss through my face mask. It felt very metaphorical; we’d had a great time, but I hadn’t let him see the real me. I’d played the “life-of-the-party American girl” character I thought he’d come for, but I’m actually very introverted and much prefer books over beer. I’d worried that being myself would bore him right out the door. 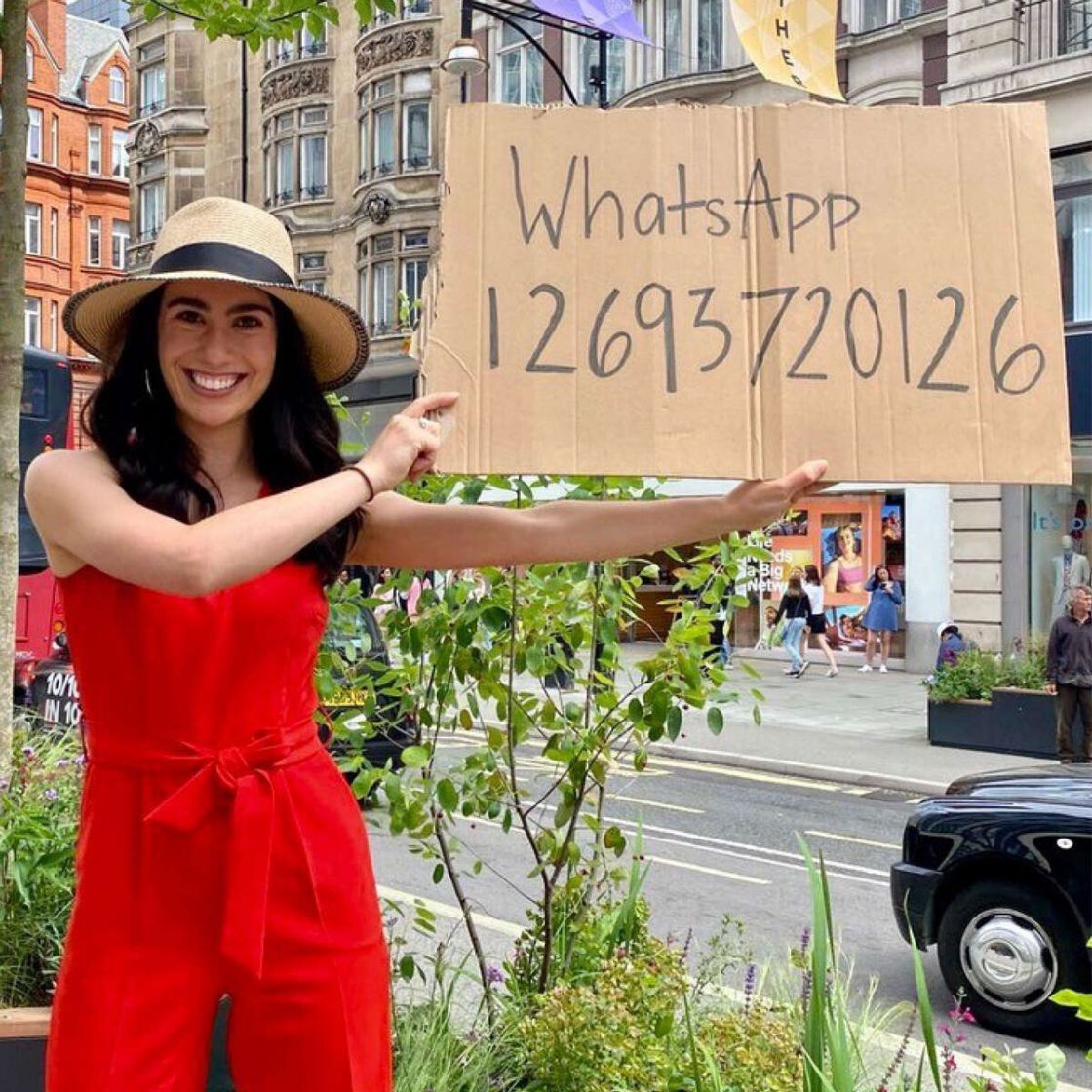 Not ready to give up on my experiment, though, my sign and I kept travelling around London in pursuit of new connections – from the upper deck of buses and the top of Parliament Hill to the centre of Oxford Circus. Sifting through dozens of texts and calls, I spent the month of June going on more dates. There was the French entrepreneur who boasted about how his company was too top secret to talk about, an Englishman who spent the whole meal trying to convince me we were living in a simulation and a South African environmentalist who asked if I could watch his pet iguana while he was away.

Aside from a couple of guys who ghosted me before the dates or texted at 2am with an eloquent “U up?”, there were surprisingly few creepy or cringeworthy encounters. Maybe it just takes a lot to faze me after years on the dating app scene in New York, but there were absolutely no horror stories – or great love stories, either.

All the dates followed a similar plot. I’d put on my bright red lipstick and American smile but inevitably get that empty feeling and invent a story about why I needed to leave. On the Tube ride home, I’d write poems about my ex in my iPhone notes.

I resisted texting him in these moments because I didn’t want to yank his emotions up and down, but we’d talk on the phone every Sunday. Each time I heard his voice, I became more convinced that although the European accents might have turned my head for a minute or two, they’d never turn my heart away from my good-to-the-core American man. I missed the way he saw and cherished every unglamorous part of me. The only sign I wanted to hold up was one outside his window that said: “I love you, come to London.”

It started to become clear I wasn’t going to meet my soulmate from a cardboard sign. But what about mates? I hadn’t had to try so hard to make friends since uni, when everyone around me was in the same boat. Now in my late 20s, it felt like everyone had their established networks and I was the outsider needing to poke my way in. It was a novelty on some days, but an emotional drain on others as I revved myself up for the “about me” chatter after a long day in the office, trying hard to present my most lovable and witty side. It gave me sweaty flashbacks to girl-flirting during sorority rush, a time when I so desperately wanted to be chosen that I morphed myself into whatever version I thought the person I was talking with wanted me to be.

For my final friendship date, though, I felt a shift. I showed up in trainers rather than heels, still sweaty from a workout. “Just so you know,” I told the woman as we sat down. “I’m not the kind of extroverted person who holds up a sign with her number on it.” She grinned back. “Well, I’m not the kind of person who texts the number on a random sign, but it’s been so long since I’ve met new people and I guess I just thought… what’s there to lose?” Surprisingly – or perhaps unsurprisingly –that interaction went better than any of the others. We met up again for a picnic in Hampstead Heath, and again when she and her boyfriend had me round for a cosy dinner one night – which is when I finally admitted that I was feeling homesick.

The cardboard sign social experiment was exhilarating, exhausting and unexpectedly empowering. Because as well as meeting other people, it helped me meet myself again: a woman who can break out of her shell and into a whole new country; a woman who’s fiercely independent but ultimately craves a teammate, someone she doesn’t always have to be ‘on’ around. I no longer felt I had to try so hard to dazzle just to be worthy of love.

“Will you say yes to a second date if I write you a letter every day?” The guy from Sushisamba texted me. Despite the cinematic chivalry of it, I declined and told him I was going to try long-distance with my ex. I felt peace and pride in closing that door. It was a sign that I was finally learning that growing doesn’t necessarily mean throwing away the old and chasing after the new. Rather, it means listening to the whisper that says you’ve already got what you’ve been searching to find.