How to have a Michelin-starred feast of romance: Just one catch… since you can’t leave home, you’ll have to buy and cook the whole thing!

While most couples mark Valentine’s Day with a romantic night out, this year is going to be very different. Thanks to lockdown, there are no pubs, restaurants, shopping trips or nights at the cinema, which is why my husband Martin and I recently ended up marking our pearl wedding anniversary with cheese sandwiches and tins of G&T on a chilly park bench.

Now, as we approach our first (and hopefully last) Valentine’s Day in lockdown, I’m desperate to make it special. But despite my best intentions, I’m not an inventive cook and am in need of professional help if I’m to pull off a swanky dinner for two.

Step forward Tatler, which has thrown open its address book to allow the public access to some of the starriest names in haute cuisine. Together with website Learning With Experts, the society glossy has curated The Tatler Menu, an online cookery school led by four top chefs who demonstrate how to create Michelin-standard dishes from the comfort of your home.

Each has prepared sessions guiding home cooks through two of their signature dishes. Chefs include the Michelin-starred Ollie Dabbous of London’s Hide, Ormer Mayfair’s Kerth Gumbs, Peter Gray from Heston Blumenthal’s The Hind’s Head in Bray, Berkshire, and Bake Off: The Professionals judge Benoit Blin, who is Chef Patissier at Raymond Blanc’s Le Manoir aux Quat’ Saisons. The videos are all pre-recorded and cost between £29 and £35 a course, though for £430 you can get personal feedback for all four. 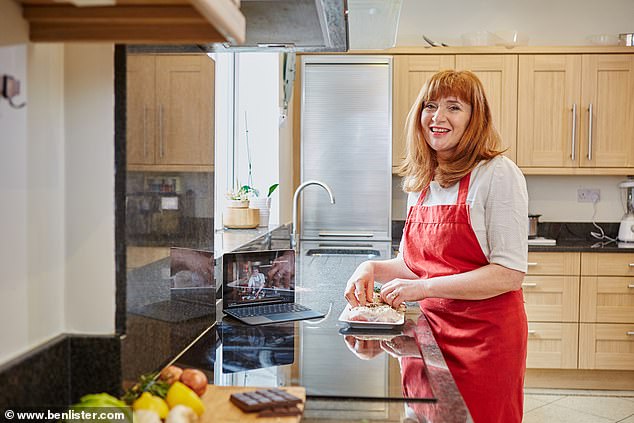 I signed up for all the pre-recorded courses at a cost of £120 then baulked at the bizarre ingredients list, which included soybean powder and galangal (me neither).

Sidestepping my usual Tesco for a Waitrose shop, I was surprised to find all the ingredients I needed, even though it cost me £120. I set aside the best part of two days to try to pull off all four courses.

I nearly choked on my Chardonnay when Ollie Dabbous proclaimed good cooking isn’t about ‘complicated processes or methodology’. Clearly, he hasn’t tried to make a coffee cup out of chocolate.

His appetiser of gem lettuce served on ice with a camomile dip scattered with caramelised seeds and herbs such as dill and mint was relatively straightforward. Made from garlic oil, lemon dressing, virgin rapeseed oil, mayonnaise and camomile, there were just lots of component parts to produce the finished result.

His style is crisp and cool. He’s also easy to keep up with, just as long as you have all the ingredients ready and weighed.

Next up was Kerth Gumbs, a smiley chap whose butternut squash velouté, Thai green curry foam and a buttery shortbread biscuit were relatively straightforward.

While I didn’t master the curry foam, the soup turned out rich and tasty — and was quite easy to make (though I drew the line at serving it in a hollowed out butternut squash). 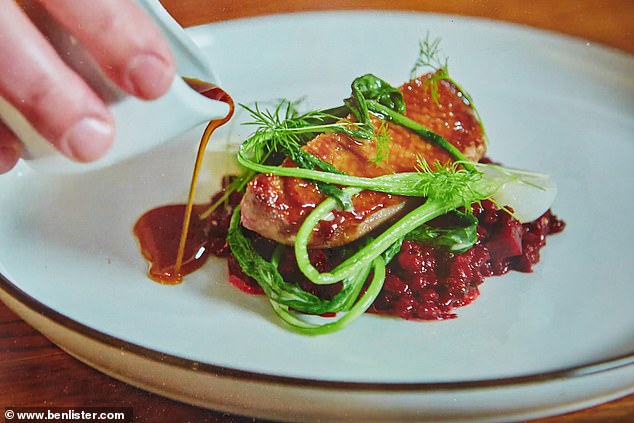 Peter Gray on mains is a different vintage. Explaining how to prepare his duck with beetroot barley and Heston’s triple-cooked chips, his tone smacked of a bank manager sorrowfully refusing a mortgage. However, his recipe was easy to follow and he offered lovely morsels of detail.

The duck was a triumph, while Heston’s chips were a sensation. You make these by cutting 16mm chips — I used a ruler to check — out of a good potato. The spuds are then boiled, chilled, fried to a light golden brown, chilled and then fried in plastic cup-size portions.

Far more faff than my normal method (i.e. open a bag of McCains) but deliciously crisp on the outside and fluffy on the inside. 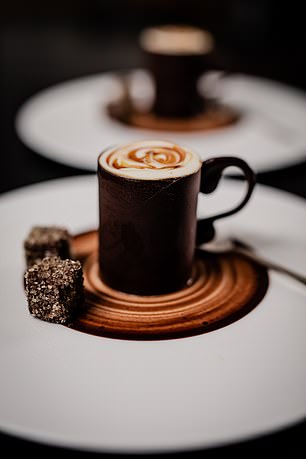 The most challenging part was dessert, where Monsieur Blin is on hand to guide us through Le Café Crème — a coffee cup sculpted from chocolate filled with espresso parfaits, and topped with kirsch sabayon.

Here, we entered a world of blow torches and food thermometers to recreate a dish Raymond Blanc took six months to perfect.

I managed most of the bits save for the chocolate coffee cup itself, which requires serious technique.

To make the cups you need to spread chocolate thinly over an acetate rectangle and slide into a plastic ring to hold the shape. Then you use a paper piping cornet to make S-shaped cup handles.

Thankfully, on his website Raymond Blanc suggests freezing the parfait in a terrine mould, then slicing to serve. I do as he says and save the broken chocolate shards to snaffle later.

Even by my modest standards, the dishes were riotous to the palate. My presentation was lousy but the symphony of flavours is a universe away from anything I’ve made before.

However, by the end of the first two courses, the husband was ravenous. ‘Any more shortbread biscuits?’ he wondered mournfully.

Unless you’ve got time on your hands and are something of a foodie, making four Michelin-starred dishes is quite an endeavour.

Later, I asked my husband if the meal had been one to remember. He smiled benignly — I couldn’t tell if that was a yes — then disappeared to put the kettle on.

If you’re after a cheaper alternative, Waitrose is the only British supermarket with a dedicated cookery school.

This year its chefs are running a virtual Valentine’s Day cookery class to master the perfect rib-eye steak with bone marrow butter. You simply sign up for the £20 course online, buy the ingredients from your local shop or butcher and receive Zoom details and recipe sheets to print out ahead of time.

Unlike the Tatler course, this is done in real time on the evenings of February 12, 13 and 14. I’m offered a specially arranged preview under the tutelage of Rebecca Roberts, who has learned with Michel Roux Jr. Alongside her is Helen Carey, who trained as a pastry chef with Marcus Wareing. 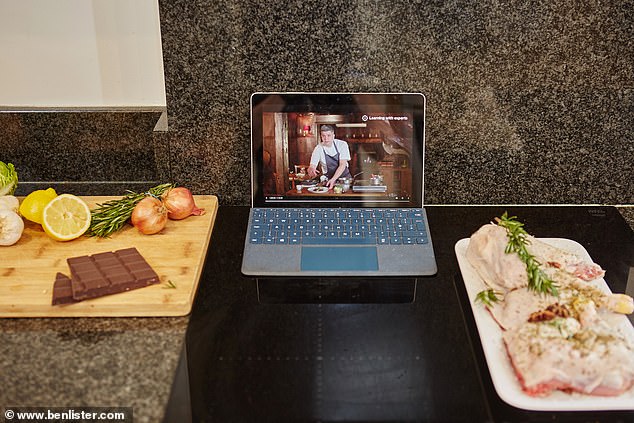 The Tatler Menu is an online cookery school led by four top chefs who offer tips. Pictured: Angela follows the recipe via Zoom

We started by making bone marrow butter by mixing the mushy bits from the middle of cooked bone marrow with butter. Then we placed whole portobello mushrooms on a baking tray and scattered with freshly chopped flat leaf parsley. I was thinking this was a doddle.

Even the delicious peppercorn sauce for the steak is idiot-proof. It’s made from brandy, beef stock, whipping cream and Dijon mustard. Along the way, the two chefs offer helpful tips.

When I told Becky and Helen my dry, aged ribeye steak was bleeding so badly it needed to go to A&E, they reassured me it was just the cooking process. I have a long history of ruining steak. This time, I was so keen not to burn the meat, I cooked mine too quickly so that it looked overly raw in the middle. Everyone else’s looked better. Helen suggested that after we logged off, I cooked the meat for a few more minutes. 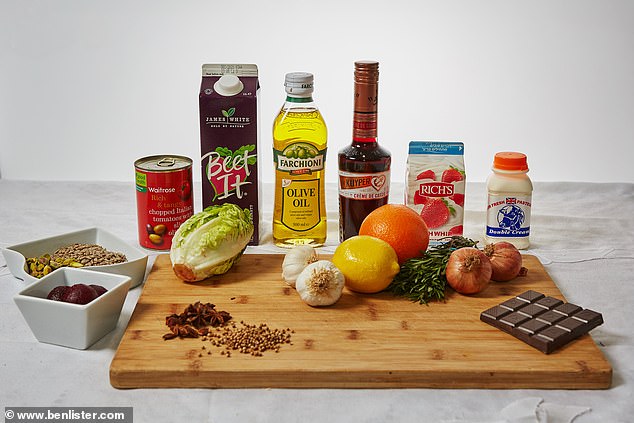 The suggestion was to serve with a side of fresh watercress and a heap of Waitrose chips, which you just heat up, but we decided to sidestep the carbs.

The result was delicious. The mushrooms, cooked in the oven and, glossy from the bone marrow butter, looked magnificent. After placing back in the pan for a few more minutes, the steaks were gently chewy. The sauce veered cheekily between spiky mustard and peppercorn and the smooth cream and butter.

My husband was impressed. He told me it was the best steak I have ever made and literally scraped the plate clean.

This has been old-fashioned, hand-holding cooking with the enormous benefit of getting feedback immediately. I drained more brandy and said cheers. I felt like a top chef.

Tags: A, have, how, Michelin-starred, to
You may also like
Celebrities News