When Maree Edwards received the news that she would become speaker of the Victorian parliament, she allowed herself a rare moment of retrospection.

“The journey has been quite extraordinary,” Edwards said. 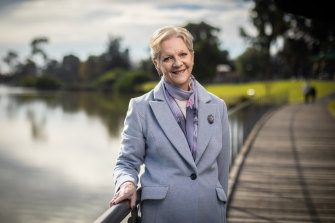 Indulging in self-reflection doesn’t come naturally to the 60-year-old Labor MP for Bendigo West, who, unlike many of her colleagues, never dreamed of a life in politics.

“I have had to work for what I have achieved, it hasn’t just been presented to me on a silver platter. I have a sense of pride because I have done it on my own,” Edwards said.

But that pride belies a gritty determination spurred by loss and grief.

In 1995, life changed suddenly for Edwards when her husband, Lindsay, was diagnosed with a brain tumour. She was 33, a mother to four children. She was still breastfeeding her baby son.

Edwards had met Lindsay, an amateur apiarist, when he visited her family’s property in central Victoria to learn more about bees. He was training to be a teacher and Edwards followed him to Bendigo, Brisbane and then Benella, where they started their family.

With time seemingly on their side, the couple returned to Bendigo where they purchased a modest home on a large block to the east of the regional city where they planned to raise their children. Lindsay set up a huge vegetable garden. They kept chooks, bees, ferrets, goats and pigs.

They had four children in just over seven years, living off one wage, most of which went on the mortgage as interest rates peaked at 17 per cent.

But Lindsay’s sudden cancer diagnosis changed the course of her life and forced her to confront a future alone as a single mum. 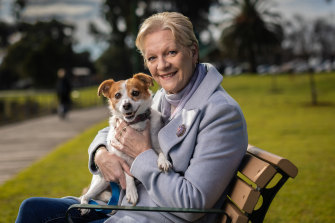 “I don’t know how I did it”, Edwards, 60, says of her years jugging the roles of student, carer and mother.Credit:Scott McNaughton

“I knew Lindsay was going to die, it wasn’t a secret and I guess I am a pragmatist,” she said.

Having abandoned her first undergraduate degree as a teenager, Edwards returned to university to study a Bachelor of Arts, juggling the competing roles of student, carer and mother, something she describes as “all consuming”.

“I just had to finish, to get a job, to look after the kids because there was no one else,” she said. “I don’t know how I did it.”

One night, Edwards took her two oldest children into Bendigo for sport, leaving her youngest two children at home with their dad. Lindsay suffered a seizure, forcing the two children, not yet at primary school, to jump on their bikes and ride to their neighbours for help.

“After that, I never left him home with the kids.”

“You can’t protect children fully. At one level they understood but at another, they just wanted to keep on with their lives. There is no guidebook. In retrospect, I might have done things differently, but we just got on with it.”

Surgeries, chemotherapy and rehab became part of the family’s life. Until his pain and seizures became too much.

After a seven-year fight, the cancer returned and in the depths of darkness, Edwards had to tell her four children their father wasn’t going to make it. 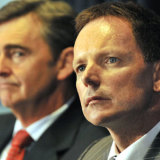 “It was the hardest thing I have ever had to do. It was horrible.”

Ten days before he died, Lindsay went to palliative care. The last thing he did was to take the bins out. The family was there the night he died. Staff brought pizza and played games with the children. Then, they said goodbye.

The pain and loss seemed unbearable. Edwards describes herself as simply functioning, not living. She was 40 and working part-time as an electorate officer for then Bendigo West MP and Bracks government minister Bob Cameron.

It was a job she enjoyed. Importantly, it helped pay the bills.

Edwards had been raised in a Labor family. Born in Maryborough in 1962, the daughter of two union factory workers, politics was openly discussed at home.

For Edwards, politics was an interest that turned into a passion and ultimately a career when she was elected as the member for Bendigo West in 2010, following the resignation of Cameron.

Reconstructing her life and family, Edwards was motivated by her husband’s advice.

“Lindsay said; ‘Live your life. Don’t mourn me forever. Get on with your life and make sure the kids do too’,” she said.

His advice cut through the fog of grief. Twenty years on, it still motivates her.

Grief of this kind never disappears, Edwards says. But she has found happiness in her children, her grandchildren, through her work, and with her now-husband Steve, who she married 10 years after Lindsay’s death.

“I couldn’t do it without him,” she said.

As speaker, just the fourth woman to have the job, Edwards will be the arbitrator of democratic debate in parliament. It can require a thick skin and will likely force Edwards to occasionally upset her own side of politics.

“I think I am fair, I try to adhere to the rules and I don’t let too much through," she said.

“You are probably going to put some people off side. But I don’t think much about what people think of me. I just get on and do the job.

“Perhaps that comes from the experiences I had where you just have to get on with the work to get you through.”