When Victoria Thaine returned to work after maternity leave, a “gorgeous hippy earth mother” suggested she make her own formula to supplement her breast milk.

“Maybe you should check with a doctor?” her close friend and fellow actor Petra Yared suggested gently. 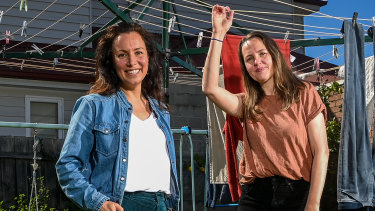 Petra Yared and Victoria Thaine are friends in real life, and now star in a comedy series about best friends who think they know each other until they become mothers.Credit:Justin McManus

Yared’s character Sonia in Sonia & Cherry, a comedy about best friends with vastly different approaches to parenting, is a lot more caustic.

In truth, Thaine and Yared have never clashed over parenting styles.

But Thaine, who wrote, directed and starred in Sonia & Cherry, was struck by the new observations she made with friends after they had children.

“The women that you think are going to be the most laidback parents in the world end up being quite neurotic, and the ones that are uptight sometimes surprise you by being freewheeling mothers,” she says.

“Petra and I had this lovely experience of having similar career trajectories and raising children of a similar age. I just thought it would be great fun for us to work together. So, really just following the adage of write what you know, I thought a comedy series around parenting would be great.”

Even in the fog of early motherhood the two women mined their lives for material. Once a friend told them over coffee that kangaroos have three vaginas.

“So their f… -hole is different from the hole they give birth through,” Sonia shrieks in an episode. “They don’t have to do pelvic floor exercises for the rest of their lives.”

Sometimes Yared and Thaine would call each other: “Oh my god, I’ve got a zinger!”

“It’s kind of heightened and ridiculous, but everything in the scripts were stories that we came across,” Yared says.

“We might not have personally met someone who’d had the orgasmic birth, but we would overhear a conversation in a park or catch up with some other girlfriends and come back to each other with stories.”

While comedic, the series touches on darker themes; traumatic births, postnatal depression, mum-shaming and being drunk in the middle of the day.

Cherry’s “amazing” fantasy birth in a birthing pool with the local Glee West choir singing while the baby was born ended in an emergency caesarean three days into labour “with enough drugs to tranquillise a horse and a bladder injury that means she can’t piss on her own.”

“The fantasy birth versus the reality is pretty much word for word what happened to me,” Thaine says.

“We tend not to talk about that stuff. I think it’s because you want the next person to have a really good experience. You don’t want to burst people’s bubble, but I also wish that we talked a little bit more about what to expect or what could happen.” 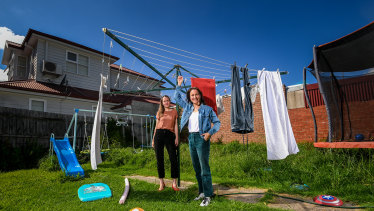 Mum Facebook groups were also a source of inspiration. One local mother was upset because she had borrowed a car which didn’t have a booster seat in it to drop her child off at daycare, and when she did so another mother admonished her, later sending a text pointing out child restraint laws. The stickybeak mum then took her criticism one step further, saying she noticed the child was dropped off at childcare by different people, implying that she was farming her son out rather than parenting herself.

“She was so deeply hurt and furious, and I lifted that almost word for word into one of our episodes,” Thaine says. “Sonia has drunk a little bit too much and is reeling from this attack from another mother. It’s so primal that hurt that you feel when someone criticises your parenting.”

The second season of Sonia & Cherry, a six part series on Facebook and YouTube, is produced by Naomi Mulholland and funded by Screen Victoria under the online project category.

Yared says the pair realised during rehearsals it was important viewers saw that, no matter how ridiculous the characters or the scenarios, the love the mums had for their children was never in question.

“It’s quite comically dark, but I think the point we’re trying to make is we’re always trying to present this image of being the perfect mum,” Thaine says.

“My character Cherry, she’s got the deck of positive parenting cards, and she’s making the formula, she’s into the attachment parenting, she’s sort of desperately doing all of that, but it’s becoming her undoing.”

Thaine wrote Sonia & Cherry to challenge the idea of the perfect mother in a world where parents are overwhelmed with advice.

“We are saying it’s okay if you mess it up every now and then. We get that sometimes you might behave in a way that isn’t ideal but no one’s perfect.”

Tags: Formula, Homemade, mum-shaming
You may also like
Celebrities News