There are days for whizzbang moods. This wasn’t one of them: HENRY DEEDES sees a joyless Boris Johnson at the Downing Street press conference

One could hardly expect the Boris to be in one of his whizzbang moods yesterday.

After all, his dear old mum had died the previous day. Rotten thing about being PM sometimes. One of those jobs that requires you to Keep Buggering On (as Churchill put it) when your personal circs are far from tickety boo.

Sure enough, the figure standing before us at the Downing Street press conference really didn’t seem like Boris at all. He looked joyless. Sounded it too. The usually buoyant voice was low and dull, as though he’d been gargling gravel.

It didn’t help that he was swaying between those two hawkers of horror Chris Whitty and Sir Patrick Vallance. This often happens when the PM gets together with the boffins. A dark cloud descends over him. Scientists instil fear in him. He becomes sullen. Neutered. Jack Nicholson in One Flew Over the Cuckoo’s Nest brought into line by cold-hearted Nurse Ratched. 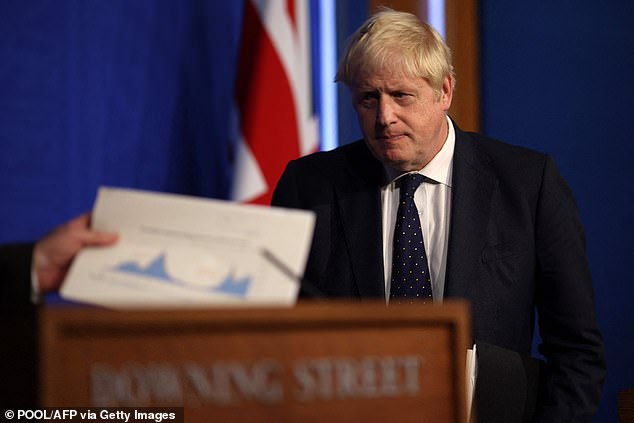 He had come to announce plans for dealing with coronavirus this winter. Should things turn sticky, there could be a return to working from home and ruddy face masks. Vaccine passports remain a distinct possibility. The irreversible road map? Not quite the one-way satnav route we were promised.

Quite why it was felt there was a need for such an announcement wasn’t clear. Hospital admission rates remain eminently manageable. It felt like another exercise in keeping us on our toes.

I once had a teacher who tried to achieve the same effect by turning off the heating in class. He thought it focused minds. It didn’t. The usual Boris might have kicked off by reminding us how far we had come since January. Instead, he pointed out that infection rates were higher than they were this time last year. ‘Covid is still out there,’ he warned.

The only vague Borisism came when he talked about turning ‘jabs, jabs, jabs into jobs, jobs, jobs’. Even then, he gave a cowered look to his right as though expecting Professor Whitty to deliver him a sharp clip around the ear.

The chief medical officer was in one of his foreboding moods. His eyeballs flickered and did panicked little loop-the-loops. ‘Winter is coming,’ he remarked, his tone dark and gulpy, like the voiceover on a Hollywood trailer.

ITV’s Robert Peston was among the journalists back in the room. We hoped he might have learned the subtle art of brevity. No such luck. Pesto reminded us he’d recently been struck down by the virus. But enough about me, why weren’t tighter restrictions being brought in now, he asked. Wasn’t he once a business journalist? 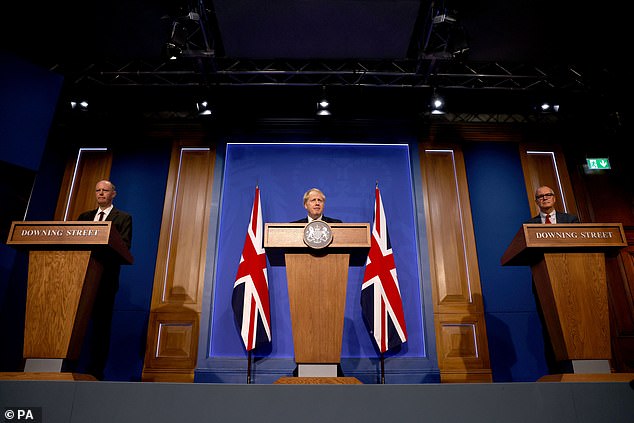 After all, his dear old mum had died the previous day. Rotten thing about being PM sometimes. One of those jobs that requires you to Keep Buggering On (as Churchill put it) when your personal circs are far from tickety boo

Things took an odd turn when a chap from The Times brought up Nicki Minaj. Whooo? She’s a US rapper. Nuttier than a Lion bar. Yesterday she unhelpfully tweeted that the vaccine made men impotent. Whitty frowned. Boris pleaded ignorance of any of twerk-prone Miss Minaj’s saucy oeuvre. A likely story.

Earlier, Health Secretary Sajid Javid had outlined the Government’s plans in the Commons. The reaction to the Saj’s statement from the Tory benches was something less than ecstatic. Not quite as stony as the reception MCC members gave Ian Botham back in ’83 after getting himself out for a duck. But pretty close.

When the possible reintroduction of face coverings was mooted, Sir Desmond Swayne (Con, New Forest W) let out an exasperated howl of ‘Noooooooo!’

Sir Graham was disappointed PCR tests had not been scrapped for those returning from abroad. Not only were they expensive, they were pointless. Behind him, David Davis (Con, Howden) growled about the ‘poor quality of decisions’ made by ministers during the pandemic.

The Government ship is not quite mutinous. But there is grumbling down in the galley.

Tags: A, Bo, DEEDES:, HENRY, joyless, sees
You may also like
Celebrities News