Mermaid love! Halle Berry had the perfect reaction after a fan mistook her for Disney’s newest princess Halle Bailey.

The Catwoman star, 55, was recently tagged in a fan appreciation post about Bailey, 21, and her upcoming role as Ariel in the live-action version of The Little Mermaid — but she didn’t mind the mix up.

“Can’t wait to see you under da sea,” a Twitter user wrote, adding a mermaid emoji. Berry was quick to clear up the accidental tag, replying on Monday, December 27, “… wrong Halle lol.”

The Oscar winner added, “I can’t wait to see her too though!” 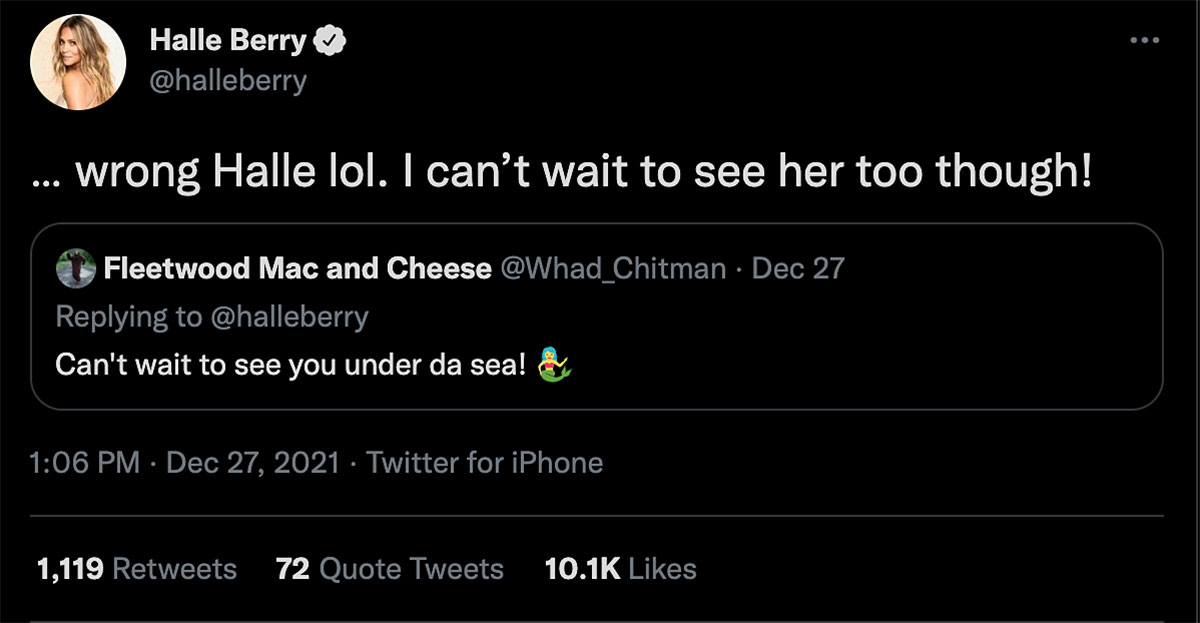 While most of Berry’s fans were aware of the name mishap, some jumped on the idea of having the Ohio native as a part of the underwater story line.

“Both @halleberry & @HalleBailey in the new #TheLittleMermaid movie would be so #iconic,” one user replied to Berry’s correction tweet.

Another fan praised the Die Another Day actress for getting mistaken for a younger celebrity, writing, “Gotta love being confused with someone 30+ years younger than you, though! Says a lot about how gracefully you have aged!”

This isn’t the first time that fans have been confused by the similar names of Berry and Bailey. When Disney first announced that the Grown-ish star would be playing Ariel, it threw some people for a loop as they misread the last name.

“Legit spent an hour trying to figure out why Disney cast Halle Berry as The Little Mermaid,” one person wrote at the time. “Then I realized it was Halle Bailey. I can’t be the only one…”

Another fan tweeted, “So, Halle Bailey is gonna be the Little Mermaid and that’s fine because I just googled her and it turns out, she’s not Halle Berry, who I thought was gonna be in The Little Mermaid … all day long, seriously.”

In addition to people getting Bailey and Berry mixed up, the Chloe X Halle singer received some backlash for her casting, as the 1989 animated character was white with red hair, while the Georgia native is Black.

Jodi Benson, who voiced Ariel in the original Disney film, however, showed support for Bailey.

“I think that the spirit of a character is what really matters. What you bring to the table in a character as far as their heart, and their spirit, is what really counts,” Benson explained at Florida Supercon in July 2019 per Just Jared. “And no matter what we look like on the outside, no matter our race, our nation, the color of our skin, our dialect, whether I’m tall or thin, whether I’m overweight or underweight, or my hair is whatever color, we really need to tell the story.”

Bailey, for her part, expressed her excitement over landing the iconic role in July 2019, tweeting, “Dream come true… 🧜🏽‍♀️🌊.”

Haters aside, Berry has always been in Bailey’s corner — and not just because they have the same first name. Shortly after news broke of the actress’ casting in The Little Mermaid, the Monster’s Ball actress sang Bailey’s praises on Twitter.

“In case you needed a reminder … Halles get it DONE,” the John Wick: Chapter 3 — Parabellum star wrote in July 2019. “Congratulations on this amazing opportunity, we can’t wait to see what you do!”

The Last Holiday actress replied, “This means the world. happy to share names with you. Love you lots.”