A poll found that 49 percent had symptoms and more than a third of them – 37 percent – had only become afflicted in the last five years. Charity Allergy UK said the increase could be linked to climate change and rising temperatures. Amena Warner, at Allergy UK, said: “There is evidence that climate change, with increasing temperatures, may contribute to extending the grass pollen season in the UK. Grass pollen is the cause of the majority of pollen driven hay fever symptoms. 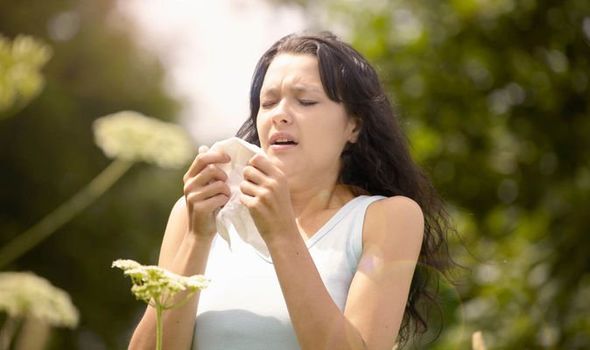 “Furthermore, with warmer weather, pollen counts can be high as a response to high atmospheric levels of carbon dioxide.” It polled 7,000 people in partnership with Kleenex to mark the start of Allergy Awareness Week.

More than a third of sufferers are concerned about spending time outdoors, almost two thirds report tiredness due to poor sleep, while nearly half of workers said it affected their concentration. Yet 44 percent had never discussed their hay fever with a doctor.

However the blossom didn’t put off Samantha Gibson and daughter Rosie, three, who went to the Tai Haku Cherry Tree Orchard in Northumberland yesterday.

Met Office forecaster Martin Bowles said: “Over the next few days temperatures are going to be dropping a bit to 59F in the South and 53F in the North.”

Tags: autoplay_video, headlines, Uploa
You may also like
Celebrities News