It’s good news for The Bad Guys: the DreamWorks and Universal film topped the US domestic box office on its opening weekend, in a positive sign that heralds the post-pandemic return of families to the cinema.

The film, which cost an estimated $97 million to make, grossed $33 million in North America, contributing to its global total of $121 million – DreamWorks’ biggest non-sequel debut since The Boss Baby in early 2017. 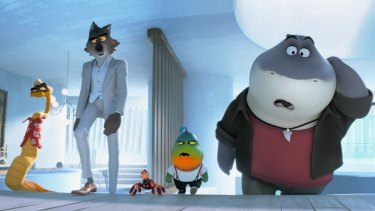 The Bad Guys is an animated action-comedy that follows five criminal creatures trying to redeem their bad ways in a heist-style story that pays homage to the likes of Quentin Tarantino and Guy Ritchie. The film is an adaptation of the book series created by Bendigo-born Australian author Aaron Blabey.

The film was up against Robert Eggers’ viking epic The Northman, the Harry Potter franchise’s Fantastic Beasts: The Secrets of Dumbledore, Sonic the Hedgehog 2 and the Nicolas Cage comedy The Unbearable Weight of Massive Talent in the battle for top spot.

“The very positive critical and audience reaction to The Bad Guys echoes the over-performance of our title at the domestic box office this weekend – and deservedly so, as this is a broad, action-packed, charming film with clever comedy for the entire family,” a spokesperson for Universal Studios said.

Released in Australian cinemas on March 31, three weekends before the US, the film made $1.89 million on its opening weekend. By comparison, Sonic the Hedgehog 2, which was released on the same day, made $3.65 million.

But as school holidays draw to a close, the numbers have picked up. This weekend saw $2 million raked in for The Bad Guys, contributing to its overall $11.8 million domestic gross – 9 per cent of the total global box office.

Sonic the Hedgehog 2, which has made $203 million in the US so far, is expecting to take over the original film’s lifetime US domestic box office of $207 million.

The success of both The Bad Guys and Sonic the Hedgehog 2 would come as a relief to Hollywood executives who have been concerned about whether families would return to the cinema after the pandemic.

It’s a concern that has led other kids’ films, such as Disney’s Encanto and Turning Red, to skip cinemas and head straight to the small screen.

Compared with other Easter weekends, the films are on the right track to pre-pandemic box office numbers: Disney’s Dumbo (2019) had a domestic $2.65 million opening weekend.