A Georgia woman who moved there from South Carolina must give up ownership of an exotic African car after the pet escaped and went inside a neighbor’s home, according to reports.

Pet owner Anna Fyfe said owning serval cats was legal in South Carolina – and she brought the pet to Georgia, where she moved to attend college, the Atlanta Journal-Constitution reported. But owning servals is illegal in Georgia, the newspaper reported.

Fyfe said she wanted the pet with her for emotional support after a personal relationship ended, the report said.

“She really helped me get through everything. … I couldn’t have got through any of this without her,” Fyfe told the paper.

But the cat – named Nala, after a character from Disney’s “The Lion King” – was reported loose June 30, and Kristine Frank, a woman living nearby, claimed the animal was on her bed one recent morning when she woke up. It had gotten inside her husband left a door open for their dog to go in and out of the house, she told the paper. 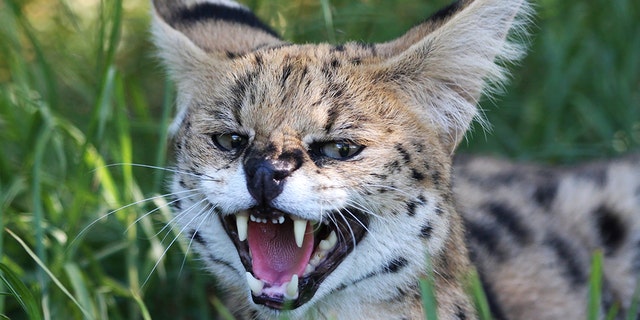 “I just heard this thump on my bed, and I felt something land in my bed,” Frank told the newspaper. “I opened my eyes and there was this cat in my bed staring at me.”

Frank called the incident “very frightening,” and said she didn’t believe such a cat belonged in a residential neighborhood, the paper reported.

Fyfe said she would prefer that the cat be returned to her so she could send it back to South Carolina.

Authorities did not plan to charge Fyfe in connection with the case, the Journal-Constitution reported.

On Thursday, the Georgia Department of Natural Resources (DNR) said the cat was being kept at a temporary location until it can be moved to a wildlife sanctuary.

The Animal Legal Defense Fund said it has offered to place the cat in a sanctuary in North Carolina, Atlanta’s WSB-TV reported.

Fulton County Animal Services had been alerted to the area after receiving three calls about the escaped cat, the Journal-Constitution reported.

A DNR official said the cat was to be moved Thursday to a new home but wouldn’t provide a specific location.

Servals can weigh around 30 pounds and run up to 50 miles per hour, the newspaper reported.

Tags: Georgia, must, owner, Pet, surrend
You may also like
Celebrities News