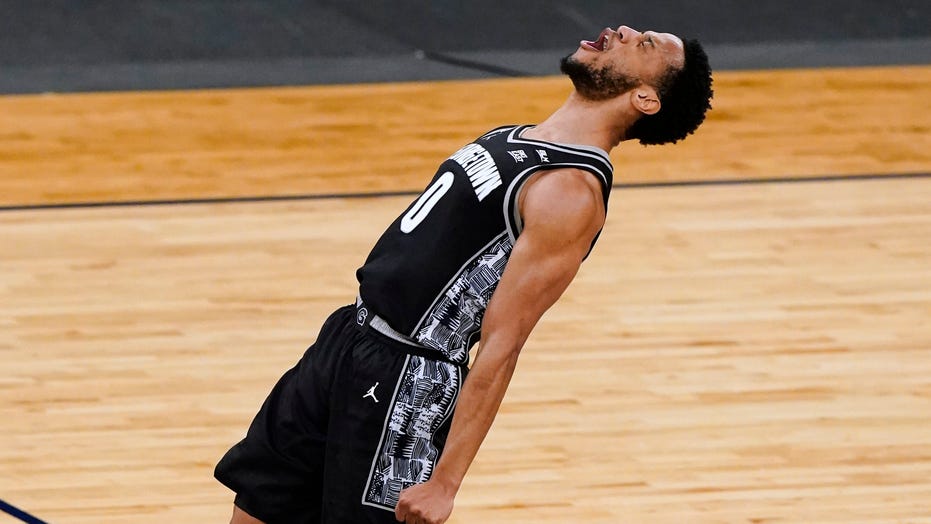 His house after all, right? Must be his kitchen, too.

Where one more W spells NCAA.

Jamorko Pickett scored 19 points, Chudier Bile made big plays on both ends down the stretch and Georgetown reached its first Big East championship game in 11 years with a 66-58 victory over Seton Hall on Friday night.

Dante Harris added 15 points for the eighth-seeded Hoyas (12-12), making a surprising March run with three straight wins at The Garden — where Ewing’s retired No. 33 New York Knicks jersey hangs in the rafters.

“The gumbo is working,” Ewing said. “As a chef, it takes some time. I’m stirring the pot, stirring the pot into gumbo, coming together, putting in the right ingredients for it to come out and for me to be top chef.”

Georgetown will try to win its first Big East Tournament crown since 2007 on Saturday night and the automatic NCAA Tournament berth that comes with it. The resurgent Hoyas face second-seeded Creighton, ranked No. 17 in the nation, after the Bluejays beat No. 3 seed Connecticut 59-56 in the second semifinal.

Win or lose, Georgetown has already become the first team to reach the tournament title game after getting picked last in the league’s preseason poll.

“We’ve come a long way,” said Ewing, a dominant Hoyas big man when they were beasts of the Big East in the 1980s.

Ewing proclaimed “This is my house” after the Hoyas upset top-seeded Villanova 72-71 in the quarterfinals Thursday. Then he complained about the frequent stops around MSG to check his credentials.

“Everybody in this building should know who the hell I am,” Ewing said.

Either way, his team is making a name for itself.

“I mean, that is just Georgetown for you, since back when he was playing,” Pickett said. “Georgetown has always been known for being the team that is going to do whatever it takes to win.”

Jared Rhoden had 22 points but was the only scorer in double figures for the fifth-seeded Pirates (14-13), who have dropped five of six.

“Every team goes through their bad times and I feel like we hit our bad time at the wrong point in the season,” Rhoden said. “It happens to the best of them.”

With Pickett playing tight defense as well, Seton Hall star Sandro Mamukelashvili managed only eight points on 3-of-16 shooting — just the third time this season he failed to reach double digits. The 6-foot-11 senior played 44 minutes Thursday as the Pirates needed overtime to get past No. 4 seed St. John’s.

“Sometimes he was talking trash a little bit too much,” Ewing said about Pickett. “But he did a fantastic job.”

Mamukelashvili, who shared the Big East player of the year award with Villanova teammates Collin Gillespie and Jeremiah Robinson-Earl, did contribute 10 rebounds and five assists in 39 minutes.

Bile’s three-point play gave Georgetown a 60-57 lead with 1:36 remaining. Rhoden went 1 for 2 from the line before Qudus Wahab, who had 10 points and eight rebounds for the Hoyas, did the same.

Bile and Wahab then combined to block a driving layup attempt by Shavar Reynolds Jr., and Harris sank all three free throws after getting fouled by Reynolds on a 3-pointer. That made it 64-58 with 21.4 seconds left, and Pickett canned two more foul shots to seal it.

“I think they were a little bit more feisty. They executed some good plays and made some big plays at the end,” Rhoden said.

Georgetown made five of its first six 3s and led by 11 in the first half. The Hoyas have won five of six and are 9-4 since a three-week virus layoff.

“The COVID pause helped us out a lot,” Pickett said. “I can’t say what specifically happened that created the change, but it was definitely needed. And we’re playing great now.”

Georgetown has won seven Big East Tournament titles, tied with UConn for the most of any school. But the program’s most recent trip to the championship game came in 2010, a 60-58 loss to West Virginia. Before a 68-49 victory over Marquette in the first round Wednesday, the Hoyas hadn’t even won a Big East Tournament game since 2016.

No. 8 seeds are 0-2 in Big East championship games, with the last appearance by Georgetown in 2010.

After making all 23 free throws in Thursday’s victory over Villanova, a tournament record, the Hoyas hit their first eight this time until Wahab missed with 3:55 left in the first half. Georgetown finished 18 for 25 (72%) from the line and led for more than 34 minutes. Seton Hall was 5 of 11 and was ahead for only 71 seconds.

Georgetown split two games in seven days with Creighton in early February, upsetting the then-No. 15 Bluejays on the road in the first meeting.

Seton Hall coach Kevin Willard said he was leaning against going to Texas to play in the NIT if the veteran Pirates are offered a bid.

Tags: beats, Georgetown, Hall, Seton, to
You may also like
Celebrities News