Most Stephen King fans know his work exists in two worlds. First, there's the page, where images of psychotic, otherworldly clowns, reanimated pet corpses, the ghosts of murdered young girls and haunted cars are injected into our imagination. Then there's the screen, where we actually see them.

These worlds are not always kindly to each other. While many consider Stanley Kubrick's 1980 adaptation of the writer's beloved The Shining to be one of the greatest horror films ever made, King himself famously despises it, calling it "a big, beautiful Cadillac with no engine inside it." To say it's possible to adapt his work in a manner that satisfies everyone would be an exercise in absurdity. But what is it exactly that makes him so difficult to translate, and why do so many people try? 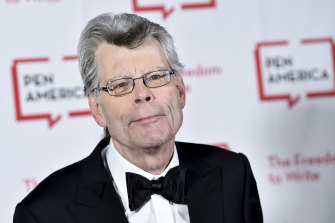 Stephen King, pictured in 2018, isn’t always impressed with the screen adaptions of his books.Credit:AP

Richard Price, the hard-boiled crime novelist and screenwriter known for his work on The Wire, The Deuce and The Night Of, is the latest to take a crack at the horror king with his HBO series The Outsider. The highly successful show, which wrapped its first season Monday night (AEST) on Foxtel's Showcase, follows a police officer who makes a well-informed murder arrest – only to discover there's far more to the case than rational science can explain. (To say more would be to enter spoiler territory.)

Price hadn't considered adapting King when he began reading him in 1974 – the two were listed then in the Saturday Review (US magazine dedicated to literature) as new notable writers – though he enjoyed his work. One of King's gifts, Price said, is "he'll always give you a really good story, a story to hang your hat on." The key is that his horror stories aren't scary without reason, but that they're "grounded in humanity. . . . You can take every monster that he creates and make it into sort of an avatar for whatever neuroses or anxieties people have in the world."

As much, if not more so, than most of his novels, The Outsider exemplifies this tightrope. Price particularly liked the character of Ralph Anderson, the cop whose "life and profession is based on hard facts." As he wrote the screenplay, he focused on one central question: "What would it take for a guy like that to be convinced to let go?" With a mandate from HBO to create 10 episodes, Price had to stretch the source material, so he imagined himself in Ralph's position, trying to figure out what would convince him to believe in something otherworldly, and began plotting that out.

Therein lies one of the primary challenges in adapting King's work: taking something so interior (in this case, doubt) and making it visual. "When you're making a movie, you have to get rational at some point. You have to be aware that you're speaking in a different language," said Andy Muschietti, who directed the latest iteration of It and its sequel It Chapter Two.

Price believes a similar philosophy: "The worst thing in the world you can do when adapting something is being too respectful of it, because the thing that you're being respectful of are things that are irrelevant [to the screen]: the beauty of the writing, the narrative voice, the sequences of events."

Price and Muschietti are two of the many filmmakers adapting King, who has seen a bit of a boon lately on-screen. After It came out in 2017 and made $US700 million (about $1 billion) at the global box office, "suddenly everyone was greenlighting and fast-tracking their Stephen King properties," said Kevin Kolsch, who directed 2019's Pet Sematary with Dennis Widmyer.

Kolsch and Widmyer's movie is about the ability to bring creatures back from the dead, though they might be changed. The family at the story's center begins by bringing back a cat. Then, a daughter. What makes it so frightening, Kolsch said, is that "this is about death. It's a not a werewolf or something that none of us will probably run into. But we're all going to have to deal with death. . . . The key to making people's skin crawl is to create scares that tap into people's universal fears." 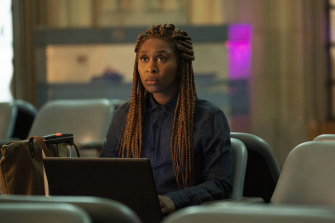 Cynthia Erivo as paranormal investigator Holly in The Outsider.Credit:Fox Showcase

Making it work on-screen, though, required some significant alterations. "If you hem too close to the book, it's not even an adaptation. What's the point? So you have to find that sweet spot between honoring fans of the book and also doing something fresh and new for people who have no idea what the book is," Widmyer said.

"I think what makes some adaptations not work is when people take things at face value and say 'It's just supposed to be scary, so let's make a movie about that scary thing,' " Kolsch said. "And they lose some of the heart and the characters."

Sometimes, the challenges are a bit more practical. King's books tend to be behemoths. It clocks in at more than 1000 pages and covers a long timespan. As Muschietti said, "You have to tell the story in a way where every single event provokes a new event and then the consequences of that propulse you to a new scene. In the book, the narrative is much looser." 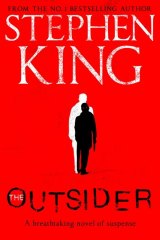 That both means rewriting the timeline to some degree and choosing an area of focus – in this case, "the big emotional journey for the characters." More than the terror, it was the sweet childhood romance at the heart of It that struck Muschietti, who called the book a "love letter to childhood." King "values childhood as something that doesn't happen again, and there is an intensity in the way you feel [in first relationships and friendships]," he said.

Screenwriter Gary Dauberman's first step in working on the screenplays for the It movies was to go through the book and ask, "What can we get away with not having?" and to pare everything down to what affected the core group of characters and the primary plotline. So he wrote a longer screenplay, then rewrote and rewrote, whittling it down each time, remembering that the most vital aspect is remaining true to the spirit of King's work.

That's also true for filmmakers who face the opposite problem. King's also a prolific short story writer, and some of the most famous screen adaptations of his work, such as Stand By Me, Hearts in Atlantis, The Shawshank Redemption and The Green Mile, all began as short fiction. Scott Beck and Bryan Woods, who co-wrote A Quiet Place with John Krasinski, are facing that issue now as they adapt The Boogeyman into a feature film.

"[We] would be much more intimidated trying to adapt something like The Stand, taking a thousand pages and figuring out how to translate that to film versus writing off the spirit of King himself and the universe he's created," Beck said. "On one hand, it's intimidating because you want to make sure it remains a homage to the intricacies he puts into his work, but on the other hand, it's exciting because it's a launching pad. . . . You can expand this [short story] by making it a brief scene in the movie and building everything from that."

Which adaptations work for you probably depend on your own personal relationship to King's work. Luckily, there are an awful lot to choose from. With the success of films like It and Pet Sematary and TV shows like The Outsider, there will no doubt be more.

Tags: from, It, J, Outsider, the, to
You may also like
Celebrities News