Jet turbine-powered flying motorcycle which can travel 300 mph and has a price tag of $380,000 completes first flight testing

The makers of a luxury vehicle billed as a ‘flying motorcycle’ that can travel upwards of 300mph have completed flight testing their first prototype and are ready to take preorders.

Jetpack Aviation envisions its Speeder—a jet-powered, vertical takeoff and landing (VTOL) aircraft—as both a pleasure craft and a mission vehicle well-suited for medical teams and fire and rescue operations.

The company’s P1 prototype has an aluminum chassis and was tethered during recent flight testing in Southern California, where it hit several benchmarks that ‘demonstrated the Speeder’s ability to take-off, climb, hover, yaw and perform slow transitions into forward flight,’ Aerospace Testing International reported.

The Speeder can reach an altitude of up to 15,000 feet and will ultimately be capable of producing a maximum thrust of 1,200 pounds.

With cargo on board, an automated Speeder could hit speeds of 300 mph, though a manned version would be slower so the pilot could safely see and breathe.

The cost of the Speeder was initially reported at $380,000, but that’s likely to increase, according to Jetpack Aviation CEO David Mayman. 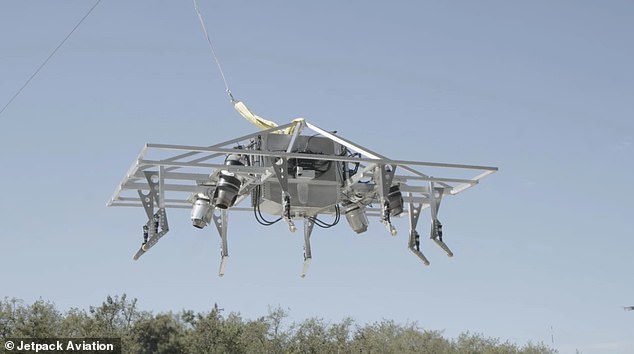 Jetpack Aviation cleared the first testing hurtle for the P1 prototype of its Speeder, a jet-powered, vertical takeoff and landing (VTOL) aircraft than will be able to go 300mph

The Speeder is small enough to be transported in a trailer and doesn’t need charging before taking off.

And unlike a jetpack, there’s not a lot of prep work needed to launch: ‘You’d just hop on and fly,’ New Atlas reported.

JA is already working on its next iteration, the P1.5, which will use a smaller frame with carbon-fiber body panels.

It will look closer to the final production model and will fly without a tether. 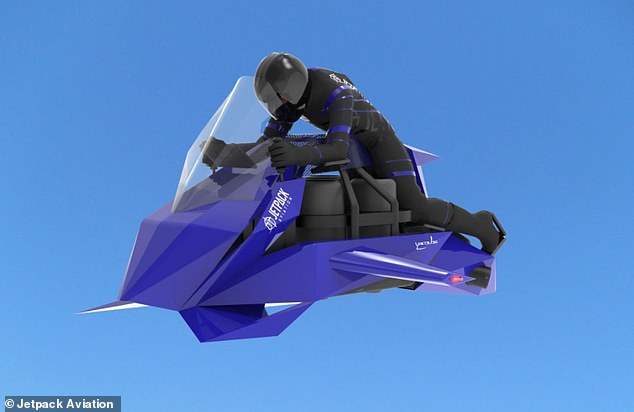 Like Jetpack Aviation’s JB-10 and JB-11 jetpacks, the ‘flying motorcycle’ is powered by mini-turbojet engines. But it will move faster, support up to two passengers and carry heavier loads

The next experimental model, the P2, will have a fully-formed body and small removable wings.

While Speeder prototypes use four engines, the final production model will have up to eight.

Right now the Speeder can be powered by jet fuel, diesel or kerosene, but Mayman is committed to adopting zero-net carbon fuel moving forward.

The company has already nabbed attention with its JB-10 and JB-11 jetpacks, among the only ones on Earth powered by min-turbojet engines.

The Speeder operates on a similar principle, but will move faster, carry heavier loads, and support up to two passengers. 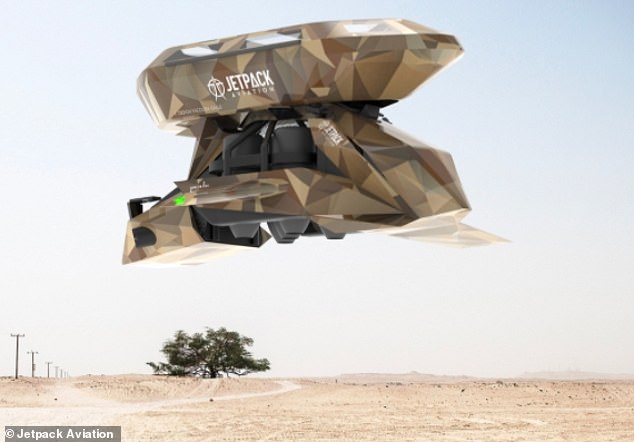 While the Speeder will be available for commercial sale, CEO David Mayman sees it has having a lot of potential with the military, medical teams and fire and rescue operations

It will also be electronically self-stabilized, according to New Atlas, with servo-controlled nozzles ‘that can quickly vector the thrust from each jet in 360 degrees to make lightning-quick balance corrections and execute maneuvers.’

The tether used in trials isn’t holding the vehicle up, Mayman insists, it’s just making sure it doesn’t suddenly drop or fly off course.

‘Right now we’ve verified it can take off, climb, do turns. It can hold itself in a stable hover using LiDAR. Nice and accurate,’ he told NS. ‘It does slowly drift a bit at the moment, maybe a foot over five minutes, but you can give it a decent shove with a pole and it’ll wobble and then come right back to where it was.’ 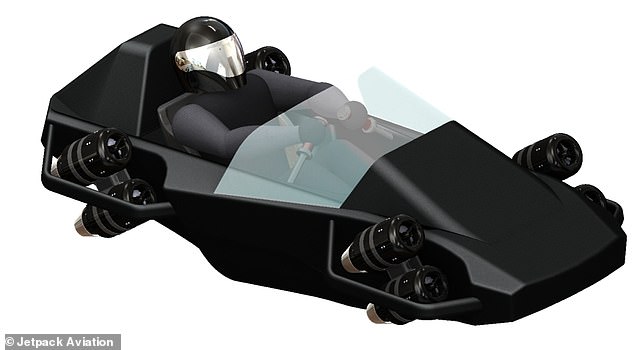 Mayman says his goal is to make the Speeder modular, with different types of frames and propulsion setups to serve the different customers. Pictured: An eight-engine ‘go-kart’ configuration for the Speeder

Mayman says his goal is to make the Speeder modular, with different types of frames and propulsion setups to serve the different needs of customers.

‘Sometimes, you’ll just want to fly the chassis, so it’s got to be modular and field-adaptable. For really long-range work, it’s possible to use a wet wing with a bladder full of additional fuel in it.’

Tags: can, Flying, motorcycle, Rea, that
You may also like
Celebrities News