Indigenous Australians would gain the right to establish local and regional advisory bodies under new federal law by early next year in the first step towards a creating a national “Voice” with the power to advise Federal Parliament on policies which affect Aboriginal and Torres Strait Islander people.

The federal government will on Friday unveil its proposal to create three levels of advisory bodies after two years of consultation with Indigenous leaders as a response to the demands from the 2017 Uluru Statement of the Heart. 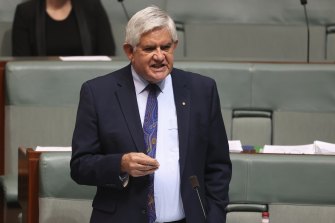 Indigenous Australians Minister Ken Wyatt will announce the model for the “Voice” to Parliament on Friday.Credit:Alex Ellinghausen

The process will begin by establishing regional bodies in consultation with local and state governments with an aim to appoint interim bodies by July 1 next year, as long as legislation is passed in the first half of 2022.

A report emphasises the urgency of the task, warning that many communities are living in poverty and need people to speak up on their behalf, but the timetable is uncertain because there are likely to be only a few parliamentary sitting weeks before the next election, due by May.

Report authors Marcia Langton and Tom Calma, both prominent academics, said the proposal could be the most significant reform in Aboriginal and Torres Strait Islander affairs for generations.

“We heard in chorus – from our own people, along with non-Indigenous Australians – how much it would mean for Aboriginal and Torres Strait peoples to have our voices heard. The importance of what we propose cannot be understated,” they wrote.

After regional bodies were established, the federal government would be obliged to ask a 24-member national “Voice” for advice on proposed laws and policies that overwhelmingly affect Aboriginal and Torres Strait Islander peoples.

The report recommended a National Voice would also advise on matters of national significance to Aboriginal and Torres Strait Islander peoples relating to their social, spiritual and economic wellbeing.

“The relationship between the Australian Parliament and government and the National Voice would be a two-way interaction, with each able to initiate advice or commence discussion around relevant policy matters,” the report said.

“Engagement with the National Voice would ideally occur early in the development of relevant laws and policies to allow for a partnership approach.

“There would also be an ‘expectation’ to consult the National Voice, based on a set of principles, on a wider group of policies and laws that significantly affect Aboriginal and Torres Strait Islander peoples.”

Indigenous Australians Minister Ken Wyatt told this masthead it was important to get the system right.

He said for the Indigenous Voice to work, it must have a strong foundation from the ground up.

“That’s why we’re taking the next step and starting with the local and regional Voice – as per the process set out in the report,” he said.

“The local and regional Voice will contribute to achieving the Closing the Gap outcomes by providing avenues for Indigenous voices to be heard, including to provide feedback to government on Closing the Gap.”

The Coalition has faced criticism for ruling out enshrining an Indigenous “Voice” to government in the constitution, despite it being called for in the 2017 Statement from the Heart endorsed at a four-day First Nations National Constitutional Convention held at Uluru.

But the report authors said there was strong feedback that an Indigenous Voice must be “secure and enduring” and “appropriately protected”.

“While consideration of legal form was outside our co-design responsibility, we were not surprised by the growing support for constitutional enshrinement that was particularly evident in submissions,” it said.

“We heard many practical and principled reasons supporting the enshrinement of an Indigenous Voice in the Australian Constitution, including that it would be the best way to protect an Indigenous Voice against abolition, enhance its effectiveness and recognise the unique place of Aboriginal and Torres Strait Islander peoples in our nation.”