During the past fortnight, the Tokyo Olympics have transformed even the most reluctant viewers into fist-pumping, stat-quoting, scream-till-your-voice-is-hoarse super fans.

Two weeks ago Ariarne Titmus was just another swimmer; now you’d be hard-pressed to find someone who can’t name her entire extended family. Such is the power of the Olympics; they managed to distract Australians at a time when much of the country is yo-yo-ing in and out of lockdown.

This makes it all the more terrifying that while the Olympics have reached the finish line, those of us stuck inside are still plodding along, unsure how long we have left to run (or if it’s a race at all?). Thankfully, the Paralympics aren’t far off (August 24), but until then, you’re going to need something to fill the Olympic-sized hole in your life. Luckily, we’ve got you covered.

Few industries understand the power of pre-determined narratives better than professional sports. Athletes are managed, backstories are crafted and the finished product is fed to the fans. Netflix’s new five-part documentary series Untold seeks to remove the careful stage managing and spotlight the messy side of sporting success.

Each episode offers a fresh perspective on a well-known athlete or sporting event. Episode one, Malice at the Palace, explores the most famous brawl in NBA history, led by Indiana Pacers player Ron Artest. Delving beyond the highlight reel, the episode uncovers Artest’s long battle with depression and charts the events that led to the fight.

Perhaps most relevant is episode three, which begins with grainy homemade footage of a young Caitlyn Jenner (then Bruce) training for the 1967 Olympics. Jenner would win Gold – shattering the world record – all the while feeling like someone else. Since then, Jenner has become a cog in the Kardashian-reality TV machine but Untold paints her story in a new light. 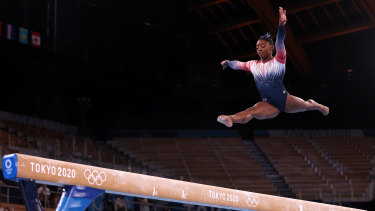 Simone Biles had a challenging time in Tokyo.Credit:Getty Images

Having debuted shortly before the Olympics, Simone vs Herself makes for curious viewing in the aftermath of Simon Biles’ experience at the Tokyo Games. Arguably the greatest artistic gymnast of all time, the 24-year-old withdrew from the team final and individual all-around gymnastics events in Tokyo, citing mental health issues, triggering a flood of empathy and criticism worldwide.

The first episode titled What Can’t I Do, offers a glimpse into the world of Biles while also charting her preparation for the Yurchenko Double Pike on vault: a skill so tricky that no woman has completed it before.

As if running a marathon isn’t impressive enough, how about completing it in under two hours? In running circles, the “sub two” marathon is the stuff of legend, never been done before but within the realm of possibility. Caught the athletics bug during Tokyo? This documentary will scratch that itch, with Breaking2 bringing together the best marathon runners on the planet – including Tokyo Gold medallist Kenya’s Eliud Kipchoge – and setting them the sub-two challenge.

My name is Ada Hederberg, Stan

The Matildas captured the hearts of a nation with their valiant fourth-place finish at Tokyo, and with football fever proving infectious, now is the time to dive into this gripping Stan documentary, My Name is Ada Hederberg. Hederberg is Sam Kerr before Sam Kerr came along. The Norwegian national is widely considered the greatest female footballer ever, having won the first-ever female Ballon D’or trophy for the world’s best player in 2018. (Stan is owned by Nine, owner of this masthead.) 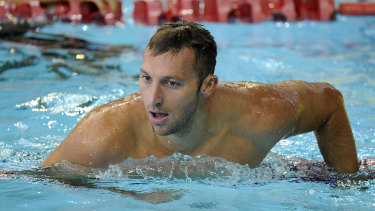 Australia’s Ian Thorpe takes a rest after finishing sixth in a heat in 2011.Credit:AP photo

Having cut such an impressive figure during Channel Seven’s broadcast of the Tokyo Olympics, Ian Thorpe is front of mind. While there is no shortage of documentaries examining his career, none provides as much insight as the 2012 film, The Swimmer.

Directed by filmmaker Gregor Jordan – a friend of Thorpe’s – The Swimmer follows Thorpe’s return from retirement in an attempt to make the London 2012 Olympic Games. Ultimately, he was unsuccessful but that is what makes The Swimmer such gripping viewing. Seeing Thorpe far from his best, looking to capture the form that made him untouchable mirrors the same rush you get from watching the Games in real time: the nerves, the cheers, the sinking feeling of so close, yet so far.

Dark Side of the Ring, SBS On Demand

One of the most captivating elements of the Tokyo Olympics was being introduced to a sport you previously knew nothing about and falling in love with it, flaws and all (see: me with Speed Climbing at Tokyo).

Tags: extra, fill, how, the, Time, to, TV
You may also like
Celebrities News