Ellen White came off the bench to score a late winner as England beat Japan in their second SheBelieves Cup match in New Jersey.

White coolly slotted the ball past the keeper from close range after Toni Duggan, who was also a second-half substitute, won possession on the edge of the box.

It keeps alive England’s slim hopes of defending their SheBelieves Cup title, after they lost to world champions the USA in their opening match on Thursday.

Bethany England and Lauren Hemp were denied by Japan keeper Sakiko Ikeda in the first half as England played better that they did when losing in Orlando but still lacked the sharpness they showed in last year’s competition.

Japan had chances in the first half too – Mina Tanaka was able to get in behind the defence on two occasions but failed to capitalise.

And England keeper Ellie Roebuck had to scramble to get across to Hina Sugita’s long-range effort, which hit the post.

The Lionesses take on Spain in their final match of the round-robin event in Frisco, Texas, on Wednesday (21:15 GMT). 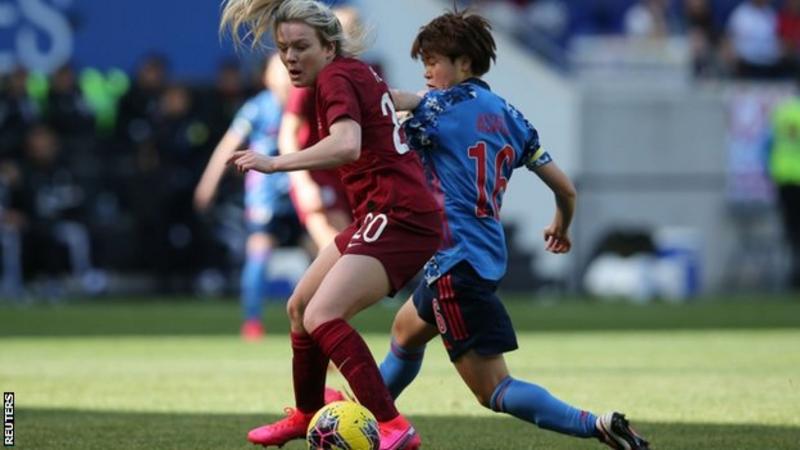 Neville, whose squad has an average age of 21, opted for a front three of 19-year-old Lauren Hemp, 22-year-old Chloe Kelly and 25-year-old Bethany England – who went into Sunday’s game with 12 caps between them.

They showed confidence on the ball and fluidity on the whole but could not take the chances which they created between themselves.

Hemp, making a second successive start after impressing against the USA on Thursday, had the best chance of the game within the opening five minutes.

She was played in by England and got there ahead of the defender but couldn’t disguise the direction of her shot when one-on-one with the keeper.

England was then gifted a great opportunity after a neat pass from Kelly on the right but the Chelsea striker – joint-top scorer in the Women’s Super League this season – struck it straight at Ikeda, who had a busy half in goal for Japan.

Moments later, England’s driving run created space for Jordan Nobbs to put in a cross from the right and Hemp, under pressure from the full-back, couldn’t quite get on the end of it.

England came close again with a powerful shot from the right that Georgia Stanway, following up on the rebound, could only fire over the bar from the edge of the box. And a diving header from England in the second half was straight at the keeper.

Neville said before the tournament he wanted the young players to go out there “with no fear” and ultimately they did that – dribbling at defenders, taking on players and switching positions across the front three. But they just lacked the clinical edge that World Cup top scorer White was able to provide when it mattered.

Experience takes England over the line 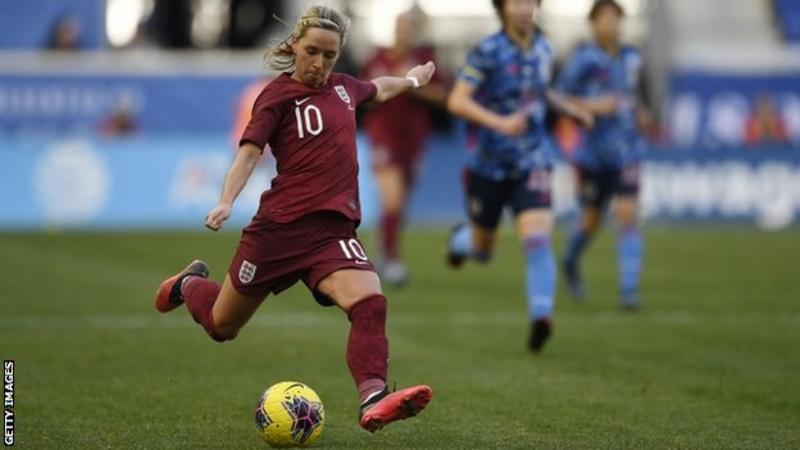 There have been calls for Neville to give opportunities to the youth and he did that, but ultimately it was the tried and tested which got England over the line.

Duggan, who has struggled with niggling injuries since the World Cup, came on and made an impact – winning the ball back for the goal and curling in the perfect cross for White to slide home.

Striker England said: “I was disappointed in myself to not put away the chances. I would usually back myself but thankfully Ellen does what Ellen does best – and put the ball in the net to get the win.”

The experienced players provided that clinical edge England missed in the first half and Arsenal midfielder Jordan Nobbs described Duggan’s performance as a substitute as “amazing”.

“We could have had a few more goals in the first half,” Nobbs told BBC Sport. “Our front three and our subs coming on were phenomenal. We have a very exciting forward line.

“When [Duggan] came on she made a big difference. That’s what we need – players who do a job on the pitch and players who can come on and win us the game.”

Attempt saved. Emi Nakajima (Japan) left footed shot from outside the box is saved in the centre of the goal. Assisted by Yuka Momiki.

Riko Ueki (Japan) wins a free kick in the defensive half.

Attempt missed. Nikita Parris (England) right footed shot from outside the box misses to the left.

Toni Duggan (England) wins a free kick in the attacking half.

Riko Ueki (Japan) wins a free kick in the defensive half.

Attempt missed. Jordan Nobbs (England) right footed shot from outside the box is too high following a set piece situation.

Attempt saved. Riko Ueki (Japan) right footed shot from outside the box is saved in the bottom right corner. Assisted by Yuka Momiki.

Attempt missed. Riko Ueki (Japan) left footed shot from the left side of the box is close, but misses to the left. Assisted by Narumi Miura with a headed pass.

Hina Sugita (Japan) wins a free kick in the defensive half.

Mina Tanaka (Japan) wins a free kick in the attacking half.

Hina Sugita (Japan) is shown the yellow card for a bad foul.

Chloe Kelly (England) is shown the yellow card for a bad foul.