Employers fear asking workers if they have a disability, making data collection on employment rates tricky as companies work to boost their diversity credentials, a royal commission has heard.

“There is a bit of anxiety about asking people,” Business Council of Australia chief executive Jennifer Westacott told the Royal Commission into Violence, Abuse, Neglect and Exploitation of People with Disability on Tuesday. 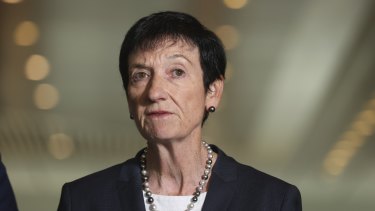 People with disabilities make up just 1 per cent of the workforce of the nation’s 10 largest employers, the royal commission heard, but ABS data suggested this was under-reported with the actual rate potentially as high as 9 per cent nationally.

“We need to get better,” Ms Westacott said.

She said small-to-medium business owners were particularly nervous and would “steer away from employing people with a disability” if they did not have enough support.

“They don’t want to be in breach of any provision,” she said.

There was also “the whole issue about people’s willingness to disclose”, she said, making disability employment rates “a complex area”.

The hearing was told only 54 per cent of member companies surveyed by the BCA had some method of recording the disability status of job applicants and employees.

Ms Westacott said a “common definition” of which conditions should be categorised as disabilities would help companies collect more accurate data.

Counsel assisting Kate Eastman SC said the royal commission had heard there was “equally a great fear for people with disability to disclose they have disability.”

“A number of the observations made over the last day or so is the importance of creating safe workplaces for disclosure,” she said.

Ms Westacott said cultural change was needed “across the community” to get more people with disabilities into employment.

“This is a story about Australia’s economic performance,” she said. “This is vital to the performance of companies.”

Ms Eastman quizzed Kmart chief people and capability officer Tristram Gray about a company HR manual provided to store managers responsible for hiring, which warned of “legal actions that can arise from managing people with a disability”, including anti-discrimination lawsuits.

“Why are you telling your managers that?” Ms Eastman asked.

Mr Gray said the company was simply reminding managers “of their responsibilities and the risks of not performing those responsibilities in a professional and compliant manner with the laws in the country”.

Kmart employs 42,364 people including 671 workers who identify as having a disability, with 27 paid under the Supported Wages Scheme.

The retailer has received six discrimination complaints in the past two financial years, Mr Gray said in a written submission, including its first disability employment complaints, which alleged “being denied accessibility to employment as part of the recruitment process”.

“These complaints largely related to the inability to provide or properly manage workplace adjustments and also allegations of discrimination and bullying,” the submission said.

“All complaints were investigated and resolved.”