Eminem’s new music video for ‘Higher’ packed a lot of punches — and not just because it aired during the ‘UFC 257 Countdown.’ The video itself is a direct reflection of how Eminem, as a rapper, is essentially an ‘athlete.’

Eminem‘s new music video for “Higher” shows how much athletes and musicians really have in common. So, it was only appropriate that it debuted on ESPN’s UFC 257 Countdown on Jan. 23, leading up to the big fight between Dustin Poirier and Conor McGregor. While Eminem may not be strapping on boxing gloves himself, the new music video did put Eminem in his own metaphorical ring — against himself. 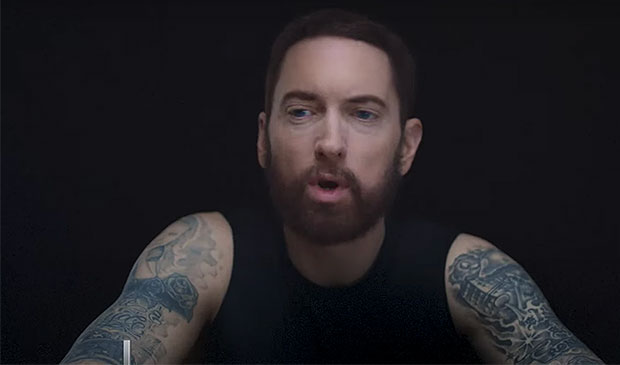 As Eminem raps about the peak of his career, and the journey it took to get there that started when he was only five years old, the rapper trains intensively for a match. This sports imagery was intentional, meant to illustrate the “allusions between the way a musician creates and prepares to perform and how an athlete trains and prepares for competition,” according to ESPN‘s press release for the video.

“Where am I supposed to go from here?/Really I have no idea/All I know is every time I think I hit my ceiling/I go higher than I’ve ever f***** been,” he defiantly says in the black-and-white video. The Detroit native then took a swing at his “haters” in verse two, something he’s no stranger to. “Got no time for no haters in this b****/Or toleration for this shit/But like medication, my dedication/And the time it takes to do this s***,” he says.

And while Eminem’s not literally boxing anyone — well, except with the emcee‘s words — the video is meant to also illustrate Eminem’s battle “against is own demons,” the press release added. A music video debuting on UFC calls for famous figures in the world of sports, and so UFC President Dana White and ESPN anchor Michael Eaves made cameos! “If we learned anything from 8 Mile, it’s what when it comes to battle rapping — don’t for Eminem,” Eaves said in a faux Sports Center interview. “He treats his rap game with a 24 hour tenacity that only the elite can channel,” he also said in the interview intro.

After Dana expressed he was a “fan” but said said that Eminem could not “prepare” for his upcoming battle, predicting a failure — Em quickly clapped back. “People like you give people like me the fuel they need to succeed. The best part about your opinion is it doesn’t matter,” Eminem said before the music video resumed.

As for what led Eminem to work with UFC, David Nieman — VP of Sports and Gaming for Interscope Geffen A&M — said, “We have always been interested in fostering the synergy between music and sports and along with ESPN we have created many great moments together.” He then added, per ESPN‘s press release, “Working together to amplify Eminem’s artistic vision in such a unique way for this highly anticipated UFC event is absolutely a high point.”

“Higher” is a track off Eminem’s new album, Music To Be Murdered By – Side B, which dropped in Dec. 2020. He infamously dissed Snoop Dogg on the track “Zeus,” in response to the legendary rapper’s comments in an interview on The Breakfast Club. He also offered “wholehearted apologies” to Rihanna after he referenced Chris Brown‘s 2009 assault against the Fenty founder in his leaked song “Things Get Worse.”