Emily Ratajkowski is accusing Robin Thicke of grabbing her bare breasts on the set of the video for his massive hit Blurred Lines.

The 30-year-old supermodel was one of three models to appear in the Diane Martel-directed video, alongside Thicke, T.I. and Pharrell Williams.

Two versions of the video were released in March 2013. A highly controversial, unrated version was banned from YouTube in just under a week for violating the site’s terms of service. 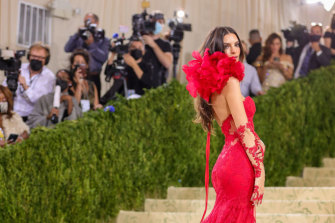 Ratajkowski, a new mum who recently introduced her 6-month-old son to the world in an Instagram Story, is making the allegations against the R&B superstar in her upcoming book My Body, which is scheduled to be published next month.

In a graphic excerpt, first reported by UK’s The Sunday Times, Ratajkowski described an initial enjoyable atmosphere on the set in a Los Angeles studio, where she was surrounded by an all-female team.

That all changed when she found herself alone with Thicke, whom she described as being “a little drunk.” 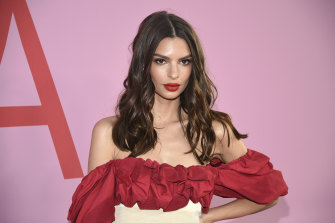 Emily Ratajkowski on the red carpet in 2019.Credit:AP

He also “didn’t seem to be enjoying himself in the same way,” she wrote.

“Suddenly, out of nowhere, I felt the coolness and foreignness of a stranger’s hands cupping my bare breasts from behind. I instinctively moved away, looking back at Robin Thicke,” Ratajkowski added.

“He smiled a goofy grin and stumbled backward, his eyes concealed behind his sunglasses. My head turned to the darkness beyond the set. (The director, Diane Martel’s) voice cracked as she yelled out to me, ‘Are you OK?’”

The experience made her feel “naked for the first time that day” but she had been “desperate to minimise” what had happened.

“I pushed my chin forward and shrugged, avoiding eye contact, feeling the heat of humiliation pump through my body,” she said. “I didn’t react — not really, not like I should have.”

The video and the song received a good deal of criticism at the time, slammed by many for its sexist and misogynistic message, with some people suggesting that it promoted rape culture.

Martel intended to subvert the song message, by portraying nearly naked women who were mocking the men. But according to Ratajkowski, Thicke ended up undermining the director’s intentions.

“With that one gesture, Robin Thicke had reminded everyone on set that we women weren’t actually in charge. I didn’t have any real power as the naked girl dancing around in his music video. I was nothing more than the hired mannequin,” she wrote.

The director said that she recalls the episode, as well as her angry reaction.

“I remember the moment that he grabbed her breasts. One in each hand. He was standing behind her as they were both in profile,” Martel said.

“I screamed in my very aggressive Brooklyn voice, ‘What the f–k are you doing, that’s it!! The shoot is over!!’”

Thicke “sheepishly apologised” after the incident.

“As if he knew it was wrong without understanding how it might have felt for Emily,” Martel added.