That was an easy labour! Moment female elephant calf drops on to the soft sand after a 20-minute birth at Chester Zoo and is up suckling and exploring within minutes

Elephant experts at the zoo – who monitored the birth remotely – say both mum and calf are doing ‘ever so well.’

The new calf was welcomed by the rest of the family herd, including one-year-old half-brother Anjan, who experienced a birth for the first time, and three-year-old sister, Indali. 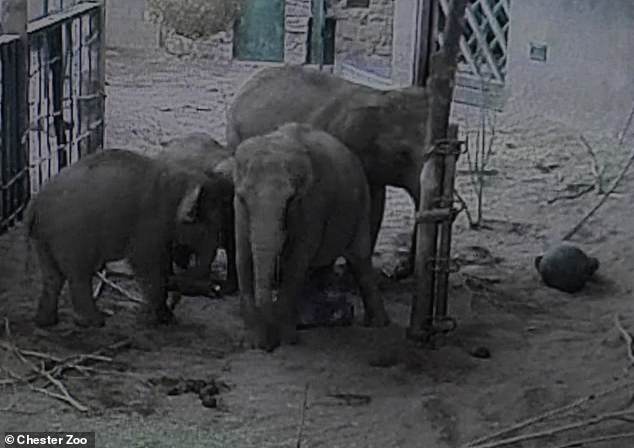 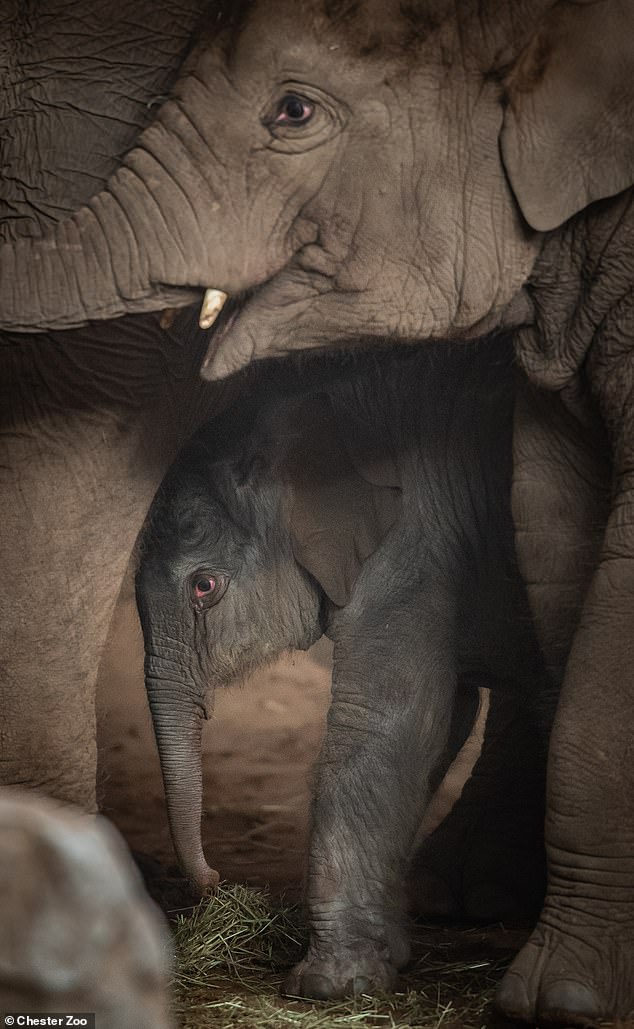 Katie Morrison, Assistant team Manager of Elephants at the zoo, described the ‘wonderful’ birth as a ‘great learning experience for the family herd.’

She commented: ‘A birth is a wonderful, positive social event for the elephants and is always a great learning experience for the family herd, particularly the younger members.’

‘The excitement levels really build when a calf is due and, as soon as Sundara went into labour, it was obvious to the other herd members that something special was about to take place.

‘Sundara delivered her calf onto deep, soft sand following a labour lasting around 20 minutes, with the other elephants gathered around her.’ 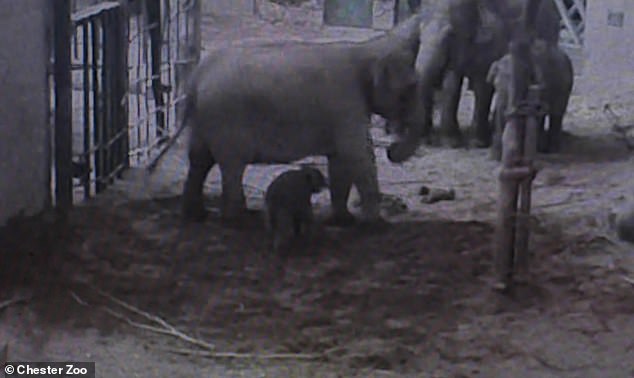 The calf’s arrival brought an end to a 657-day pregnancy for mum, Sundara, who delivered her calf onto soft sand following a 20-minute labour – and showed the calf up on her feet and suckling within minutes 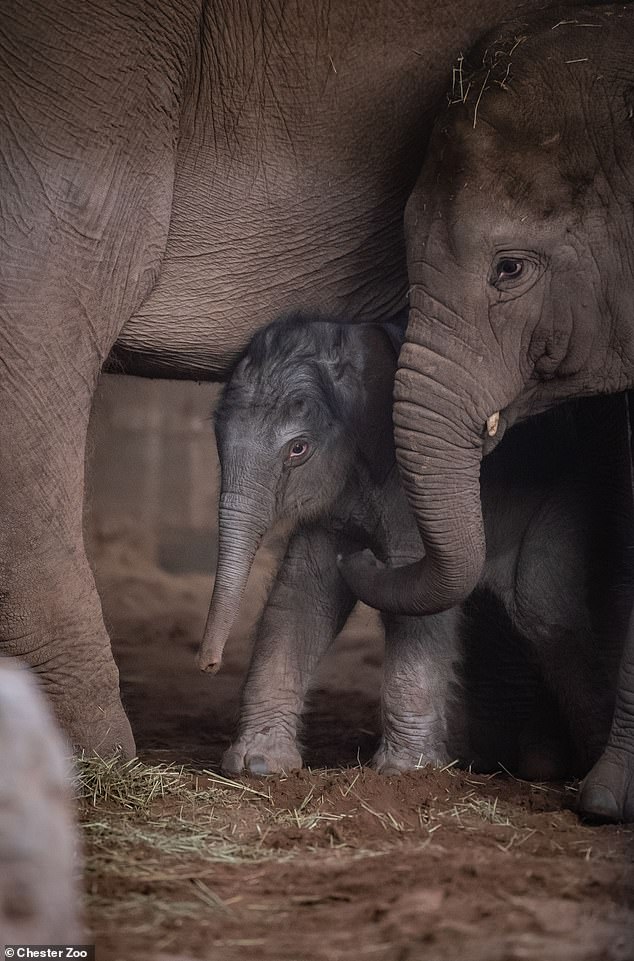 A spokesperson at the zoo told how the mother immediately began to stimulate the calf with a number of gentle kicks to encourage her up off the ground as quickly as possible. Pictured together

‘She then immediately began to stimulate her with a number of gentle kicks to encourage her up off the ground as quickly as possible, and she was on her feet and suckling within minutes, which was wonderful to see. So far both mum and calf are doing ever so well indeed.’

Asian elephants are listed as endangered by the International Union for the Conservation of Nature (IUCN).

The species is highly threatened in the wild by habitat loss, poaching, human-wildlife conflict and a deadly herpes virus called Elephant Endotheliotropic Herpesvirus (EEHV), which has so far been found present in nine countries across its range.

Conservationists from Chester Zoo have, for many years, been working to combat these threats, utilising the skills and knowledge developed working with the family herd in Chester.

· Chester Zoo is home to seven Asian elephants – Thi, Sundara, Indali, Anjan and the new arrival (all members of the Hi Way family), as well as male Aung Bo (dad to the latest calf) and female Maya

· Asian elephants are native to South and South East Asia

· Chester Zoo is part of a breeding programme coordinated by the European Association of Zoos and Aquariums (EAZA) that is focused on sustaining the elephant population in Europe. The new calf’s arrival is another huge boost to these efforts

· The Asian elephant is threatened by habitat loss due to logging, agricultural and urban development; poaching for ivory, disease and conflict with humans. As their natural habitat is lost, more animals are wandering into farmed areas causing crop damage. Increasing numbers of people have also died as a result of elephant encounters, leading to retaliatory hunting by some communities

· Chester Zoo conservationists have been operating in India for almost 15 years, preventing extinction in the wild by utilising the skills and knowledge developed working with the herd in Chester. A major Chester Zoo project in Assam, northern India, has successfully eliminated conflict between local communities and the nearby Asian elephant population, offering a blueprint for the future conservation of the species.

· Scientists at Chester Zoo are also leading the global fight to find a cure for a deadly disease which is threatening Asian elephants globally, in zoos and the wild. There is currently no cure for Elephant Endotheliotropic Herpesvirus, also known as EEHV, but Chester Zoo researchers are leading the fight to produce a vaccine

Mike Jordan, Director of Animal and Plant Collections at the zoo, added: ‘Magnificent Asian elephants are under threat globally. The international conservation community is working tirelessly to secure their future and prevent their extinction.

‘Two particular areas that are a main focus for the zoo include human-wildlife conflict in Assam, India where our conservationists have worked for more than 14 years to prevent deaths of elephants and people living alongside them by finding harmonious solutions that allow them to co-exist side by side.

Meanwhile the zoo is leading the global effort in the search for a viable vaccine that can help rid elephants of the terrible disease, EEHV.

Scientists, researchers and conservationists have made huge progress and are hopeful that Asian elephants will soon have one less threat pushing them towards extinction.’

Chester Zoo is part of a breeding programme coordinated by the European Association of Zoos and Aquariums (EAZA) that is focused on sustaining the elephant population in Europe.

The zoo’s elephant house is open as normal. 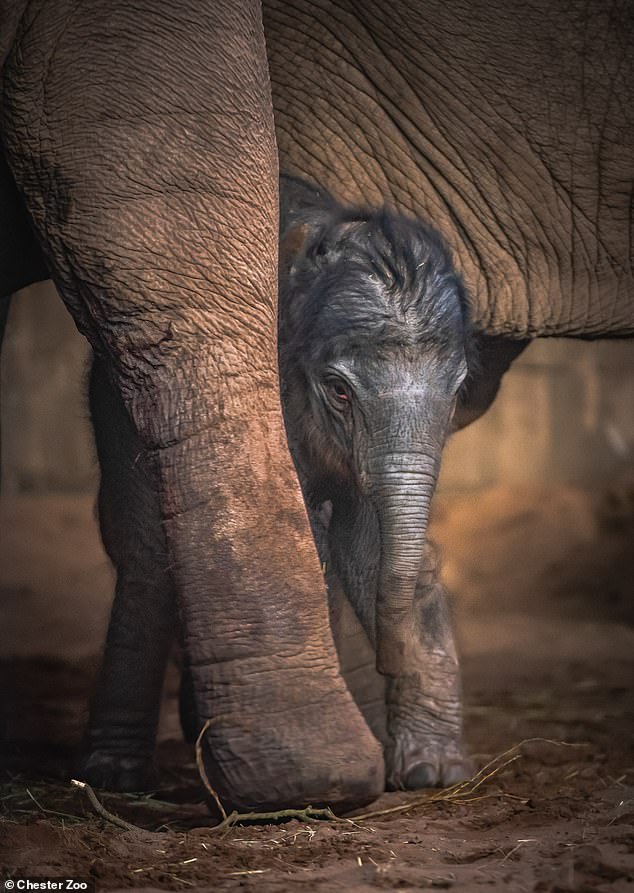 The new, female calf was born at 17:10 on Wednesday 27 February after a gestation of 657 days. Pictured, with her mother, Sundara

Tags: af, calf, drops, Elephant, on, sand
You may also like
Celebrities News