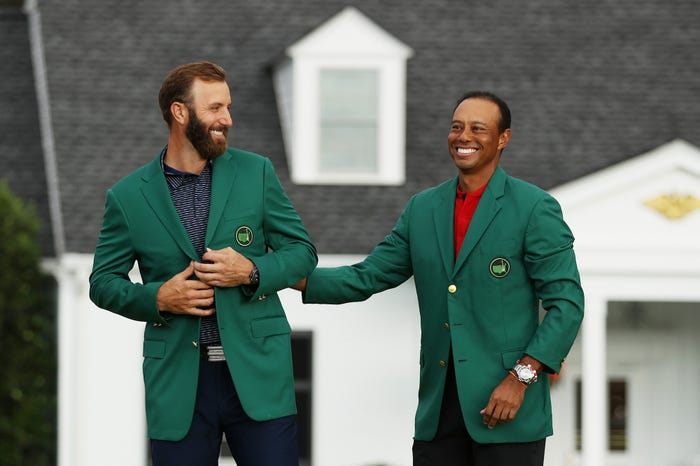 Tiger Woods might have conceded his Masters crown to Dustin Johnson on Sunday, but that doesn't mean he wasn't happy to see his countryman seal his first ever victory at Augusta.

According to ESPN, Woods, who finished the tournament in 38th place, welled up during Johnson's emotional victory speech, just moments after he'd handed the 36-year-old his green jacket.

"This is just a dream come true, as a kid, I always dreamed about being a Masters champion," Johnson, also teary eyed, said. "It's hard to talk. It's just incredible, as you can tell. Sorry.

"I've never had this much trouble trying to gather myself. On the golf course, I'm pretty good, but out here I'm not. I have a great team who, Jesus, I can't even talk!"

ESPN's Bob Harig wrote that while Woods was pictured smiling during the presentation, off camera he became almost as emotional as Johnson.

Here's an extract from a piece published by Harig Sunday evening:

Tiger wasn't the only person moved by Johnson's emotional outpour — so to was former One Direction star and golf enthusiast Niall Horan.

"Well that was great to watch," the Irishman tweeted. "We have seen him play solid over the years but not as solid as he did the last two days. The tears and silence in the post round interview summed it all up for me."

Tags: Golf, Sports UK, The Masters
You may also like
Celebrities News