Dozens of new Dead Sea Scroll fragments bearing biblical text are discovered in Israel’s ‘Cave of Horror’ having been hidden during a Jewish revolt against Rome 1,900 years ago

Dozens of new Dead Sea Scroll fragments thought to have been hidden during a Jewish revolt against Rome 1,900 years ago have been found in a cave.

The fragments include lines of Greek text from the biblical books of Zechariah and Nahum and were radiocarbon dated to the 2nd century AD, experts confirmed.

The Israel Antiquities Authority say they were found in a remote canyon in the Judean Desert, south of Jerusalem – the first find of its kind in 60 years.

A number of items were found in the cave, including a 10,000 year old woven basket, the skeleton of a girl dating back 6,000 years and the biblical fragments.

They were discovered in clumps and rolled up within the cave – so far 11 lines of Greek text translated from the books of Zechariah and Nahum have been revealed. 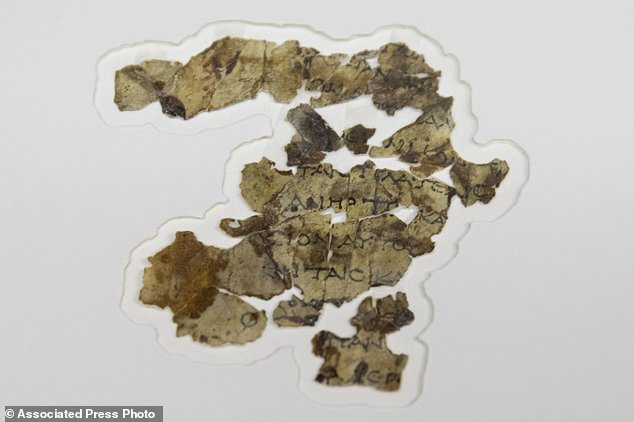 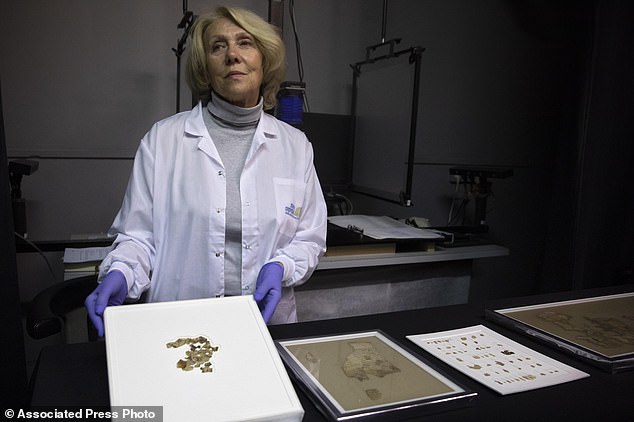 Israel Antiquities Authority conservator Tanya Bitler says they were likely hidden during a Jewish revolt against Rome nearly 1,900 years ago

Excavations of a cave in the Judea Desert in the 1950s revealed skeletons of 40 men, women and children.

It is in the southern cliff of Nahal Hever near the Cave of Letters where writings on the revolt were uncovered.

They were Jewish rebels hiding from Roman troops during the Bar Kochba Revolt from 132-136 AD.

It is thought Roman soldiers continued to besieged the camp until the inhabitants succumbed to starvation.

The new pieces are believed to belong to a larger set of parchment fragments that include a Greek rendition of the Twelve Minor Prophets.

It is thought the newly found fragments are the missing parts of those scrolls, which were first found in 1952. They include Micah’s prophecy about the End of Days.

The IAA explained that while it is written in Greek, the new scroll fragments include the name of God in ancient Hebrew letters from the First Temple Period.

The scrolls themselves come from a time before the modern ‘Old Testament’ was finalised in the form we know it today, experts explained.

The fragments were found in a site known as The Cave Of Horror, which lies in the southern cliff of Nahal Hever, near the Cave of Letters where many documents from the Bar Kochba Revolt were uncovered.

The revolt involved an armed Jewish uprising against Rome during the reign of Emperor Hadrian, between 132 and 136 AD.

The revolt was the result of religious and political tensions in Judea, linked to the establishment of a large Roman military presence in the region. 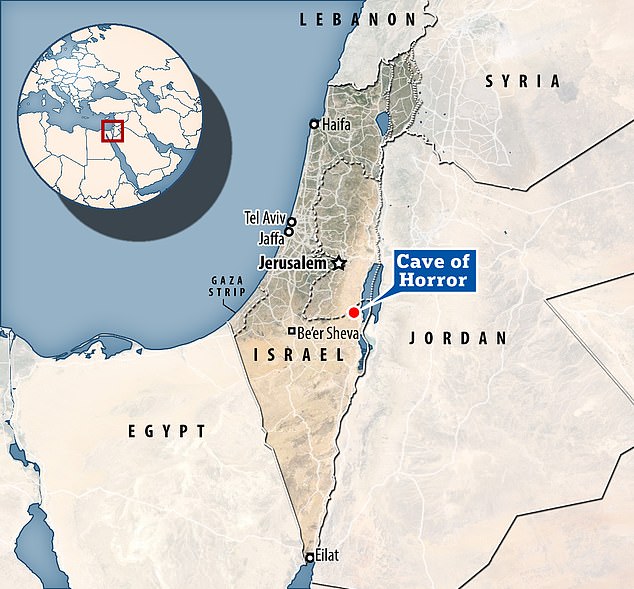 The Israel Antiquities Authority say they were found in a remote canyon in the Judean Desert, south of Jerusalem – the first find of its kind in 60 years

When the cave was excavated in the 1950s archaeologists found skeletons of 40 men, women and children who had sought refuge in the cave during the revolt.

There was also a cache of coins from the same time period, bearing the typical Jewish symbols of the time including a harp and date palm.

The remains of a Roman camp have previously been found on a cliff close to where the cave is located. Researchers believe the Romans besieged the cave until rebels inside starved to death or succumbed to thirst.

As well as the fragments, the team also found what could be the oldest surviving basket in the world, made of woven reeds. 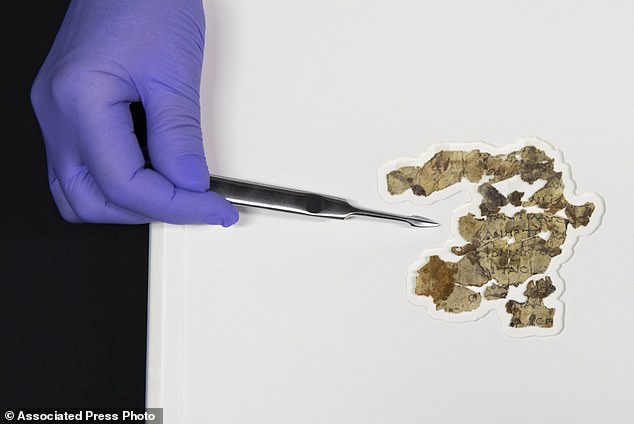 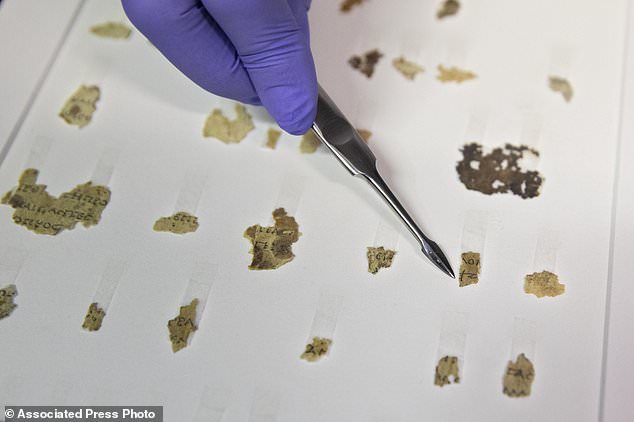 They were found in a site known as The Cave Of Horror, named for the 40 skeletons found there during excavations in the 1960s, experts explained 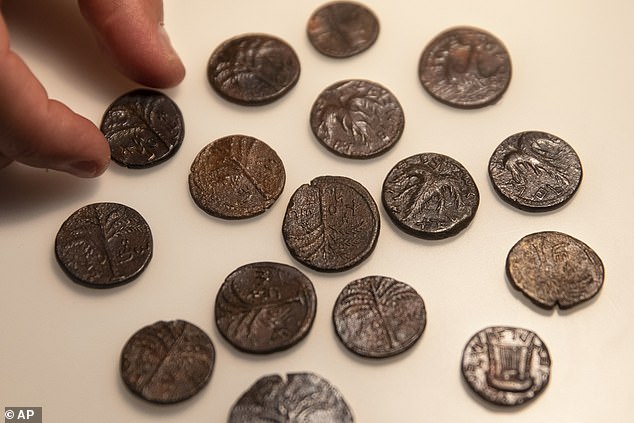 EXCERPT FROM THE BOOK OF ZECHARIAH IN THE NEW SCROLL FRAGMENTS

‘These are the things you are to do: Speak the truth to one another, render true and perfect justice in your gates.

‘And do not contrive evil against one another, and do not love perjury, because all those are things that I hate – declares the Lord.’

It has a lid and could be 10,500 years old based on radiocarbon dating. That pre-dates the arrival of pottery in the region.

‘As far as we know, this is the oldest basket in the world that has been found completely intact and its importance is therefore immense,’ said the IAA.

The archaeologists also uncovered the skeleton of a young girl dating back about 6,000 years that had been mummified and tucked into a blanket.

‘It was obvious that whoever buried the child had wrapped him up and pushed the edges of the cloth beneath him, just as a parent covers his child in a blanket. A small bundle of cloth was clutched in the child’s hands,’ said historian Ronit Lupu.

It is thought the scrolls and basket survived due to the heat and aridity in the region.

He said the work involved ‘rappelling down to caves located between heaven and earth, digging and sifting through them, enduring thick and suffocating dust, and returning with gifts of immeasurable worth for mankind.’

‘The newly discovered scroll fragments are a wake-up call to the state. Resources must be allocated for the completion of this historically important operation. 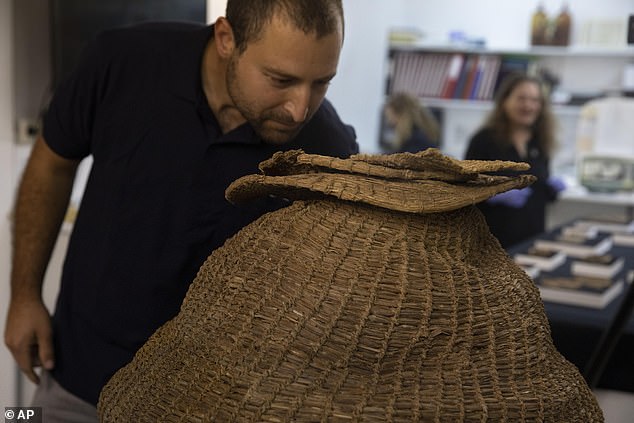 Archeologist Haim Cohen looks at a woven basket that is more than 10,000 years old 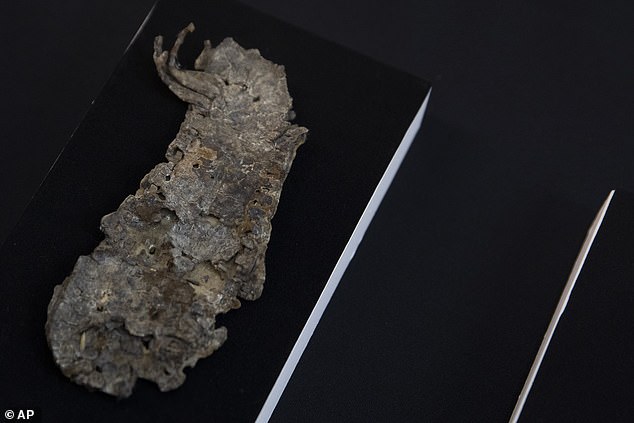 ‘We must ensure that we recover all the data that has not yet been discovered in the caves before the robbers do. Some things are beyond value,’ Hasson said.

The objects were discovered as part of a wider mission to find prehistoric and biblical relics in the region to reduce the risk of looting.

Caves and ravines are being combed by experts, as part of the project that first started in 2017.

‘For years we chased after antiquities looters. We finally decided to pre-empt the thieves and try reaching the artifacts before they were removed from the ground and the caves,’ said Amir Ganor, head of the IAA’s Theft Prevention Unit.

The Dead Sea Scrolls are a collection of Jewish texts found in desert caves in the West Bank near Qumran in the 1940s and 1950s.

They date from the 3rd century BC to the 1st century AD and include the earliest known copies of biblical text and documents.

The original scrolls were found by shepherd Muhammed Edh-Dhib as he searched for a stray among the limestone cliffs at Khirbet Qumran on the shores of the Dead Sea in what was then British Mandate Palestine – now the West Bank.

Discovered between 1946 and 1956, the Dead Sea Scrolls are a collection of 972 ancient manuscripts dating back to 2,000 years ago.

The texts include tends of thousands of parchment and papyrus fragments and in rare cases entire manuscripts.

They contain parts of what is now known as the Hebrew Bible as well as a range of extra-biblical documents.

The scrolls were found by shepherd Muhammed Edh-Dhib as he searched for a stray among the limestone cliffs at Khirbet Qumran on the shores of the Dead Sea in what was then British Mandate Palestine – now the West Bank.

The story goes that in a cave in the dark crevice of a steep rocky hillside, Muhammed hurled a stone into the dark interior and was startled to hear the sound of breaking pots. 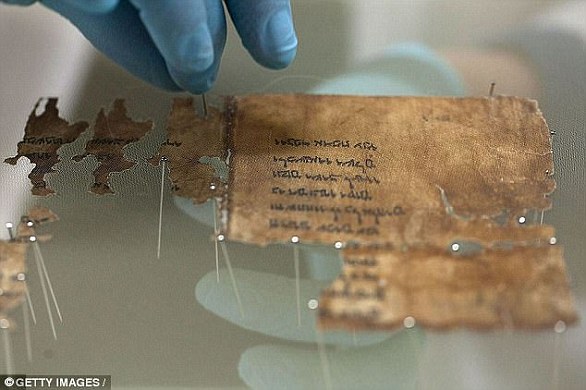 The Dead Sea Scrolls, which include tends of thousands of parchment and papyrus fragments (file photo), contain parts of what is now known as the Hebrew Bible. They also feature a range of extra-biblical documents

Venturing inside, the young Bedouin found a mysterious collection of large clay jars in which he found old scrolls, some wrapped in linen and blackened with age.

The texts have since been excavated by archaeologists, who are now racing to digitise their contents before they deteriorate beyond legibility.

The texts are of great historical and religious significance and include the earliest known surviving copies of biblical and extra-biblical documents, as well as preserving evidence of diversity in late Second Temple Judaism.

Dated to between 408BC and 318AD, they are written in Hebrew, Aramaic, Greek, and Nabataean, mostly on parchment, but with some written on papyrus and bronze.

The scrolls are traditionally divided into three groups.

‘Biblical’ manuscripts, which are copies of texts from the Hebrew Bible comprise 40 per cent of the haul. 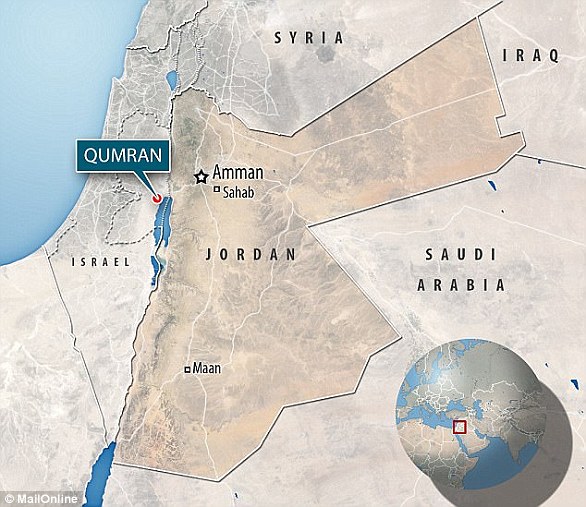 Tags: Dead, Dozens, new, of, Scroll, sea
You may also like
Celebrities News