Doug Aitken, born and based in California, is one of the most globalised of all contemporary artists. He once told an interviewer that “home can be motion” and his work sets out to prove that proposition. His projects are often conceived on a grand scale, requiring teams of collaborators. He makes video, photography, sculpture, performance, and forms of installation, usually outside the gallery environment, leaving works in deserts, jungles, even beneath the surface of the ocean.

Doug Aitken: New Era, at the Museum of Contemporary Art, is Rachel Kent’s swansong as senior curator before she takes up the role as CEO of the Bundanon Trust. It’s a surprising move, as the usual curatorial career path in Australia sees arts administrators moving in the opposite direction, treating regional jobs as stepping-stones towards a prestigious urban post. 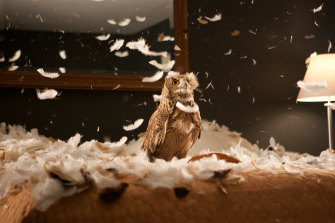 There’s a hint of Kent’s rural turn in the Aitken catalogue, as she and the artist share their appreciation of the natural world. It could be argued that Aitken is a landscape artist who builds on the traditions of the past with a range of new media, responding not only to the physical environment but the virtual one created by communications technology. In many of his works, the camera spends a long time panning across a landscape, lingering over particular features. Instead of a fixed view within the boundaries of a frame, he makes landscape into an immersive experience. We move within and around a place, looking at it from many angles, taking in sound as well as images.

His underlying theme is the disjunction between the age-old cycles of nature and the high-tech, high-speed world of human innovation, but it’s not all bad news. He tells Kent: “I find in this digital age we’re valuing the natural world almost more so than we were in the past.”

Put this down to our media-heightened awareness of impending climate catastrophe, and possibly David Attenborough, but we seem to be re-establishing our sentimental ties with nature via the TV and computer screen. Aitken’s fascination – one might even say reverence – for the natural world is never in doubt, but there is nothing romantic or nostalgic about his approach. He recognises that natural processes occur slowly but the speed of change in our lives gets faster by the day. How do we adjust to these new circumstances of life? There’s a lot of evidence that we’re not coping well. 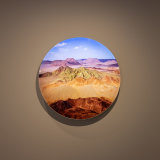 Twenty years ago, Aitken asked: “Are we attempting to reach a state of nirvana through the over-saturation of information?” Today that putative heaven is looking more like an inferno. The rise of social media, once seen as a tool for democratising public discourse, has become a forum for hate speech, conspiracy theories and political extremism. The speed of automation is far outstripping our efforts to reconceive the workplace and social welfare. At every turn, the speed of short-term progress exposes our inability to formulate long-term outcomes. Global warming is only the most prominent of the many issues that defeat the limited imaginations of our leaders.

Aitken’s work inserts itself into these dilemmas but in a way that generates more questions than answers. He creates scenarios that open up spaces for discussion, emphasising that he wants the viewer to also be the “author” of a work. With time-based video installation, this means it’s up to us to decide how long we wish to spend with a piece, and how it is to be interpreted. Aitken doesn’t lay down any hard-and-fast guidelines, which can be liberating or frustrating, depending on your personal preferences.

Although these works set up amazing spectacles, there’s an abstract dimension that leaves one feeling slightly disorientated, as if there’s more to every image than meets the eye. Rather the opposite applies. Although there’s a rigorous intellectual basis to all his projects, Aitken launches an appeal to the senses. He wants us to absorb the sights and sounds he puts forward but doesn’t editorialise.

In this exhibition, his most ambitious works may be sampled only at one remove. Station to Station (2013), was a train journey of 4,000 miles across the United States, in which a changing cast of artists, musicians and other performers travelled in 12 carriages that were also creative studios. When the train stopped, a multi-media ‘happening’ would take place at selected stations. At the MCA we sample this extraordinary project in the form of a documentary.

There are also film versions of New Horizon (2019), which featured an illuminated hot air balloon, and Underwater Pavilions (2016), geometric, metal frame sculptures installed off the coast of Catalina Island, California, accessible only to scuba divers. 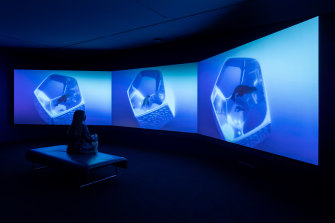 It’s the very scale and ambition of Aitken’s work that ensures we see only the documentation rather than the real thing. His Sonic Pavilion (2009) is an elegant, modern building constructed in a clearing in the Brazilian rainforest. It’s an elaborate home for a tunnel bored 700 metres into the earth, in which a microphone picks up the sounds of the earth’s internal movements. (2017) was a house with mirrored walls erected in the desert near Palm Springs, but since reprised in the snowfields of Gstaad, Switzerland.

Pieces such as diamond sea (1997), set in the Namib desert, one of the most desolate places on earth, are free-standing video works with the same atmospheric intentions as the site-specific installations. We’re invited to travel within our minds to this remote landscape. Somewhere in the sandy wastes, there’s a diamond mine that’s almost fully automated, a vivid testimony to the pervasive, global presence of technology.

The works we can experience, as it were, at first hand, are hardly less abstract and open-ended. Sonic Fountain II (2013/15), which occupies the central part of the display is a vast, dazzlingly white pool of water, topped up by irregular droplets falling from pipes overhead, as a kind of makeshift music. New Era (2018) is an installation combining mirrors and projections, that introduces us to Martin Cooper, who made the first mobile phone call in 1973. It was one of those historic events nobody seems to know about that revolutionised the way we live. Cooper has become an old man but the technology he unleashed is still growing, crisscrossing the planet with ever-increasing volumes of data, at ever-greater speeds. 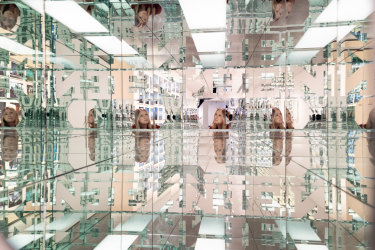 I suspect the work that will hold most appeal for viewers is migration (empire) (2008), a three-channel video installation that takes us inside a succession of cheap, shabby US hotel rooms. Each one is occupied by a wild animal – a mountain lion, a buffalo, a horse, a fox, a deer, a peacock, an owl, a group of rabbits … perhaps the most engaging is the beaver clambering around in the bathtub.

The animals act in different ways, but aside from the passive rabbits they seem utterly confused by the hotel rooms. It’s an absurd scenario that makes us aware of the unnatural character of these repetitive, formula bedrooms scattered across the landscape in every place where humans have settled. Watching the film one begins to identify with the animals, wondering why everyone doesn’t go crazy in these dreary enclosures. Perhaps they do. A huge percentage of Americans today seem to have discovered craziness as a way of life.

Aitken rises above this epidemic of stupidity. Cool, philosophical, a one-man ideas factory, he makes art for those who are willing to let go of the safety rails and step into that zone of uncertainty between the real and the virtual. “Every work I make is an experiment,” he once said, but art galleries are not laboratories. With Aitken’s work, there’s no objective measure for success or failure. It’s up to you, viewer-as-author, to make the call.