A doctor has revealed the ‘veggie-packed’ tuna slice her whole family ‘loves’, and it works well in lunchboxes as well as dinners.

Dr Preeya Alexander, from Melbourne, said the recipe is ‘perfect’ for kids, as the vegetables are hidden, which means even fussy kids get their five a day.

‘This is the veggie-packed tuna slice that my whole family loves,’ Dr Alexander posted on her Instagram page.

‘It’s perfect for my daughter’s lunchbox and my one-year-old loves the stuff – it’s perfect hand held food for little ones.’ 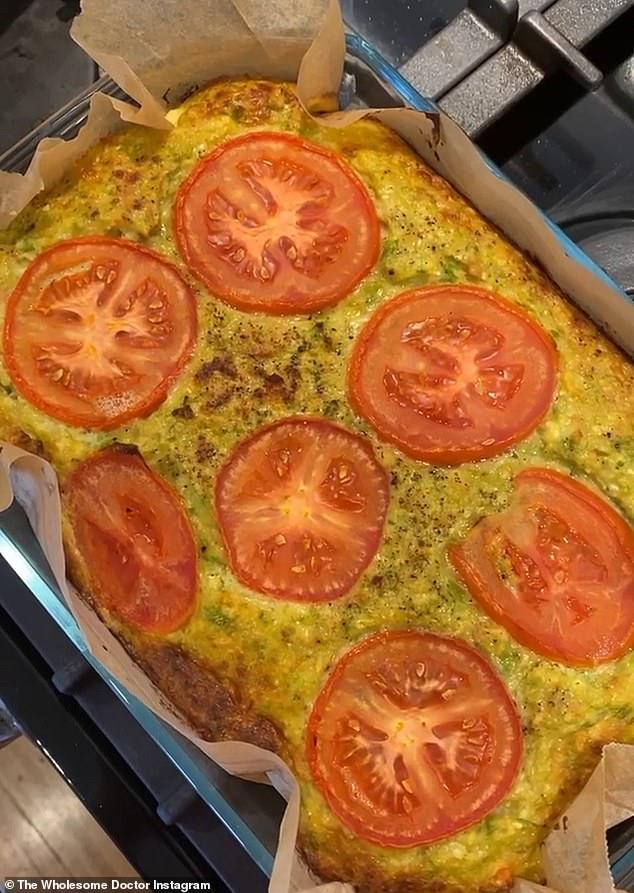 A doctor has revealed the ‘veggie-packed’ tuna slice (pictured) her whole family ‘loves’, and it works well in lunchboxes as well as dinners

To make the tuna slice, Dr Alexander said you’ll need an onion, grated cheese, your choice of plain crackers, six eggs and whatever vegetables you like.

‘I’ve thrown in the veggies I have lying around – I normally add zucchini and corn, but here’s proof you don’t need them to make this deliciousness,’ Dr Alexander said.

‘This batch has defrosted peas, cauliflower, tomatoes and onion.’ 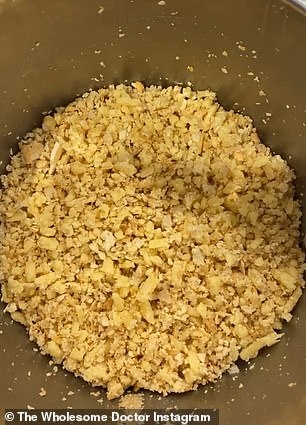 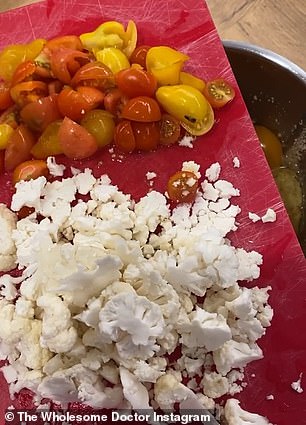 To make the tuna slice, Dr Alexander said you’ll need an onion, grated cheese, some crackers, six eggs and whatever vegetables you like – everything will be blitzed (pictured) 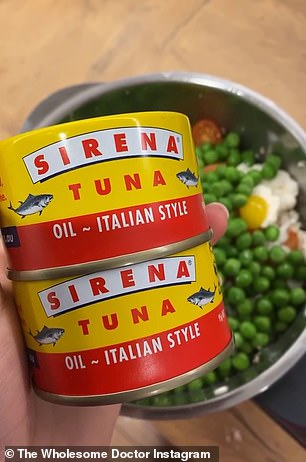 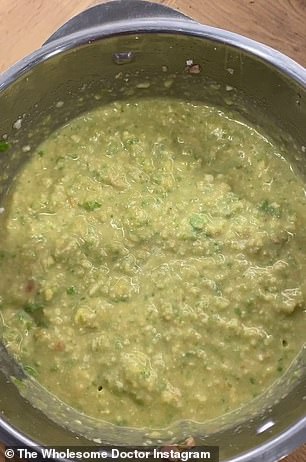 ‘I’ve thrown in the veggies I have lying around – I normally add zucchini and corn, but here’s proof you don’t need them to make this deliciousness,’ Dr Alexander said (pictured in process)

All you need to do to start is blitz the crackers, onion and grated cheese together, before cutting up your vegetables and adding them slowly to the mixture, along with the tuna, eggs and a dash of milk.

‘Bake the goodness for 30-35 minutes on 180 degrees Celsius until golden,’ Dr Alexander said.

Dr Alexander added slices of tomato on top of the slice to make sure there are even more veggies in the meal for her kids.

How to make Dr Alexander’s 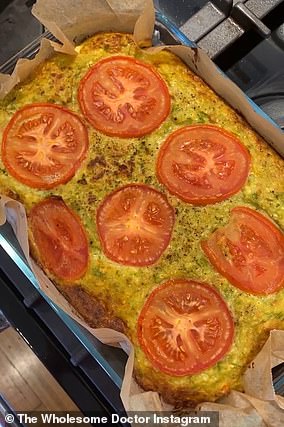 Dr Alexander shared her recipe (pictured) for the veg-packed slice

Half a cup of milk

Half a packet of crackers

A cup of grated cheese

Your choice of vegetables: Dr Alexander went for defrosted peas, cauliflower and tomatoes

1. Add the crackers, onion and grated cheese to a bowl.

2. Blitz it all together with a blender.

3. Cut up your vegetables and slowly add them to the mixture along with the tuna.

4. Pour in the milk gently and add the eggs. Blitz again.

5. Spoon everything into a baking tray and add sliced tomatoes on top. 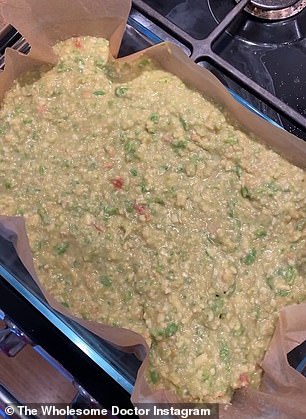 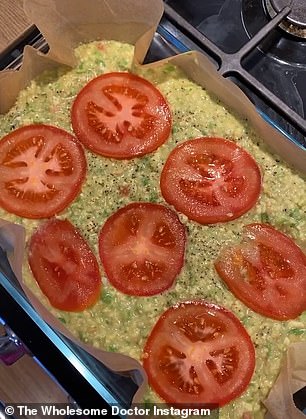 Thousands of home cooks who saw the simple recipe said they loved the look of it, and would definitely try it with their own children (pictured before cooking)

Thousands of home cooks who saw the simple recipe said they loved the look of it, and would definitely try it with their own children.

‘This looks tasty, I might make it this week,’ one commenter posted.

Another added: ‘Omg, this looks incredible’. 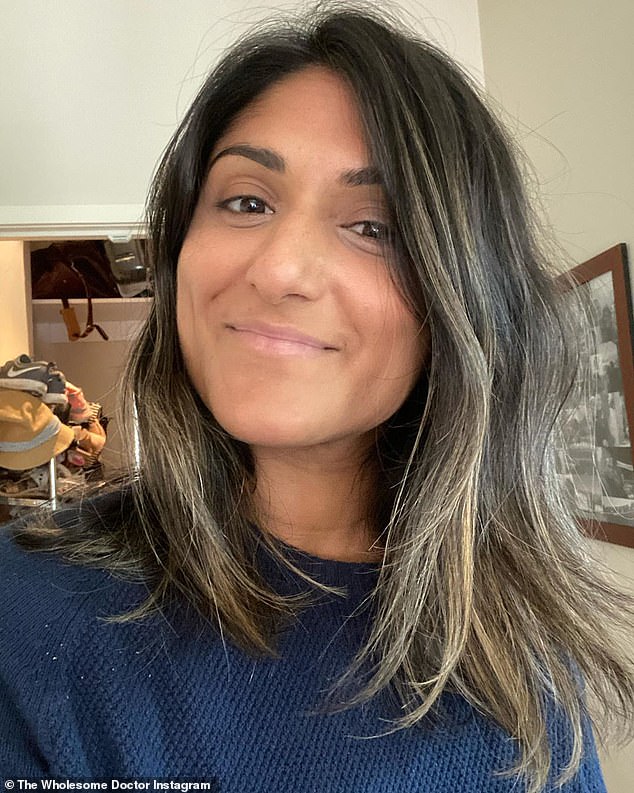 Previously, Dr Alexander (pictured) revealed there are three things she is asked time and again by people – and they have very simple answers

Previously, Dr Alexander revealed there are three things she is asked time and again by people – and they have very simple answers.

The first question Dr Alexander said she is asked on a surprisingly regular basis is why people feel as though they need to poo straight after eating.

‘The reason why you may need to run to go to the toilet after a meal or a coffee is called the gastro-colic reflex,’ she said.

‘When food enters the stomach, it stretches and an involuntary reflex occurs – a hormone signals the colon to start contracting.’

Once your colon begins to contract, Dr Alexander said it causes your previously digested food to move through the colon, and this can in turn make you feel as though you need to poo.

‘The food you have just eaten is not “going through you”, despite what it might feel like,’ she added.

Instead, it’s the old food that is being ‘pushed along’.

Why should you finish the entire antibiotic course?

The second question Dr Alexander said she’s asked frequently is why we are always told by medical professionals that we need to finish an entire course of antibiotics.

‘This is a big one lots of you requested,’ the GP said.

‘We will always try to give you the shortest course of antibiotics possible to eliminate a bacterial infection – but even if you feel tip top, you should take an antibiotic as prescribed to a) completely eradicate the bacteria and b) prevent antibiotic resistance (the bugs can adapt and mutate so that an antibiotic that once killed them will not),’ she said.

Dr Alexander acknowledged that there is some debate about this question in the medical world insofar as often shorter courses of antibiotics have been shown to be equally effective as longer ones.

‘But my main tip is stick to what you are prescribed!’ she said.

You should always finish the course, whatever length it is.

Why does a cough get worse at night?

It’s the time of year where we’re moving into cold and flu season, but Dr Alexander said that this winter, if you have even a tickle of a cough, you should make sure you’ve been tested for COVID-19.

‘Coughs are commonly worse at night as the air is colder and drier – and that tends to irritate the airways,’ she explained.

‘You also lie flat to sleep and mucous can drip down the back of the throat which can trigger coughing.’

Dr Alexander said coughs are worse at night for these reasons, but you can aid your cough by ‘sleeping on a few pillows’ and using heat to warm the air and make sure you’re not too cold.

Of course, cough medication before you go back to sleep is also a good idea.