Almost three months into the COVID-19 vaccination program the federal government is still working out the best way to immunise people with disabilities despite their inclusion in the first two phases of the vaccine rollout.

The disability royal commission has called a hearing into the federal government’s handling of the vaccine rollout for people with disabilities and disability workers, as Labor and the Greens accuse the Commonwealth of neglecting some of the country’s most vulnerable. 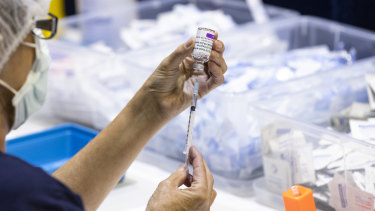 So far 101 disability care homes have had first vaccines, and 19 have received second doses.Credit:Getty Images

Royal Commission chairman Ronald Sackville QC said the government announced this week it supported or supported in principle 21 of the 22 recommendations the commission made in November, including recommendations explicitly addressing access to a vaccine for people with disability and disability support workers.

“Quite a few expressed their concerns about what they said were delays in the rollout and the impact it was having on people with disability,” he said. “So all of that together indicates that there are issues that we ought to have a look at.”

More than 2.1 million vaccinations have been administered across the country so far.

Commodore Eric Young, co-ordinator of the vaccines operation centre, said 101 disability care homes have received first doses to date, and 19 have received second doses. There are more than 6000 disability homes with 25,000 residents across the country.

“Those most at risk are those older Australians in residential aged care facilities, where we are using the majority of our vaccine administration is a capacity to get those done as soon as possible,” he said on Thursday afternoon.

“We are in parallel looking at a number of vulnerable cohorts including the disability sector … and we will continue to trial the way we administer those vaccines with the disability service providers and continue to increase the rate of those over the coming weeks and months.”

The disability royal commission hearing on May 17 will investigate concerns over the speed of the rollout for people with disability, as well as communication and consultation with the sector about changes to the rollout.

Labor’s NDIS spokesman Bill Shorten welcomed the special hearing into how the government had responded to the commission’s November report.

“This has been disgraceful conduct by the Morrison government and they must now finally act to protect vulnerable Australians.”

Greens Disability spokesman Senator Jordon Steele-John said people with disabilities had once again had been left out of the federal government’s COVID-19 response.

“With the vaccine rollout, it’s clear the Morrison government has willfully ignored the warnings of the disability community and the Royal Commission chair, choosing to exclude disabled people and the people who support us from receiving priority vaccinations,” he said.

On-site vaccinations in disability care homes began on Tuesday in the Northern Territory and the ACT. A Department of Health spokeswoman said it was a complex logistical operation that has started in a small number of sites with help from the disability sector and care providers.

“This has provided the government opportunity to refine the delivery model for disability to ensure, as we now ramp up, the model is appropriate and able to meet the needs of people with disability,” she said.

Get our Coronavirus Update newsletter

Stay across the news you need to know related to the pandemic. Sent Monday and Thursday. Sign up here.