Designer clothes, shoes and handbags made from MUSHROOMS could offer a greener, more ethical alternative to leather, study suggests

Making fashion items such as shoes, bags and clothes from fungi could be an environmentally-friendly alternative to traditional leather, a study claims.

Researchers say mushrooms can be pressed and chemically processed to create a substance tough enough to compete with leather.

Traditional leather and its alternatives are typically obtained from animals and synthetic polymers.

But leather production, as with all livestock-dependent industries, is bad for the environment because it requires lots of land and resources and produces high quantities of greenhouse gases, such as carbon dioxide. 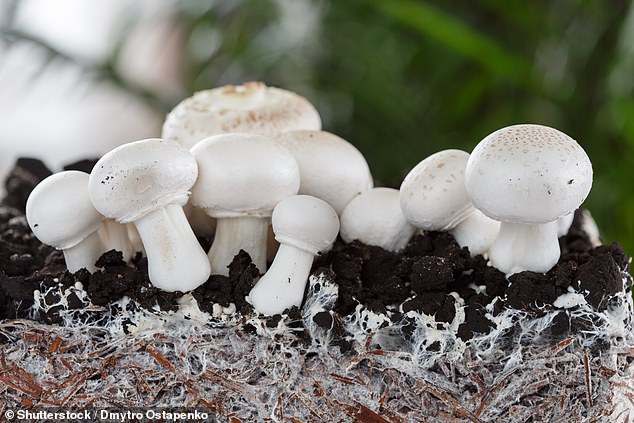 Researchers say mushrooms can be pressed and chemically processed to create a substance tough enough to compete with leather. Traditional leather and its alternatives are typically obtained from animals and synthetic polymers (stock)

Study co-author Professor Alexander Bismarck, from the University of Vienna, Austria, said: ‘This is where leather-like materials from fungi come into play, which, in general, are CO2 neutral as well as biodegradable at the end of their life span.’

Leather substitutes can be produced from fungi by upcycling low-cost agricultural and forestry by-products such as sawdust.

These serve as a feed for the growth of mycelium – a matted mass of elongated fungal threads – which grow into a sheet and within a couple of weeks the fungal biomass can be harvested.

Professor Bismarck said: ‘As a result, these sheets of fungal biomass look like leather and exhibit comparable material and tactile properties.’

The first biotech companies are already marketing materials derived from fungi, and researchers have made paper and foam-like construction materials for insulation from white button mushrooms.

The authors add: ‘Fungi as a raw material for leather substitutes provide a cost-effective, socially and environmentally sound alternative to bovine and synthetic leather and are of particular interest to sustainability-conscious consumers and companies as well as to the vegan community.

The world’s oldest mushroom has been discovered in the Democratic Republic of Congo and dates back to around 810 million years ago.

Preserved in rock, the fossil fungi were found near the city of Mbuji-Mayi in a ‘major’ discovery that smashes the previous age record by some 350 million years.

The fungi played a key role in the history of life by helping to create primordial soil that would later allow plants to first grow on the land.

The primitive mushrooms grew in a lagoon or coastal lake, the researchers said.

‘This is a major discovery — and one that prompts us to reconsider our timeline of the evolution of organisms on Earth,’ said paper author and geologist Steeve Bonneville of the Free University of Brussels.

The fossilised remains of the fungal mycelium — a vast underground network of root-like filaments for extracting nutrients from the soil — were discovered in rocks dating back to between around 715–810 million years.

The ancient rocks containing the fungus are part of the collection of the Africa Museum in Tervuren, Belgium, while lies just outside of Brussels.

‘Substantial advances in this technology and the growing number of companies that are producing fungi-biomass-based leather alternatives suggests that this new material will play a considerable role in the future of ethically and environmentally responsible fabrics.’

Leather made from cow hides brings ethical issues as well as concerns over deforestation and greenhouse gas emissions linked to livestock farming.

Treating it, known as tanning, also uses solutions that can be harmful if they leach into the environment.

Meanwhile, plastic alternatives are made from fossil fuels and are not biodegradable.

Professor Bismarck said: ‘We tend to think of synthetic leather, sometimes known as ‘vegan leather’, as being better for the environment.

‘However, traditional leather might be ethically questionable, and both leather and plastic substitutes have issues with environmental sustainability.

‘Fungi-derived leather brings none of these issues to the table, and therefore has considerable potential to be one of the best leather substitutes in terms of sustainability and cost.’

Co-author of the latest research, Dr Mitchell Jones, now at the University of Vienna, said fungal leather is becoming a ‘promising new frontrunner’ in the quest for ethical clothing.

Writing in Nature Sustainability, the researchers say commercial appetite for environmentally-friendly fashion is soaring among sustainability-conscious consumers and companies – as well as vegans.

Dr Jones said: ‘Renewable, bio-derived clothing is a growing market, and fungal leather is becoming a promising new frontrunner in the quest for sustainable and ethical clothing.’

Tags: and, Clothes, designer, Ha, shoes
You may also like
Celebrities News