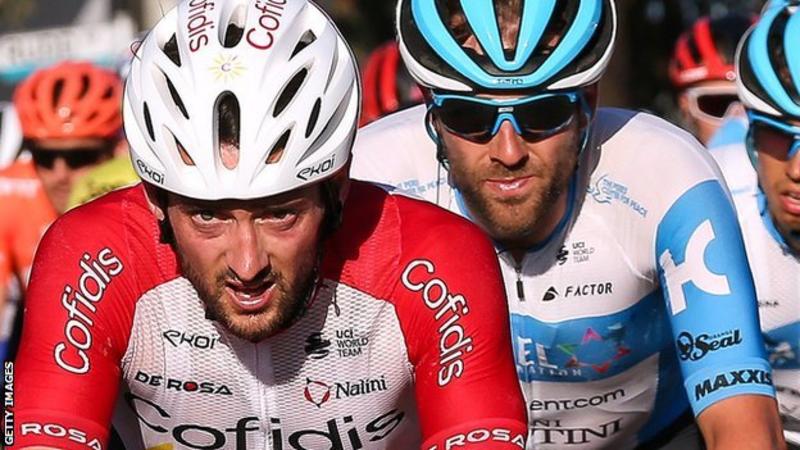 Cofidis riders are being “held against their will” and “treated like plague victims” in the United Arab Emirates, says team president Thierry Vittu.

The final two stages of the UAE Tour were cancelled after two “suspected” coronavirus cases, with riders at the event then tested for the virus.

While the majority of teams have left the UAE, Cofidis are one of four still under lockdown.

“We always hope things will get better soon and nothing happens,” Vittu said.

On Saturday, the organisers of the UAE Tour said all 167 people at the event who were put into quarantine, including British riders Chris Froome and Adam Yates, had returned negative tests for coronavirus.

But French teams Cofidis and Groupama-FDJ, the UAE team and Russian team Gazprom, who had a second test on Sunday, remain under quarantine in their hotel.

“I think that this situation is really not normal. We’re being held against our will in a place we didn’t choose and for an unknown length of time,” Vittu said in a statement.

“It would be nice if the media would take over our situation, just to add pressure where necessary.

“When we meet someone from the hotel in the corridor, he runs away. We are treated like plague victims; our rooms have not been made since we arrived five days ago, we have to go in front of the elevator, there is a cart and we help ourselves with sheets, soaps and towels.

“That’s the situation, some live it well, for others it’s more complicated.”

In a statement, the UCI, world cycling’s governing body, said: “We’ve directly contacted government authorities and hopefully riders and staff will be able to leave the country today.”

‘A hullabaloo for nothing’

Cofidis sporting director Roberto Damiani has reportedly threatened to go on hunger strike if the coronavirus quarantine does not end soon, while Australian rider Nathan Haas told BBC Radio 5 Live it all appears to be a “bit of a hullabaloo for nothing”.

The 30-year-old, who excels in the early-season classics, said the situation is threatening to “derail” his season.

“From a professional perspective our team is really hurting because we’re being disadvantaged when other teams have not been,” said the former Tour of Britain winner.

“This is now five, six days without being able to touch a bike. It is already enough to completely derail the whole process.

“It’s a strange situation. We are not really getting any information and that is the most frustrating part of the whole experience.

“You are following the news pattern of your story in the media as opposed to being told from your hotel. There are security guards everywhere and all the doors are shut.

“Our particular floor was where there were some suspected positive cases. The irony was, that everyone on this floor, which is three of the 18 teams at the race, were actually dining together for the first three days of the quarantine – sharing the same buffet room and public spaces.

“Anyone who could have been contact with us, which everyone was, has now left the UAE and travelled abroad. So it’s very fortunate that everyone on the fourth floor has tested negative but if you look at the protocol you have to say it was not done very well because there could have been 600 people – potential positives – flying to everywhere in the world.”

Tags: Cofid, Coronavirus, Quarantined
You may also like
Celebrities News