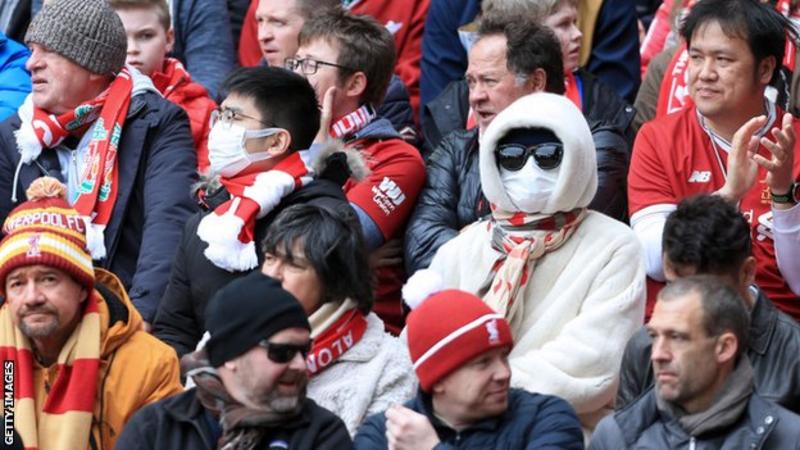 There is “no rationale” to postponing sporting events in Britain because of coronavirus, according to the Department of Culture, Media and Sport.

A meeting between the DCMS and sport governing bodies on Monday discussed potential responses if the outbreak worsens and mass gatherings are banned.

“Clearly it is a moving situation so just keep talking and go from there.”

The UK is remaining in the “containment” stage of its response to the coronavirus outbreak following a meeting of the emergency Cobra committee.

Earlier on Monday, culture secretary Oliver Dowden said sporting events in Britain are unlikely to be affected by coronavirus in the immediate future.

Four people have died in the UK after contracting the virus, with more than 300 testing positive.

Last week, the Premier League and English Football League said pre-match handshakes between both teams and officials will not take place until further notice because of fears over the spread of the virus.

The measure came after the government asked the Premier League “to step up its contingency planning”.

Premier League executive director Bill Bush did not wish to comment on the possibility of matches being played behind closed doors when he came out of the meeting in London.

“I am not going to comment on things that are speculative,” he said.

But the DCMS later said the meeting included discussions of how staging sporting events behind closed doors “could work in practice” if the situation changed and that became necessary.

Wales’ home Six Nations match against Scotland will be played as planned in Cardiff this weekend.

Outside the UK, a number of events have been postponed – including the France v Ireland game in the Six Nations, which was set to be held in Paris on Saturday.

French sports minister Roxana Maracineanu also said the country’s top-flight football matches will be played behind closed doors or with a maximum attendance of 1,000 people until 15 April.

The Indian Wells tennis tournament in the United States is another high-profile postponement.

“Based upon the current scientific advice from the Government’s medical experts there is no rationale to close or cancel sporting events as things stand,” the DCMS said.

“We will remain in regular dialogue with sports governing bodies and broadcasters, ensuring they are in receipt of the most up to date guidance from the health authorities.”

Monday’s meeting was led by Anna Deignan, the DCMS head of sport, but there were no ministers present.

A number of attendees, who wish to remain anonymous, said that despite the grave uncertainty the sports industry is now facing, the mood remained calm and measured. But there was little clarity offered by officials when they were asked how or when the government might order sport to go behind closed doors, as we have seen in increasing numbers of other countries.

According to one present, the message was “carry on as you’re doing for now but start to ready yourself”.

One thing that emerged was how a “one size fits all” solution to this may be impractical.

While some leagues said they are desperate to complete their seasons to preserve the integrity of their competition, others expressed fears at the devastating financial impact that sacrificing matchday revenue would involve, and made clear their insurance policies would come nowhere near to covering such a blow.

Other major events suggested they may favour postponements.

Public health experts are known to be concerned that closing stadiums may just mean fans gather in pubs to watch sport, and the virus spreads that way instead.

Broadcasters were asked to go away and work out the financial cost to them if they were asked to block feeds to pubs, and the idea of asking satellite broadcasters to make coverage free-to-air so people could watch at home was also raised.

Meanwhile, the Football Association has made clear to the football authorities that it would be willing to waive the traditional “TV blackout” for matches kicking off at 15:00 on Saturdays if fans are barred from games.

Tags: 'No, Coronavirus, fo, rationale'
You may also like
Celebrities News