Queues in the gents toilets for the first time! Twitter users joke that men are only starting to wash their hands because of the coronavirus outbreak

Regular hand washing is being hailed as the best way to halt the spread of coronavirus, and as people line up for a spot of diligent scrubbing, it’s led to the unusual sight of queues in the men’s toilets.

James O’Brien on LBC asked callers to tell him when they first realised the coronavirus was serious, and one called Martin told him the moment of truth came in a motorway service station.

‘I stopped in the services on the M6 and went to the toilet. The normal behaviour of gentlemen is to nip in and nip out as quickly as possible.’

But in tweets from all over the world people have expressed their horror over why men weren’t washing their hands in the first place. 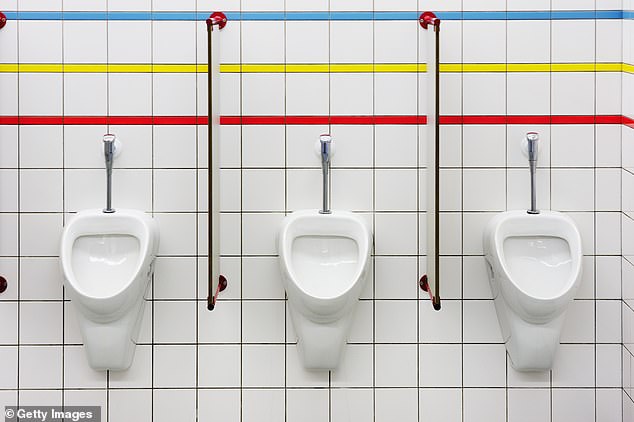 According to Twitter it used to be unusual to see men using the sinks after using the toilet, but since the Coronavirus outbreak men have been washing their hands

Figures do back up the idea of men being lax with their hand hygiene.

In a YouGov survey of 2,000 people 32 per cent of men were willing to admit they didn’t wash their hands after using the toilet in a public place, compared to 18 per cent of women.

Los Angeles-based comedian Demi Adejuyigbe tweeted: ‘Hmm didn’t realize until coronavirus how shocking it is to walk into the public men’s room and see all the sinks actually being used.’

When called up on his tweet he joked: ‘Ok genius where do you suggest we “wash” our hands, huh?? in the decorative waterfalls they put beneath the mirror????’ 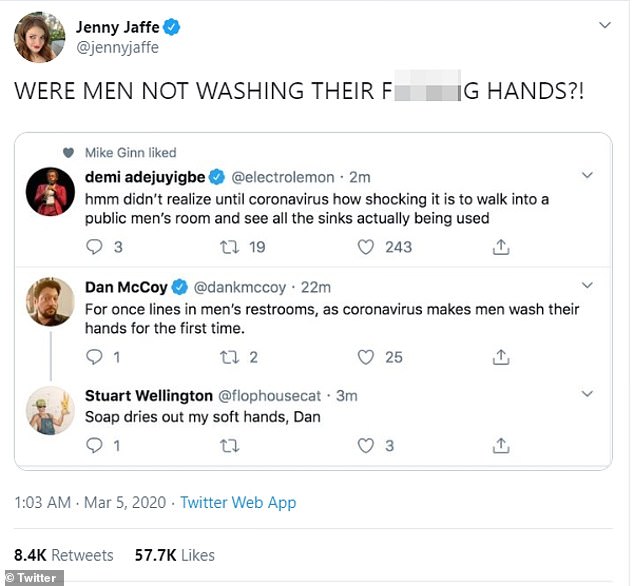 Dan McCoy, a writer from New York, said: ‘For once, lines in men’s restrooms as coronavirus makes men wash their hands for the first time.’

He later clarified: ‘Just to be clear, since this has like 50k likes at this point — *I’ve* been washing my hands.

‘I just noticed a line for the first time and was like “OHHHHHH”.’

After a flurry of joking tweets, Los Angeles-based comedy writer Jenny Jaffe summed it up by writing: ‘Were men not washing their f***** hands?’.

Dan McCoy, a writer from New York, said he had seen lines forming outside of toilets because it was taking men more time to finish after they’d urinated and washed their hands

Others joined in the discussion with some admitting it just wasn’t always the done thing or that their spouses were confused as to why they would need to.

One said: ‘I think this is a good time to let you know that I became obsessed with proper hygiene as a young kid after reading a book with creepy pictures of germs, and TO THIS DAY, other men see me WASHING MY HANDS LIKE A HUMAN and call me a ‘germaphobe.”

Another added: ‘Report from the field: YES. MEN FOR SOME REASON THINK THEY ARE EXEMPT FROM HANDWASHING.’

One wrote: ‘This is why I NEVER, ever shake men’s hands. In professional settings I nod, smile, and introduce myself with my arms at my sides. I have been called out on this, and I simply state that I don’t touch men’s/people’s hands.’ 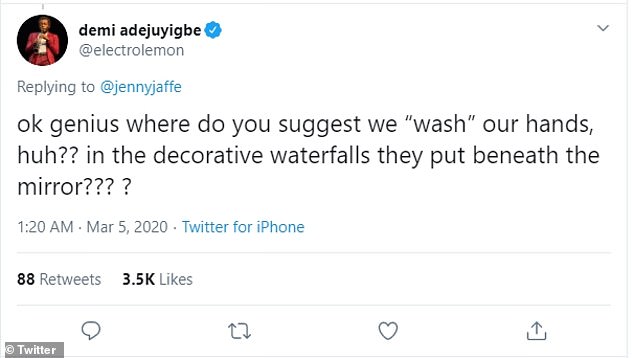 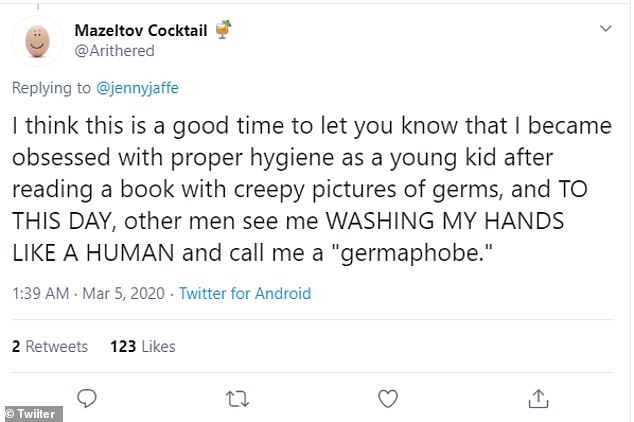 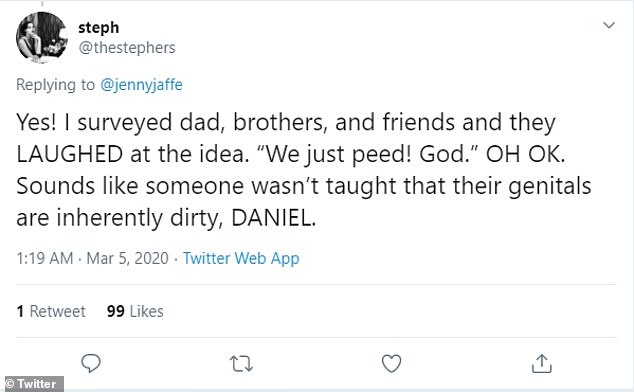 The tweets caused a storm of reaction, with one woman retweeting a screenshot of them both on her timeline and others saying their family members weren’t used to washing theirs

‘Yes! I surveyed dad, brothers, and friends and they LAUGHED at the idea. ‘We just peed! God.’ OH OK. Sounds like someone wasn’t taught that their genitals are inherently dirty, DANIEL,’ another said.

Another wrote: ‘Sadly, plenty of men don’t. A bartender told me once that he appreciated that I told him when the men’s room was out of soap because it showed that I wash my hands.’

One joked: ‘I don’t touch anything in public bathrooms except my weewee and then I rub my fingertips together afterwards so the heat built up by the friction kills all bacteria. You have to be a ninja about these things.’

Another penned: ‘Men often don’t, & they often don’t flush toilets & urinals. Worked in bars for five years & noticed this. Also, many guys use their cell phones at urinals. I think it’s on the test of us to sever relationships w/ these ppl.’

One said: ‘It’s shocking how few of us do. That’s why I cringe whenever one moves in for a handshake. I’ve seen way too many men go from the stall straight out the door.’ 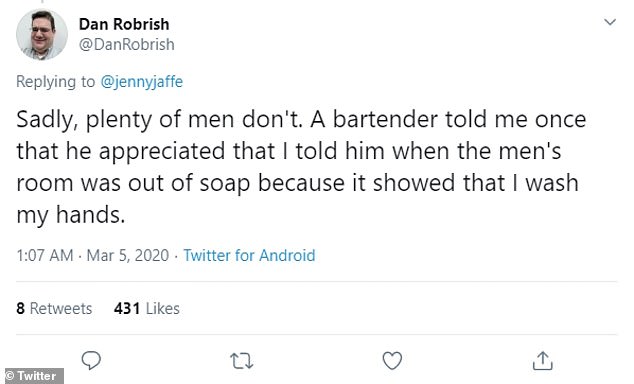 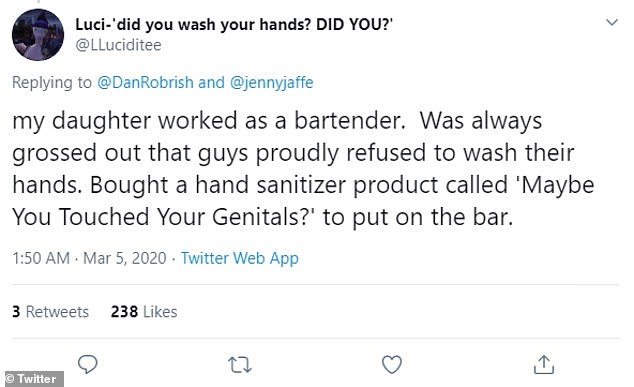 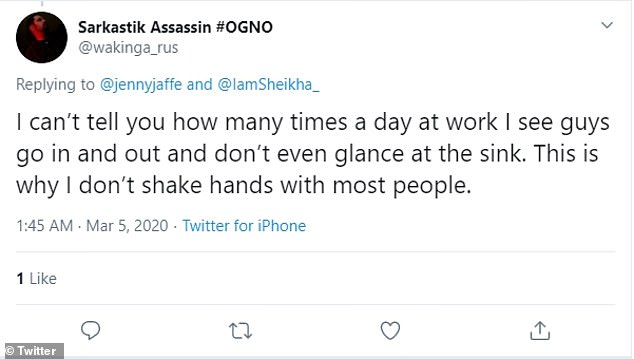 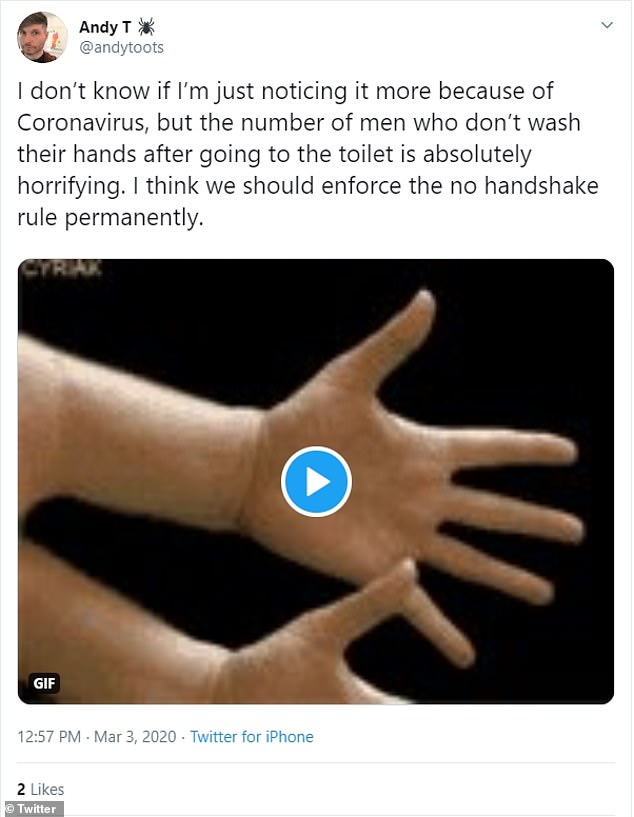 Some commented that they had to deal with people who refused to wash their hands at work, and it’s more common than thought

Another added: ‘Men somehow think their penises are clean so they don’t have to wash after urinating. I had this conversation with my BIL and he was amazed at my disgust.’

Advice from the British government has called for people to start washing their hands thoroughly for around 20 seconds to ward off Covid-19 and help slow the rate of infection.

Handwashing will kill virus where it is present, but washing specifically after urinating or defecating is unlikely to specifically help – as any virus found in faeces has usually been destroyed on its journey through the guts, according to an expert.

Professor John Edmunds, at the Centre for the Mathematical Modelling of Infectious Diseases, London School of Hygiene & Tropical Medicine, said: ‘It isn’t a very pleasant thought, but every time you swallow, you swallow mucus from your upper respiratory tract. 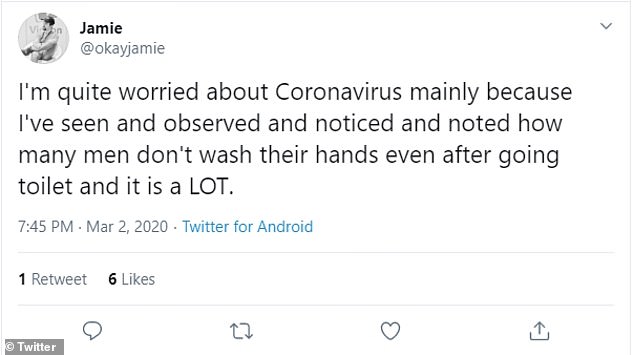 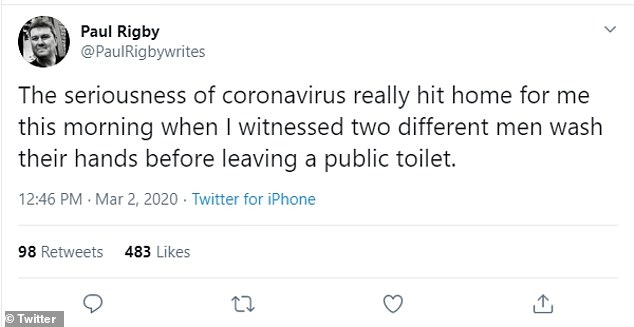 These men had also noticed others actually washing their hands, when it just wasn’t a normal sight to see

‘In fact, this is an important defensive mechanism. This sweeps viruses and bacteria down into our gut where they are denatured in the acid conditions of our stomachs.

‘With modern, very highly sensitive detection mechanisms we can detect these viruses in faeces.

‘Usually, viruses we can detect in this way are not infectious to others, as they have been destroyed by our guts.’

Tags: Coronavirus-consious, have, men
You may also like
Celebrities News