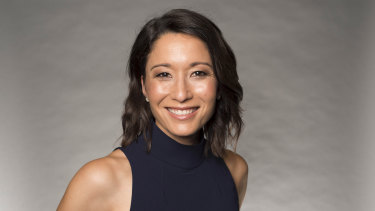 Physical Culture, or "Physie", as it is affectionately known by its enduring legion of female practitioners, might seem a curious subject with which to launch the new season of Compass, the ABC's program about religion, ethics and social values. Since ABC journalist Kumi Taguchi took over in 2017 the role of host, held by Geraldine Doogue since the show's inception in 1988, the focus has shifted away from religion and towards broader concepts of connection and belonging. But surely a report on women and girls marching in leotards is stretching the brief?

Not at all, says Taguchi, who chose the one-hour special to air on International Women's Day.

"That story is beautiful because it's about intergenerational relationships. A non-Compass program would probably tell that story differently, but the stories we commission go deeper into the human side of life. It's not just about Physie. It's about grandparents and grandchildren and a home and a family that might not be blood, but it's where you belong."

Taguchi, who says she has "no issue with religion, but it's not my area of passion", suspects some viewers "preferred the previous incarnation" of the program.

"I've been really proactive and determined to shift the perception of Compass as 'that religious show off to the side' to one that looks at the core issues of our life: Why are we here? Why do we do what we do? What's our purpose in life? How do we live a meaningful life?"

These are questions Taguchi sought to answer for herself last year, when she travelled to Tokyo to trace her late father’s footsteps. It was the first time she, or Compass, had done a story in which the journalist became the subject.

It gave me a lot of insight into how other people feel when we ask them to tell their stories.

"I felt incredibly vulnerable at times – quite exposed. It gave me a lot of insight into how other people feel when we ask them to tell their stories … I believe that if every story was driven by the journalist's personal story it would probably get a bit boring and potentially self-serving. But in Japan, because I felt so passionately about the subjects of home, belonging, family, absent fathers, and growing up in two different cultures, I felt there was a reason to tell that story."

She agrees that social media has perhaps fuelled a desire for "personality and authenticity" in journalism. Racist trolling and a skewed perception of her work through the Instagram lens made Taguchi pull back from the platform.

"A lot of my time and mental energy was spent thinking about social media. It didn't seem to be the right place for my brain. Once I'd set my boundaries around it I gained more time and I felt my creative brain switch back into gear."

As are many at the national broadcaster, the Compass team awaits May's federal budget with bated breath.

"We've made a collective decision just to keep making the best content that we can for as long as we can. We have no idea what the future may hold. But in an increasingly atheist society, I do find there's a really important home for Compass. We are the only show on Australian television that has those issues as part of our brief. We see it as incredibly important to allow people to explore those ideas without judgment, without feeling like it's all about a church. We've noticed an increase in our digital space so we're engaging with a lot more young people. I sense there are a lot more people wanting content that answers questions around their lives."