A triumphant John Coates, freshly returned from his part in delivering what he declared “the greatest Olympics Games of all,” has made clear his intention to remain on the Australian Olympic Committee for life.

Coates also revealed that while he plans to step down as AOC executive president at the organisation’s next annual meeting, he will continue to charge the AOC a six-figure consultancy fee for his future services to Australia’s Olympic movement. 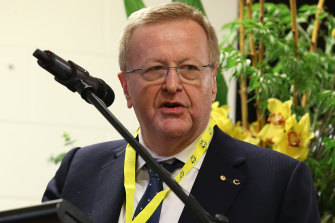 John Coates is stepping down as AOC president but remaining as honorary life president.Credit:Getty

The 71-year-old Olympic supremo detailed his post-Tokyo plans after delivering a National Press Club address in which he argued against any proposed boycott of next year’s Winter Olympics in Beijing and reflected on Tokyo successfully hosting an Olympics in the middle of the pandemic.

After he steps down as AOC president, he will remain on the AOC board until Paris 2024 by dint of his International Olympic Committee membership. After that, he intends to take up the position of “honorary life president,” a new role written into the AOC constitution at last year’s AGM.

Coates said the timeless position didn’t carry voting rights on the AOC board “but it will carry influence, if they want it, within the organising committee”.

Although the position is described as honorary, Coates will continue to charge the AOC about $150,000 a year as a consultancy fee. One of his duties will be to serve as a non-executive director of the organising committee for the 2032 Olympics, a Games Coates was instrumental in bringing to Brisbane.

Coates’ new consultancy fee is significantly reduced from the $717,500 he charged the organisation in 2017, the year when his control of the AOC was unsuccessfully challenged by former Hockeyroo Danni Roche, or the pandemic-adjusted $475,000 he pocketed last year.

Danni Roche and John Coates after the bitterly contested 2017 AOC board elections.Credit:Mark Metcalfe

It follows a review of the AOC’s remuneration policies and governance structure led by board member Craig Carracher, a potential candidate to replace Coates.

Under the new remuneration framework still being finalised, the next AOC presidency will return to being a non-executive role and likely be compensated with a director fee of between $150,000 and $200,000.

When Coates took over as the forerunner of the AOC in 1990, its five previous presidents had all been volunteers. The position of executive president was created personally for Coates after the Sydney Olympics. To secure the support of the AOC athletes’ commission ahead of the 2017 vote, Coates promised to relinquish the job after the Tokyo Games.

The most likely candidate to replace Coates is Ian Chesterman, the current AOC vice president and chef de mission whose calm stewardship of the Australian team in Tokyo received strong reviews from athletes and coaches. Coates on Wednesday declined to name his preferred successor but said they should come from the AOC board. 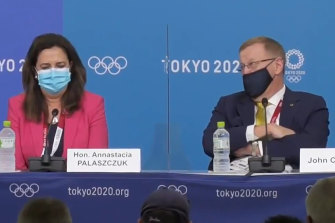 Queensland Premier Annastacia Palaszczuk and AOC president John Coates in Tokyo for the announcement of Brisbane as the host city for the 2032 Olympic Games.Credit:

Coates will have led the AOC for 32 years by the time of next year’s annual general meeting. Having played a key role in delivering the Tokyo Games as chair of the IOC’s coordination commission and landing Brisbane the 2032 Games, he stands down at a time of immense personal influence in both Australian and global sport.

The Sydney Games were heralded at the time of their closing ceremony as the “best ever” by former IOC boss Juan Antonio Samaranch. Coates said that due to their unique challenges and extraordinary reach, the Tokyo Games had a greater impact. “That is why I believe Tokyo hosted the greatest Olympic Games of all,” he said.

Tokyo’s state of emergency meant that the city was quarantined from its own Olympics, with neither spectators nor family members of athletes able to attend. All athletes who competed at the Games were tested daily and a large-scale outbreak in the Olympic village was avoided.

“If the Olympic village were a country it would have been the fourth most vaccinated nation in the world and the global leader in daily testing,” Coates said.

The Olympics coincided with a fourth wave of COVID-19 infections in Tokyo, which peaked at nearly 6000 daily cases a few days after the closing ceremony. Since then, vaccinations and other public health interventions have slowed the infection rate to a trickle.

Tokyo currently has fewer COVID-19 patients in hospital than Melbourne or Sydney and in the past 24 hours, only 77 new cases were detected.

In the lead-up to Tokyo, the Japanese government and Tokyo’s organising committee faced strident calls, including from Japanese health authorities, to cancel the Games. Coates said that if this had happened, it would have been “for fear and not fact”.

Coates’ speech to the press club ranged across infectious control protocols in Tokyo to bureaucratic disputes in Brisbane to human rights concerns in China, where Beijing’s persecution of the Uyghurs is fuelling calls for a boycott of February’s Winter Olympics.

Coates, an IOC vice-president, said although the IOC charter recognises the importance of human rights, the organisation had no capacity to raise such concerns with host nations.

“It is not our remit and we do not have the ability to go beyond the conduct of the Games themselves or the way Olympic committees conduct themselves,” he said. “We are not a world government. We have to respect the sovereignty of the countries who are hosting the Games.”

Tags: AOC:, Coates, down, from, p, Step, to
You may also like
Celebrities News