With a dash of country, a pinch of pop, and plenty of fun, Callista Clark’s debut EP is a perfect introduction to this rising talent, and she tells HL all about the making of ‘Real To Me.’

“I went through a breakup, and I was really upset about it, but I had people telling me that what I was feeling wasn’t real yet or wasn’t valid yet, just because of how young I was,” says Callista Clark when describing the inspiration for the title track of her debut EP, Real To Me. Young in age but wise in spirit (and with a talent beyond her years), Callista channeled this honest songwriting not just into “Real To Me,” but in all five songs that make up her initial release of energetic, country-fueled pop.

“I just wanted to be able to say that if you feel something, it’s a real and valid feeling. No matter your age,” she tells HollywoodLife over email. Themes of heartbreak and validation can be found throughout Real To Me. On “Change My Mind,” Callista delivers an anthem for every wronged woman (“I ain’t gonna make it easy on you / you gonna have to show me why you need one more last chance”). In “Heartbreak Song,” she expertly captures how the pain of a breakup is inescapable (“And it follows me with the memory, everywhere I go / Like some kind of joke”), a very real feeling for anyone who ever experienced such loss.

Real To Me collects Callista’s songwriting for over the past years, with the latest being “It’s Cause I Am.” The video for the song just dropped and sees Callista show off her many facets and multitudes (and a wardrobe that seems inspired by Dolly Parton, Donna Summers, and Avril Lavigne.) The song has resonated with Callista’s fans. “I love how many people have latched onto it,” she tells HollywoodLife, “because it shows off a side of me that I don’t think the other songs in the collection show as heavily.”

In an EXCLUSIVE interview, Callista dishes on Real To Me, Olivia Rodrigo (“I hope to get to meet her one day”), which instrument she’s going to learn next, and what fans can expect next from this stunning young voice. 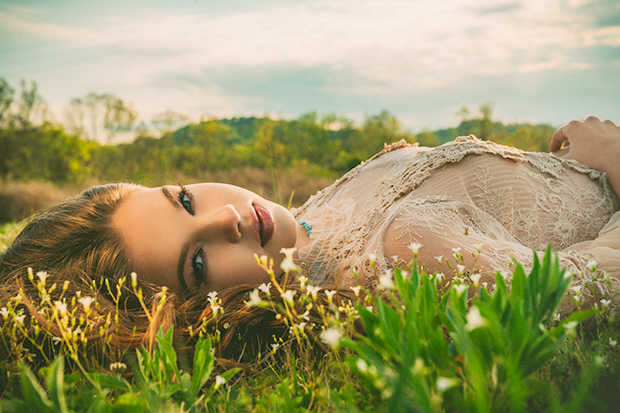 HollywoodLife: It’s been a few months since you released your debut EP, Real To Me. How does it feel to have this project out in the world? Are you still basking in the glow of sharing it?

Callista Clark: Yes, I am! I’ve been waiting for this my whole life and writing specifically for this collection for the past 3 years. It’s the best feeling in the world to finally show everybody what I’ve been working on. I can’t wait to see what happens next and where it goes from here.

The title track to “Real To Me” is a poignant observation of how, at age 17, you feel caught between being “too old to cry and too young to drive.” Was there a moment that inspired this song?

I actually wrote “Real To Me” when I was 15! I went through a breakup, and I was really upset about it, but I had people telling me that what I was feeling wasn’t real yet or wasn’t valid yet, just because of how young I was. I was scared to tell people when I felt like I loved somebody because then I’d be told that it wasn’t real love yet. I’d hear things like, “you’ll feel real love someday in the future when you’re older.” That didn’t matter to me, though. It felt very real to me! I just wanted to be able to say that if you feel something, it’s a real and valid feeling. No matter your age.

It’s always interesting to see which songs that fans latch onto. Have there been any moments like that with Real To Me, an “oh, I didn’t expect you guys to like that song that much?”

“It’s Cause I Am” was the newest song I ended up recording for this collection. It was December 2019, and I was supposed to be done writing for the year, but two of my favorite songwriters, Laura Veltz and Cameron Jaymes, said they were available to write for two days, so I went up to Nashville as soon as I could. We ended up getting this super fun song to show the sassy, sarcastic side of me. That’s how It’s Cause I Am came to life. I love how many people have latched onto it because it shows off a side of me that I don’t think the other songs in the collection show as heavily.

Is there a particular line that you’re proud of on Real To Me? One that really makes you smile.

“Too soon to have life down to a T, but the way that I feel is real to me.”

That one is definitely my favorite because I get that I am young, and I’m not trying to say that I know everything. I know I don’t. I’m still figuring out who I am as a person, but I truly think that if you feel something, it’s real, and those two things don’t have anything to do with each other. It’s saying, Yeah, I don’t have everything together, but my feelings are still here, and they are still valid.

I read that you can play a total of eight instruments. Is there any instrument that you’re dying to learn – like, are you secretly practicing the bassoon?

[laughs] Not the bassoon. Lately, I’ve been becoming more and more fascinated by the harp, though. It’s not a very practical instrument, but I can picture myself playing the harp in front of a big crowd if the moment is right.

The “too young to drive” line brings to mind Olivia Rodrigo’s “drivers license.”

I love “Drivers License!” It is SUCH a well-written song. Olivia is super talented and a fantastic singer. I hope to get to meet her one day. I feel like she has done a great job speaking for people my age, and writing about real emotions that we feel and go through.

Do you remember your first “favorite song?” And what’s your current “favorite?”

When I was growing up, I remember really loving “Billie Jean” by Michael Jackson and “Chain of Fools” by Aretha Franklin. Those are still some of my favorites. I think the newest songs I’ve been loving lately are “Leave the Door Open” by Bruno Mars and Anderson .Paak (aka Silk Sonic) and “Looking For a Lighter” by Caylee Hammack.

What’s one thing about you that your fans would be surprised to learn? That you a secret punk fan? That you can make a killer lasagna?

Well, I can’t cook very well, but I do love a good iced coffee, shopping, and thrifting. That’s been my newest hobby and obsession lately. But, I think my fans would be surprised to learn that I love spending my free time outdoors. Fishing, 4-Wheeling, just taking in nature! I also really love going on rollercoasters!

Concerts are finally coming back. After a year without live music, if you could see any artist like, right now – who would you want to go see play?

I’ve really been missing live music. I would LOVE to see a Bruno Mars or John Mayer concert. They are two of my favorite artists, and I still have never gotten to see them live.

Your cover of “Have You Ever Seen The Rain” is credited as your “blow up.” What drew you to cover that song?

When I was growing up, I sang at small venues with my siblings. I’m from a very small town, so there aren’t many options to play, especially if you are 6, 9, and 10 years old like we were at the time. We would play at smaller venues that tended to have an older crowd, so we sang what they knew and what they wanted to hear. So we learned so many classics! We played The Judds, Tanya Tucker, The Eagles, Hall & Oates, Aretha Franklin, and Creedence Clearwater Revival. That’s the kind of music I was raised on anyway. My grandad suggested that I cover a CCR song on my Facebook and YouTube channels, and it all went from there.

And finally, what would you like to accomplish by the end of 2021?

I would love to have a #1 song on the radio! It would be the most insane thing ever. I would also love to have my own music videos and to put out some new music. But I really don’t know what is next for me, but I can’t wait to see.

Real To Me is out now.

Tags: Callista, Clark, how, It, reveals
You may also like
Celebrities News