Britain’s oldest SALT production site is discovered in Yorkshire dating back 5,800 years – indicating the mineral has been produced in the UK since before Stonehenge

The oldest salt production site in Britain has been discovered by archaeologists.

Located near Loftus, a small village north of the Yorkshire Moors, the saltern was in use around 5,800 years ago during the early Neolithic Age.

This predates Stonehenge, which was erected 300 miles away in Wiltshire around 3,000BC, by roughly 800 years.

Excavations reveal it was a successful facility which produced blocks of salt distilled from the waters of nearby North Sea.

It is thought to be thousands of years older than any other salt production site previously discovered in the British Isles and was likely set up by migrants from Europe who learnt the skill on the mainland before settling in England.

Salt was vital to human life as hunter-gatherer societies depended on it to preserve their meats and hides. 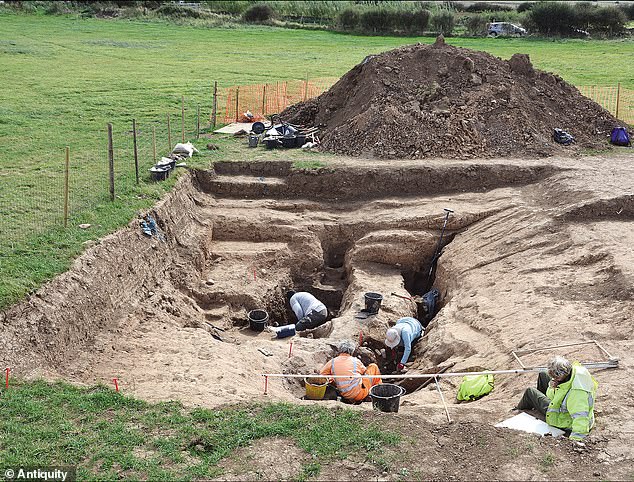 The oldest salt production site in Britain has been discovered by archaeologists in North Yorkshire. Pictured, archaeologists at work at the site in 2019 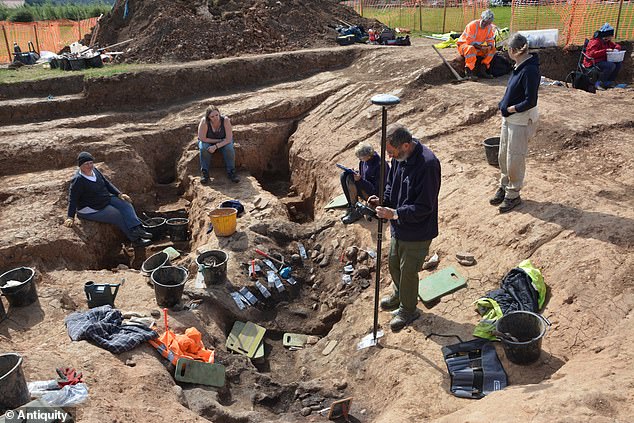 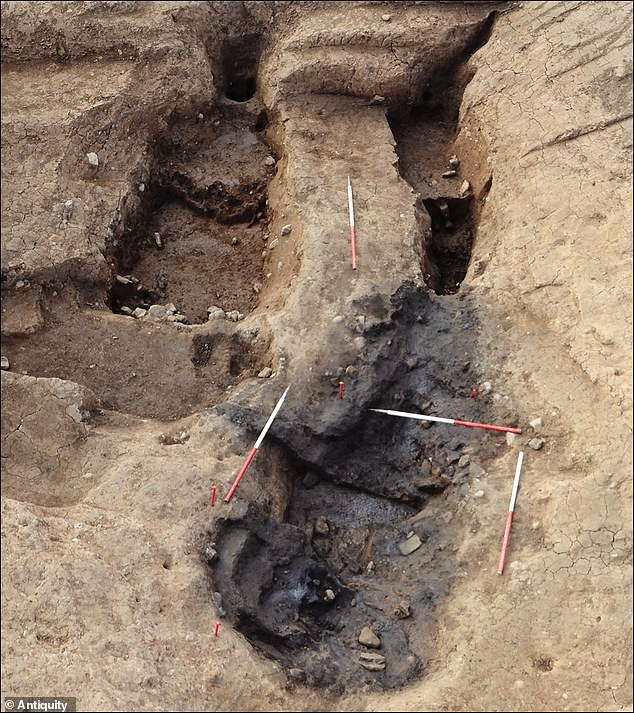 Pictured, a large blackened patch of earth at the saltern, seen here from the north

How salt was made in yorkshire 5,800 years ago

1. Seawater from the nearby shore was evaporated into a brine solution.

2. This was brought to Street House and stored in the pit.

3. The brine would be heated in pots placed over a hearth.

4. The pots were then broken to retrieve the resulting salt cake.

It is believed the entire process would have taken more than seven hours.

Dr Stephen Sherlock, a renowned independent archaeologist, reconstructed the salt production method based on what was uncovered at the site.

He found the workers in 3,800BC likely captured seawater in a pot from a site 2.5miles away in Skinningrove which was on the shore.

Here, the water was evaporated into a brine and then brought to the facility at Street House Farm, near Loftus, where it was stored in a pit.

The next stage of the extraction process involved pre-boiling the brine over a hearth for four hours.

This produced a paste and then a salt cake was created after another 2.5 hours of heating. The precious mineral was then extracted by smashing the pot.

Similar sites to the one found in Yorkshire have previously been discovered from the same time period in Romania, Poland and Southern France, but never Britain.

Writing in the journal Antiquity, Dr Sherlock found a trench containing three hearths at the salt site alongside hundreds of Neolithic pottery fragments.

Analysis of the shards revealed it was a rare type of carinated bowl which was brought over by French migrants around 4,000 BC.

The dating of the site was also backed up with carbon dating techniques.

Dr Sherlock believes the Loftus site would not have been the only one in the UK 6,000 years ago, but others have either been lost to rising sea levels or have yet to be discovered.

Other finds include stone tools and a storage pit as well as a nearby house, mortuary and cairn indicating it was a thriving business.

Salt was crucial to prehistoric societies as a way of preparing and preserving food and skins, but the difficulty in obtaining it mean it was a valuable commodity.

It could be mined in some places or extracted from seawater. Both methods required expertise which made it hard to come by but offered great wealth to those who mastered it.

‘At other Neolithic salt-working centres in Europe, the communities regulating the production and distribution of salt benefited from great wealth,’ said Dr Sherlock.

Britain began the move from ‘hunter-gatherer’ to farming and settlements about 7,000 years ago as part of the ‘Neolithic Revolution’

The Neolithic Revolution was the world’s first verifiable revolution in agriculture.

The period saw the widespread transition of many disparate human cultures from nomadic hunting and gathering practices to ones of farming and building small settlements.

Stonehenge, the most famous prehistoric structure in Europe, possibly the world, was built by Neolithic people, and later added to during the early Bronze Age

The revolution was responsible for turning small groups of travellers into settled communities who built villages and towns.

Some cultures used irrigation and made forest clearings to better their farming techniques.

Others stored food for times of hunger, and farming eventually created different roles and divisions of labour in societies as well as trading economies.

In the UK, the period was triggered by a huge migration or folk-movement from across the Channel.

The Neolithic Revolution saw humans in Britain move from groups of nomadic hunter-gatherers to settled communities. Some of the earliest monuments in Britain are Neolithic structures, including Silbury Hill in Wiltshire (pictured)

Today, prehistoric monuments in the UK span from the time of the Neolithic farmers to the invasion of the Romans in AD 43.

Many of them are looked after by English Heritage and range from standing stones to massive stone circles, and from burial mounds to hillforts.

Stonehenge, the most famous prehistoric structure in Europe, possibly the world, was built by Neolithic people, and later finished during the Bronze Age.

Neolithic structures were typically used for ceremonies, religious feasts and as centres for trade and social gatherings.