Virgin Galactic-founder Richard Branson and five company crewmates have made final preparations for a barnstorming ride to space Sunday, a bold show of confidence in his company’s readiness to start carrying adventurous passengers on brief trips out of the atmosphere.

Beating rival Jeff Bezos to space by nine days, Branson and company expect to zoom higher than 50 miles in Virgin’s sleek spaceplane, experiencing a few minutes of weightlessness and out-of-this-world views before gliding back to landing at Spaceport America near Truth or Consequences, New Mexico.

It will be the fourth piloted spaceflight for Virgin’s VSS Unity spaceplane and its 22nd overall. But it will be the first with a crew of six on board and the first with Branson, a high-stakes demonstration of his long-standing commitment to launching wealthy space tourists, researchers and even astronauts into space on a for-profit basis. 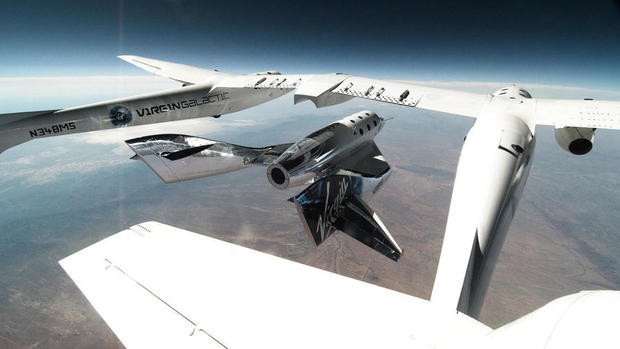 It also demonstrates the high-stakes nature of the competition to be first in the emerging space tourism marketplace with Virgin Galactic competing head to head with Blue Origin, owned by Amazon founder Jeff Bezos, for space tourism dollars.

After 15 unpiloted test flights, Bezos announced last month that he planned to fly aboard his company’s New Shepard spacecraft July 20 when it takes off on its first piloted flight to sub-orbital space. A few days later, Branson upstaged the Amazon founder, announcing he planned to take off nine days earlier.

“Yeah, there’s a little bit of competition in the who’s going first or when things are happening,” Virgin President Mike Moses, a former space shuttle manager at NASA, told CBS News. “But it’s really not a race. It’s not a competition. I know that sounds maybe a little shallow or disingenuous, but it’s not.

“It’s a small community. I know dozens of people who work at Blue Origin, I know dozens and dozens of people at SpaceX, and we all used to work together at NASA. And I wish every single one of them the best. … Because all of us together is what’s going to get humans into space and our culture to recognize that space travel is the foundation for the future for everyone.” 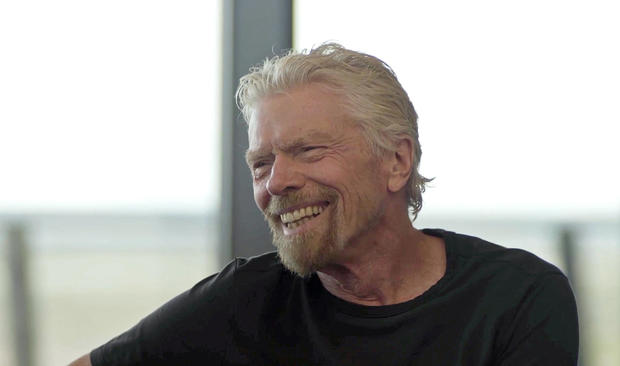 With typical Branson fanfare, Sunday’s flight will be broadcast live across Virgin Galactic’s social media platforms, featuring appearances by Stephen Colbert and retired Canadian space station astronaut Chris Hadfield, along with the performance of a new song by singer-songwriter Khalid.

Even SpaceX founder Elon Musk plans to be watching.

“Will see you there to wish you the best,” he tweeted Saturday.

Will see you there to wish you the best

“This has been a long journey for him,” Mike Moses said of Branson. “He’s like a kid in a candy store here in training this week. He’s bouncing around, he’s happy, excited. … But that excitement is really infectious. And so the whole crew is feeling it.” 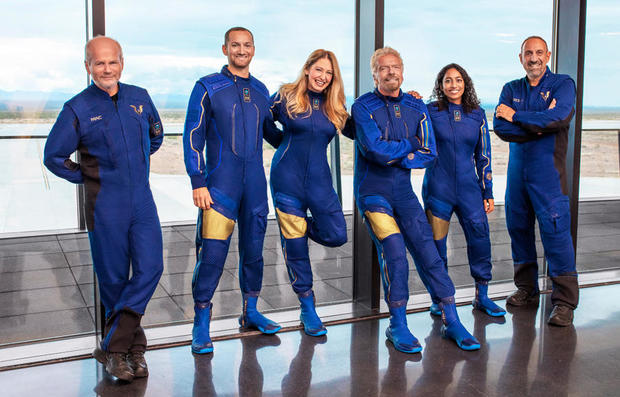 Asked if the team felt any pressure because of Branson’s presence on board, not to mention his wife’s, Moses said he would not hesitate to call off the flight if the weather or a technical issue raises a safety concern.

“I’ve scrubbed while Richard was watching before, and if I have to scrub while he’s on board, we will,” Moses said. “It’s a human flown, piloted aircraft. And so we take that safety very, very seriously. And we don’t treat any one crew member as any more or less important than any other.”

Assuming all goes well, VMS Eve will climb to an altitude of about 45,000 feet. At that point, after a final round of safety checks, carrier pilots Rick Sturckow and Kelly Latimer will release Unity to fly on its own.

Seconds after dropping away, Mackay and Masucci will ignite Unity’s hybrid rocket motor, kicking off a high-speed near-vertical climb out of the lower atmosphere, pushing the crew back in their seats with up to three times the normal force of gravity.

During crew training, Mackay told Branson and his crewmates the spaceplane will propel them “nice and smoothly to zero G.”

“It feels wonderful, and you will want to get out of your seat automatically, I think, to unstrap yourself and experience this thing,” he said in a company video shot during training. “To me, it’s all about the view, and it’s absolutely amazing. It’s spectacular.”

After the rocket motor shuts down, the spaceplane will continue climbing on a ballistic trajectory, reaching a high point of more than 50 miles, the “boundary” of space recognized by NASA and the FAA, before arcing over and beginning the plunge back to Earth. 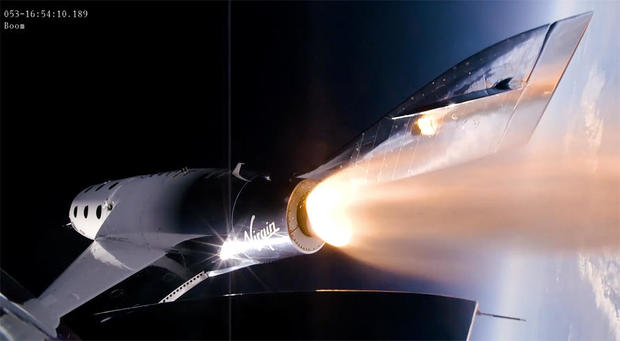 Along the way, the four passengers will experience about three minutes of weightlessness, allowing them to briefly unstrap and float about the cabin behind the two pilots, taking in spectacular views of Earth and space through 12 windows.

For re-entry, the spaceplane utilizes an innovation pioneered by legendary aircraft designer Burt Rutan — wing-like tailbooms that rotate upward with respect to the fuselage after the vehicle leaves the lower atmosphere.

In the so-called “feathered” orientation, aerodynamic drag is sharply increased, causing the spacecraft to naturally orient itself like a badminton shuttlecock for a relatively low-speed, low-temperature re-entry with minimal piloting.

Once back in the lower atmosphere, the tailbooms will rotate back parallel with the fuselage and the pilots will guide Unity to a landing on Spaceport America’s 12,000-foot-long runway.

If all goes well, Virgin is expected to carry out two more test flights before beginning commercial operations with paying customers on board. Ticket prices have not been announced, but a seat is expected to cost in the neighborhood of $250,000. More than 600 enthusiasts have reserved seats.

“I think we’re seeing the tip of the iceberg with the folks that have stepped forward already,” Moses said. “There’s going to be a huge interest.”