Brad Pitt and Nicole Poturalski were spotted boarding a plane together in France. Scroll on to learn more about her. 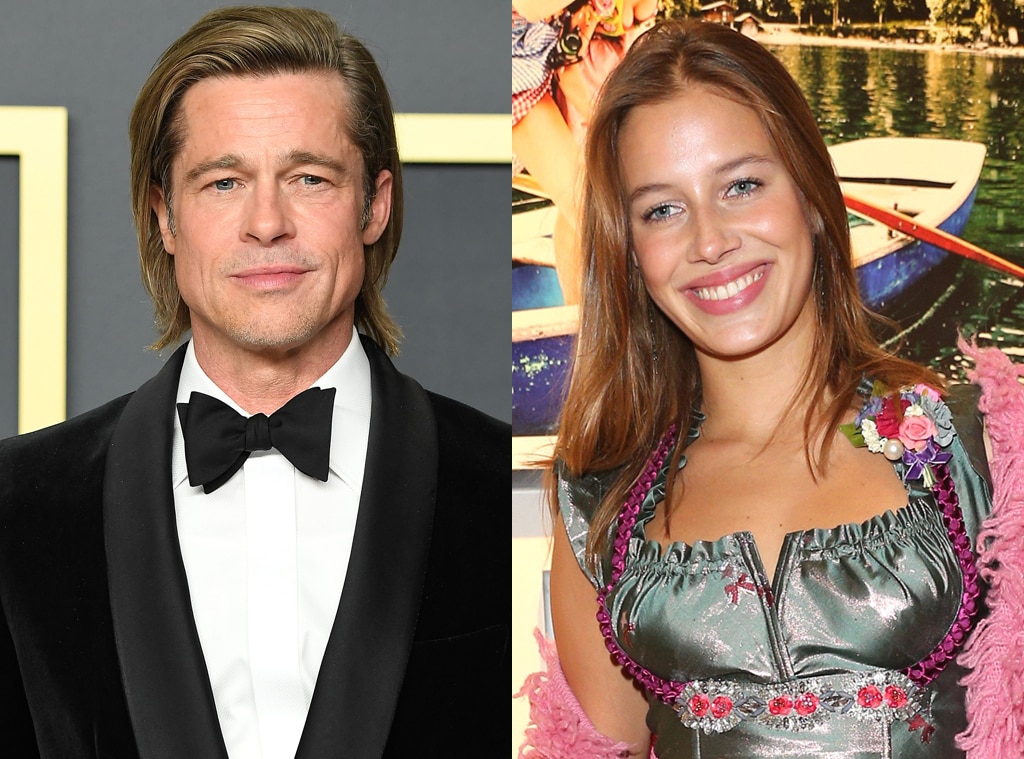 What's going on with Brad Pitt and Nicole Poturalski? That's the question on many fans' minds.

According to Entertainment Tonight, the two were spotted at the airport earlier this week. An eyewitness told the outlet Pitt and Poturalski traveled separately to Paris, France on Wednesday—with Poturalski reportedly touching down at the Paris-Charles de Gaulle airport first and then waiting for Pitt's plane to arrive. The eyewitness told ET the duo was then seen boarding a private plane headed for the South of France.

E! News has reached out to Pitt's rep for comment on a relationship status.

This wasn't the first time the two had been spotted together. Pitt and Poturalski were also photographed attending a Kanye West concert together in Los Angeles back in November 2019.

Pitt has often found himself at the center of romance rumors. If fact, Pitt has suggested he's read a few of these relationship reports over the years.

"People always say they don't read about themselves. I never believe it," the actor told The New York Times in 2019. "I don't go out of my way to avoid it; I just don't seek it out. I don't know how many women they've said I've been dating the last two or three years, and none of it's true."

So, what do fans need to know about Poturalski? While she lives a pretty private life, there are a few fun facts to learn from her social media accounts. For a breakdown, check out the list below.

1. She lives in Germany.

Based on her Instagram posts, she appears to live in Berlin. The Daily Mail also reports she's originally from Bergkamen.

2. She has modeled for numerous publications and brands.

According to her Instagram, Poturalski is represented by A Management. She's posed for a number of campaigns and has appeared in several magazines, including Marie Claire UK and Elle Germany just to name a few.

Just like Pitt, Poturalski is a proud parent. While she tends to shield her little one from the limelight, she has posted a few photos of her son on Instagram. She also shared an inspiring note to other moms in May.

"Little love letter to all moms, that try so hard, give so much love, time and heart. Don't sleep, worry too much and love even more," she wrote on Instagram. "You are great."

4. Her hobbies include reading, traveling and spending time with friends.

Poturalski has traveled to several destinations this year alone, including France, the United States and Ibiza. In fact, The Daily Mail reports she speaks five languages. Still, she loves being home with a good book.

"Sunny but chill mornings," she wrote on Instagram in April. "My goal while home is to read at least 10 books."

5. She may have hinted at a romance before.

In February, Poturalski shared a picture of herself walking down the streets of Los Angeles and captioned the Instagram post, "Missing my strolls with my Love." Then, in March, she wrote, "Saturdays these days for me is self-reflection, reading books spending time with my better half." Of course, Poturalski didn't name any names. But could she have been referring to Pitt?

Tags: brad_pitt, celebrities
You may also like
Celebrities News