Restaurant employee who called out of work after learning her sister was in a coma and DYING slams boss who criticized her for only giving two hours’ notice: ‘Jesus Christ, read the room’

A New Mexico woman has shared the horrifying texts messages she received from her supervisor after she called out of work because her sister was lying comatose in the hospital.

Hillary Zinks received a nightmare phone call last month that her sister had been hospitalized and was declared brain, so she immediately drove to Las Vegas to be by her bedside.

But when she notified her supervisor at the restaurant where she works that she would not be at her next shift — and explained the tragic nature of her situation — the supervisor chastised her for giving such little notice, telling her that her fellow employees would have a particularly hard shift because she was missing.

Furious, Hillary told the woman off, quit, and even sent her a photo of her comatose sister’s middle finger propped up — before learning from the senior manager days later that the supervisor was no longer employed there. 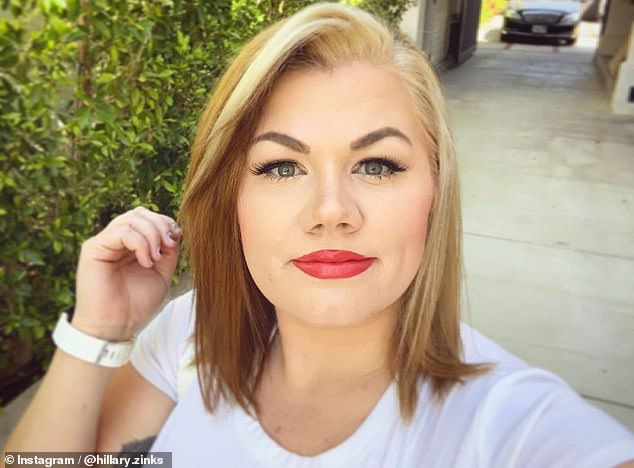 Hillary Zinks, a makeup artist from New Mexico, was working on a TV set when she learned that her sister was comatose and brain dead 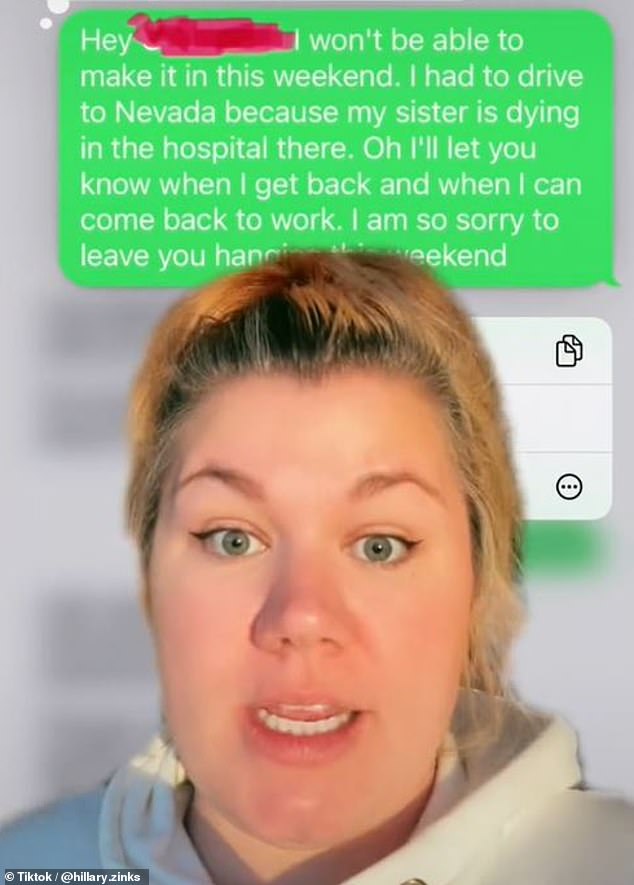 She immediately drove to be by her side, and texted her supervisor at her second job, at a restaurant, that she would miss her next shift 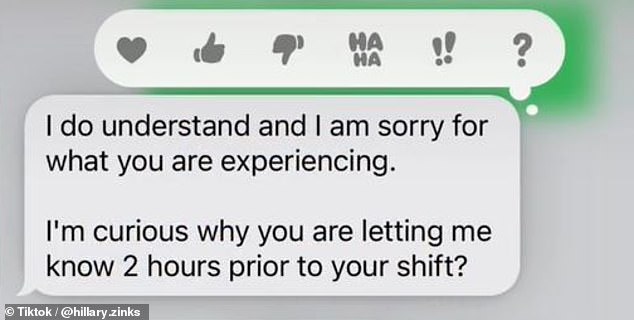 Though the supervisor said she was ‘sorry’ for what Hillary was experiencing, she also asked why she was calling out with such short notice

Hillary is a makeup and effects artist in the film industry, but also works as a waitress for extra cash.

In November, she got a call while she was working on the set of a TV series, and learned that her 40-year-old sister Amber ‘was in a coma, brain dead, could die at any moment, in the hospital.’

The response from her boss at the TV show was exactly what she would have hoped for.

Speaking to BuzzFeed, Hillary explained that her sister was ‘completely unresponsive and the nurses were looking for next of kin to make decisions on her behalf if need be.’

‘I was broken-hearted, frozen. I didn’t even have time to register all of this before deciding to leave to be with her,’ she said.

On her way to Las Vegas to be with her sister, Hillary sent a text to her supervisor at her restaurant job to notify them that she would be absent from her next shift.

‘Their response was very inhumane,’ she said on TikTok, before sharing screenshots of the text message conversation she had.

First, Hillary texted to say she wouldn’t be able to make it to her next shift because she ‘had to drive to Nevada because my sister is dying in the hospital there.’

She promised to let the supervisor know when she’d be back, and even apologized for the inconvenience.

Her supervisor’s reply started off kindly enough: ‘I do understand and I am sorry for what you’re experiencing.’

But then the supervisor’s words turned sour: ‘I’m curious why you are letting me know 2 hours prior to your shift?’

Hillary replied her that she left at one in the morning, to which her supervisor first repeated that she had compassion for her situation but was still not happy about it. 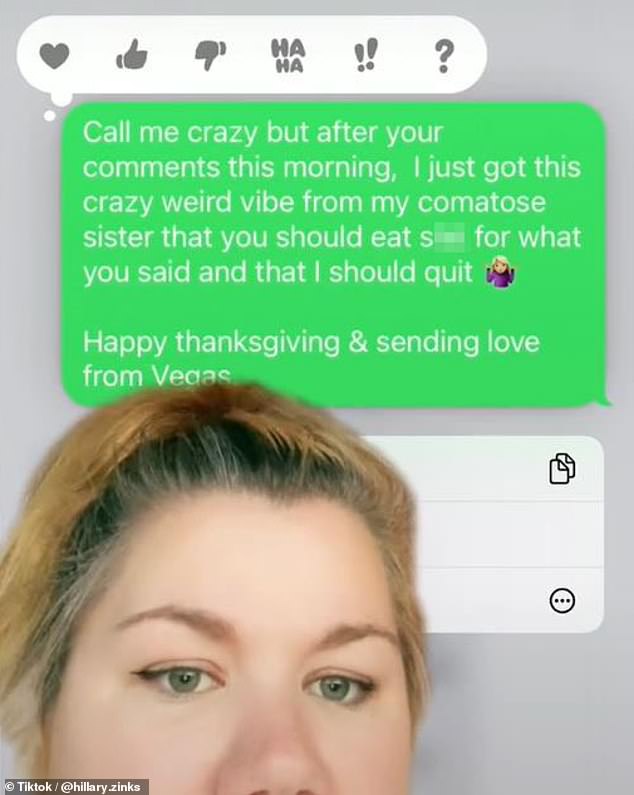 Furious, Hillary quit once she got to the hospital, and also sent a text message to the supervisor’s boss to let him know that she quit 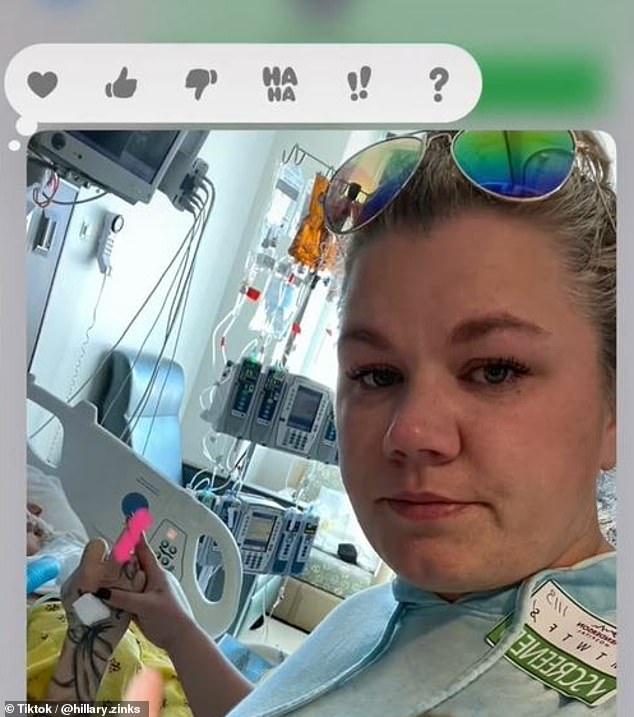 The supervisor wrote: ‘Though, it is my job to create a positive work environment for all staff. We have a 50 top today and only 2 scheduled staff members are expected for the shift… we will make it work, we always do, it just makes it hard on the crew that do show up.’

Hillary said that she was driving while she received these texts, and they were all she could think about.

She fired off another reply to the supervisor: ‘My sister’s dying and on life support. She may pass any minute. I just drove 8 hours to get to Vegas in hopes she doesn’t die all alone.

‘I don’t give a damn about the 50 top or how hard other people will have to work today, and if you’re so concerned, then put on a server’s outfit instead of telling ME that OTHER people will have it hard today. Jesus Christ, read the room,’ she wrote.

To that, her supervisor replied: ‘Thanks Hillary, take care.’

But Hillary was upset, determining that her boss was either accusing her of lying, or deciding that other people having a hard day at work is more important than her sister dying. 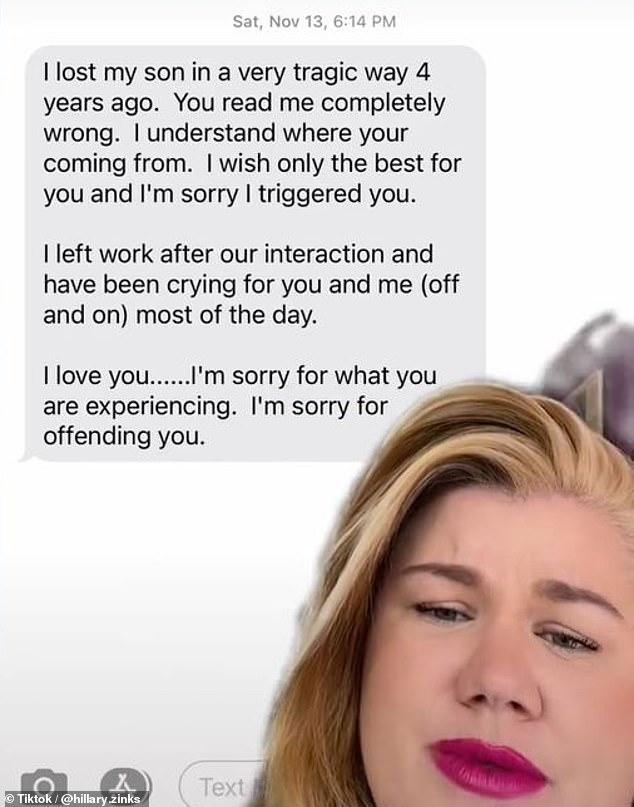 She later received an apology from the supervisor, who insisted that Hillary misread her 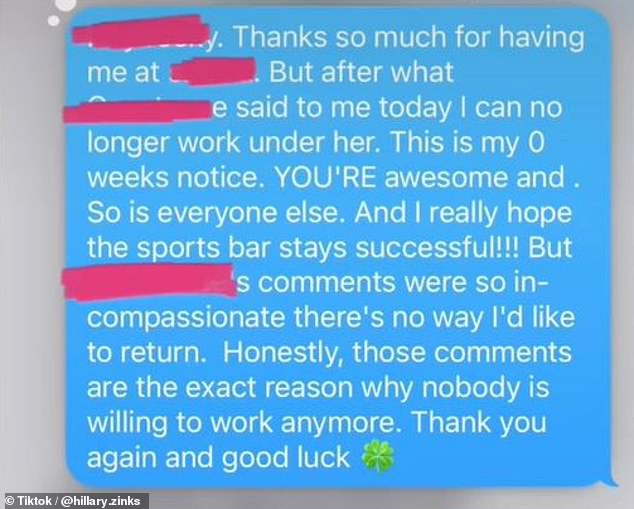 ‘The closer I got to the hospital, the more I realized how her behavior was absolutely unacceptable and I couldn’t work under her any longer,’ she told BuzzFeed.

So once she got there, she quit.

‘Call me crazy,’ she began her next text message, ‘but after your comments this morning, I just got this crazy weird vibe from my comatose sister that you should eat s*** for what you said and that I should quit.

She included a photo of herself in the hospital, standing beside her sister’s hospital bed. holding up her sister’s hand with the middle finger extended.

‘I know my sister would be laughing her a** off and she would be proud as f***,’ Hillary said on TikTok.

She also sent a message to the higher manager to quit, explaining what happened, blasting the supervisor for not being compassionate. The manager asked to see the conversation.

The manager later told her that the supervisor was no longer employed there, and invited Hillary to come back to work 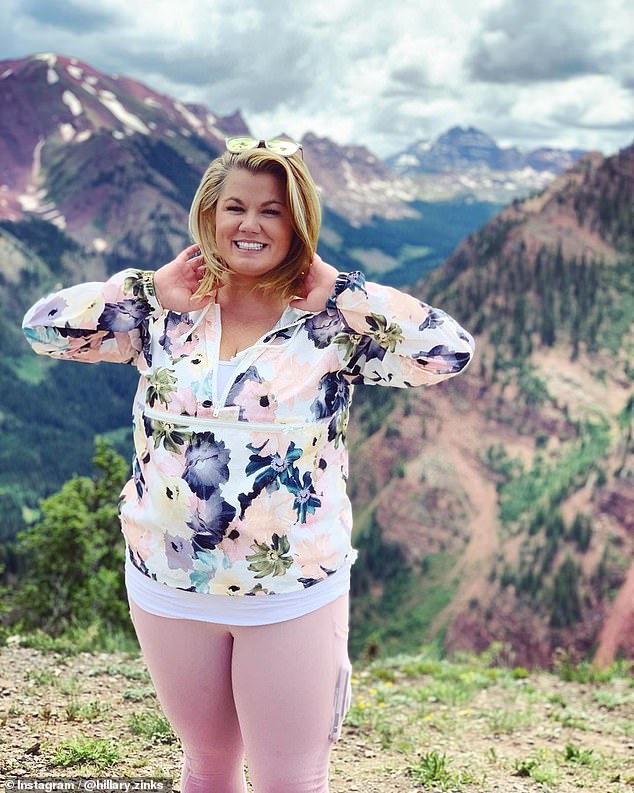 Hillary said that having the supervisor lose her job was not her intention, but she wanted the woman to look inward and learn not to make similar comments again

Hillary’s supervisor seemed to have realized she messed up, and replied later to say that Hillary had read her ‘completely wrong,’ and that she herself had lost her son in a ‘tragic’ way four years earlier.

‘I wish only the best for you and I’m sorry I triggered you,’ the supervisor wrote. ‘I left work after our interaction and have been crying for you and me (off and on) most of the day. I love you… I’m sorry for what you are experiencing. I’m sorry for offending you.’

Two days later, Hillary got an update from the senior manager, telling her that the supervisor was no longer employed there and inviting Hillary to return.

Hillary said that having the supervisor lose her job was not her intention, but she wanted the woman to look inward and learn not to make similar comments again.

‘We don’t need to work for people who barely see us as humans with emotions and families,’ she told BuzzFeed.

She also implored employers to treat employees with kindness and compassion.

Her sister Amber ultimately died, leaving behind five children. She was an organ donor, and Hillary said she died a hero.