State and territory premiers are under pressure to follow the NSW government's plan to give home buyers a choice between paying a one-off stamp duty or an annual fee, risking a hit to the budget bottom line while interest rates are low to scrap the widely disliked tax.

NSW Treasurer Dominic Perrottet on Tuesday called for states to work together to phase out stamp duty on residential properties following the release of the state budget. "There are a number of other state jurisdictions that are working on similar reforms," he said, indicating he was open to collaborating with his interstate counterparts "to refine the policy". 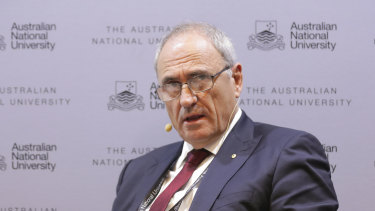 Stamp duty is considered an inefficient tax because the large upfront cost discourages existing homeowners from moving to more appropriate housing for their circumstances and hinders first-home buyers' efforts to enter the property market. It is also an unstable source of tax revenue for governments because of property market fluctuations.

Former Treasury secretary Ken Henry told this masthead it would be "much better if all jurisdictions" across the nation moved away from stamp duty. Dr Henry chaired Australia's Future Tax System Review, known as the Henry Review, which was released in 2010 and recommended replacing stamp duty with land tax.

"I think the NSW Treasurer is showing leadership here really," Dr Henry said. "The model as I understand it makes good sense and provides a good model for other states to follow.

"There would be an upfront budgetary cost with this sort of switch from stamp duty to an annual property tax or land tax, but that's an investment in a better tax system. With low interest rates, there's no better time for governments [to consider it]."

Stamp duty is one of the biggest contributors to state government budgets. NSW transfer duty collections fell from $7.4 billion in 2018-19 to $7 billion in 2019-20, with property sales plummeting during the coronavirus pandemic. Collections are forecast to rise to $7.9 billion in 2020-21.

The Andrews government is expected to hand down the 2020-21 Victorian budget on November 24. Last year's budget tipped stamp duty collections to fall 1.6 per cent to $5.9 billion due to falling property prices and fewer sales. At the time, 2020-21 was expected to see a recovery in the property market that would lead to an increase in stamp duty collections. But the coronavirus pandemic shuttered the property market through much of 2020, with sales volumes recording double-digit falls.

The changes to stamp duty in NSW could be "set in motion in the second half of 2021" after seeking community feedback in coming months, a statement released by Mr Perrottet said.

Former Reserve Bank governor Bernie Fraser said there was pretty broad consensus about the need to replace stamp duty with another form of tax, and referred to the Henry Review. "The Henry report was quite forceful in its argument of doing away with it," Mr Fraser said. "I thought they made a pretty persuasive case at the time."

'The model as I understand it makes good sense and provides a good model for other states to follow.'

Business Council of Australia chief executive Jennifer Westacott said the NSW budget was a model for other states and territories to follow. "While some jurisdictions are talking about reform, NSW is acting," Ms Westacott said in a statement.

"NSW has taken the bold step of putting major tax reform on the agenda through a consultation process on reform of stamp duty and property tax. Stamp duty is one of the more inefficient taxes that penalises economic adjustment," she said. The Grattan Institute, Deloitte and the Productivity Commission have all recommended replacing stamp duty with a more efficient tax, such as a broad-based land tax.

PwC chief economist Jeremy Thorpe praised the state government for the policy, saying it was a brave move to introduce such a reform, which would deliver benefits to future administrations.

He said stamp duty encouraged people to overcapitalise their existing home through renovations rather than moving.

"We've probably overcapitalised houses in Sydney with people renovating their bathrooms to the nth degree," he said. "I think this will encourage people to buy a new house rather than renovate."

Federal Labor spokesman for housing Jason Clare acknowledged stamp duty made it "harder for people to buy a home" and to move home. "We await the outcome of the consultation period to see exactly how this will work," Mr Clare said.

Tags: Bold, other, states, Step, urge
You may also like
Celebrities News