Zoe Daniel can pinpoint the moment that climate change’s existential threat to humanity crystalised in her mind.

For the former foreign correspondent turned climate-campaigning politician, landing in a military cargo plane in the obliterated Filipino city of Tacloban in 2013 was a life-altering moment. 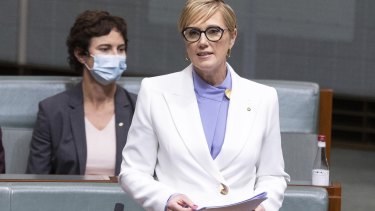 In her first speech to the federal parliament as the new member for Goldstein, Daniel recalled the horror of witnessing the aftermath of Typhoon Haiyan, which left thousands dead across the Philippines – an experience that would play into her decision to run for politics a decade later.

“As a journalist and foreign correspondent, I have seen all manner of climate-related disasters. Nothing before or since compares to the scenes in Tacloban, flattened by a storm surge that destroyed 90 per cent of the city,” Daniel said as she addressed the House of Representatives on Tuesday night.

“Bodies in the streets, cars in trees, giant boats atop buildings and, amid the rubble, the shattered lives of residents.

“This event was a turning point for me, a realisation of the impact climate change and its increasingly unmanageable weather events would have on communities.” 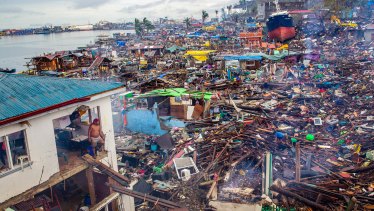 The destruction wrought by typhoon Haiyan in the Philippines in 2013.Credit:Brendan Esposito

Daniel enters the 47th parliament as one of six female “teal” independent MPs, backed by Simon Holmes a Court’s Climate 200 fundraising juggernaut, who ousted Liberal men in safe seats on a platform demanding urgent and ambitious action on climate change. Daniel defeated assistant minister Tim Wilson to become the first independent to hold the Melbourne seat and the first woman to represent the electorate dating back to 1901 when it was known as Balaclava.

She resigned from the ABC in 2020, ending a three-decade reporting career that repeatedly took her to the frontlines of climate-related natural disasters.

“I have waded through floods in northern NSW, Thailand and elsewhere in Southeast Asia; seen the melting permafrost in the Arctic and the animals and people scrabbling for survival as the environment morphs under their feet; reported on the aftermath of cyclones in the Pacific, hurricanes in the US, bushfires in Australia and California,” she told the parliament.

Her new job, she said, would be to hold the government to account for “dramatically improved climate policy and targets”, saying the proposed 43 per cent emissions reduction target by 2030 must be enshrined in law as a “floor, not a ceiling”.

Wearing suffragette colours of purple and white, Daniel drew on the example set by Vida Goldstein – one of the first women in the western world to stand for parliament when she contested the 1903 federal election – and after whom the electorate is named.

“Vida was a peace advocate, activist, politician and, as owner and editor of Women’s Sphere, a journalist, like myself,” she said.

Like her, Daniel said, Goldstein had also rejected party politics, telling voters last century “I ask you to vote for me because I am not a member of a political party” and describing party government as “a system that is entirely out of date”.

Goldstein failed in her ambition to enter parliament, making five unsuccessful attempts, but more than a century later a record number of women will take their seats in the House of Representatives.

“In this, our 47th parliament, women make up about 40 per cent, the highest proportion on record. That includes 19 first-term MPs. I am one, as the new member for Goldstein, in Vida’s name,” Daniel said.