Big business is backing the Labor party’s climate policy to cut greenhouse emissions 43 per cent by 2030, setting the scene for a bitter election battle between the major parties over the economic costs and opportunities of climate change.

Labor’s more ambitious policy, which is 8 per cent higher than the federal government’s goal, is driven by higher uptake of renewable power in the electricity grid than the Coalition’s projections. It also plans to fire up a dormant regulation known as the safeguard mechanism to ratchet up limits on industrial emissions, which major business groups support. 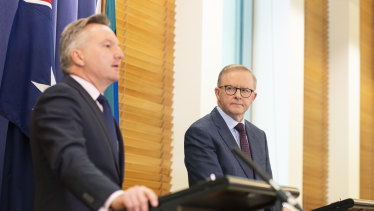 The Coalition established the Safeguard Mechanism in 2016 to set limits on the 215 biggest industrial polluters that cumulatively generate 28 per cent of national emissions, or 140 million tonnes of greenhouse gases in the past 12 months.

These polluters cumulatively generated 28 per cent of the 494 million tonnes of Australia’s emissions in the past financial year but to date the limits on polluters were so slight that industrial emissions have increased since the mechanism was established.

Ms Westacott said Labor’s plan was sensible and workable, highlighting the commitment to work with Commonwealth agencies and industry to map how the pollution caps would ramp up after they come into effect in 2023.

“We welcome the use of the existing Safeguard Mechanism and the Climate Change Authority to set emission budgets,” she said.

The BCA called in October for the government to set a target for 50 per cent carbon cuts by 2030 – more ambitious than Labor’s 2019 target of 45 per cent, which it branded “economy wrecking” three years ago.

“We should be neither fearful nor complacent about accelerating carbon cuts. The nature of carbon budgets means that if emissions merely glide down now they would need to power-dive later,” Mr Willox said. “By lifting our 2030 ambitions we reduce the burden of adjustment that we leave to post Baby Boomer generations.”

The Carbon Market Institute’s survey of 409 large carbon-emitting businesses and investors found 79 per cent backed tightening the caps under the Safeguard Mechanism, and 54 per cent are already factoring in a carbon price.

Peak fossil fuel groups issued muted reactions to Labor’s plan, with the Minerals Council and the Australian Petroleum Production and Exploration Association both pointing out their commitments to net zero to 2050 and welcoming the opportunity to consult over the design of new Safeguard rules.

Federal Energy and Emissions Reduction Minister Angus Taylor revved up an attack to be sustained until the election, due before June, claiming that Labor’s “sneaky carbon tax” would slug industry with a bill worth $1.66 billion by 2030. Polluters would need to buy 40 million tonnes of offset credits, which are currently selling for about $40 a tonne on the spot market, Mr Taylor said.

The government has committed to cut carbon at least 26 per cent by 2030 from 2005 levels of emissions. It expects to beat these cuts and says it is confident of a 35 per cent reduction, based on emissions projections by the Energy Department that forecast 69 per cent of electricity will be generated by renewables within a decade.

Modelling by energy analyst RepuTex said Labor’s changes to the Safeguard Mechanism would reduce annual emissions by 48 million tonnes in 2030, and its greater uptake of renewables would deliver a 37 million tonne reduction.

Labor has committed $20 billion to its Rewiring the Nation plan, which would mandate use of Australian steel and follows the Australian Energy Market Operator 2019 Integrated System Plan to fund upgrades across the electricity network to link the growing number of solar and wind farms being built across the country.

International Monetary Fund Australia mission chief Harald Finger told this masthead in September that “companies are able to readjust the baselines if plans turn out different than was projected” and urged the federal government to tighten the Safeguard Mechanism to drive down greenhouse gas emissions.

“Many of our members would have liked a slightly higher target, but this is a properly modelled policy that delivers jobs, cheaper electricity and emissions dividends,” said LEAN co-convenor Felicity Wade. “It is a solid foundation on which Labor can deliver the economic reform climate change demands, without leaving people behind.”