In places including Florida and Tennessee, school authorities are busy banning books – particularly anything involving “adult themes”, which, in their definition, includes sex, race or the existence of science.

What a contrast to the Australian education system in which I grew up. The English syllabus in senior school was a bloodbath of sex and death in which students were slowly marinated for six long years. I believe it’s much the same today.

I suppose Australian teachers decided that, as adolescents, we needed to face the full horror of the adult world that we were about to enter. Good on them, I say. 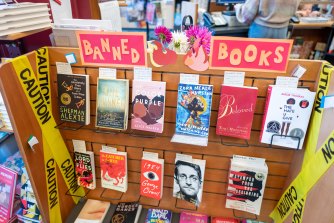 A display of banned or censored books at Books Inc independent bookstore in Alameda, California in October.Credit:Getty

We kicked off, in year 7, with a John Donne poem in which the poet used some lazy casuistry about a flea to tempt one of his gal pals into bed. I don’t recall the teachers saying “don’t try this at home”, which may explain the high levels of teenage pregnancies in the ’70s.

Next up was William Golding’s Lord of the Flies, which offered a rather dire assessment of human nature. His argument: strip away the thinnest veneer of civilisation and we’d all turn, almost instantly, into the most murderous of thugs.

After a morning spent studying the book, we’d retire to the playground for a lunchtime bout of British Bulldog, the bloodthirsty violence of which provided considerable support for Golding’s theory.

With shirt buttons torn off, and the occasional bleeding forehead and broken leg, we’d return to the classroom for another insight into the human condition.

This might involve reading Orwell’s 1984 – in which a man is tortured with a cage full of large, ravenous rats – or the light comedy of Equus, a psycho-sexual horror show involving six horses being blinded by a boy wielding a steel spike.

At this point, we moved into year 8. By then, we were judged old enough to tackle theatre, which comprised Shakespeare and various Greek tragedies.

These made Lord of the Flies look like a rosy rom-com. People were killing their fathers, sleeping with their mothers and committing suicide at 14 years old because their love life was a bit hit-and-miss.

If only we’d had the internet, we could have spent an hour or two on the dark web, just to have a break from the constant horror.

Year 9 was spent on John Wyndham’s various dystopias, in each of which humanity was consumed by a new threat – triffids, cuckoos, aliens – and then by an excursion into the trenches of World War One, courtesy of the world’s most brutal war book, All Quiet on the Western Front, plus the poetry of Wilfred Owen.

By year 10, our teachers had decided we were sophisticated thinkers who could now cope with the emptiness at the heart of human existence. A course of reading in French nihilism was ordered, focusing on the work of Albert Camus – a bloke who hadn’t cheered up since he’d been left out the Algerian soccer squad at age 16.

His books all had light-hearted titles such as The Plague, The Fall and The Outsider and posited that life was pointless and crushingly dull. For anyone growing up in the Australian suburbs, this appeared a statement bordering on the obvious.

Occasionally, though, a student would survive Camus with their optimism intact, at which point they’d be prescribed a course of Sartre, which usually sorted things out.

Students who read Sartre would inevitably begin writing adolescent poetry, in which they’d avoid rhymes while imagining the sweet release of death, at which point the English teachers knew their work was done.

The final years of schooling were, by contrast, a canter.

We read Thomas Hardy’s Tess of the d’Urbervilles and made notes about how the author’s imagery of blood and the colour red foreshadowed the tragic outcome of the book.

And we read DH Lawrence’s Sons and Lovers and made notes about how the author’s phallic imagery and curious psycho-sexual urges foreshadowed the tragic outcome of the book.

And we read Aldous Huxley’s Brave New World and made notes about how the government should drug the lower classes to make them more pliable – a policy not on offer by any of the political parties of the time.

Now, years on, I find myself choosing rather sedate novels involving giddy love affairs and the odd social faux pas. I have an aversion to crime and dislike anything involving the blinding of horses. My basic policy: There are enough bad things in the world, without writing novels about them.

It’s got to be better than what’s available in the book-banning states of America.

Once they are my age, those American kids will realise they know nothing about life. They may even be forced into undertaking a crash course of Sartre and Camus.

At that age, it could prove an existential crisis.

To read more from Spectrum, visit our page here.