Aussie surfer Owen Wright is facing a major battle to reach the podium at the Tokyo 2021 Olympics and that's why he sought a UFC fighter as a mentor for the Games.

While his opponents have spent the past two months in the water preparing for the sport’s first ever appearance at an Olympic Games, Wright has been living with former UFC middleweight champion, Luke Rockhold in Los Angeles. 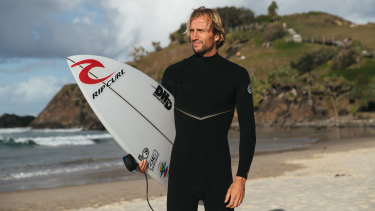 “Aussies are particularly known for their fighting spirit so I’m just trying to understand the fighting spirt he has to put himself through in the ring,” Wright said. “I think the Aussies have a battle in front of them and the four of us are up for the battle. I have been trying to mentally prepare myself to get up to that standard and give myself a go.”

For Wright, training for the Olympics has been as much about the mental preparation as physical conditioning. To ensure his mind is sharp, aggressive and resilient in Japan, he reached out to his friend, Rockhold, in hope of gaining an insight into his mentality inside the UFC cage and applying that to the waves.

“Mate it is is incredible to see, the way they mentally prepare themselves to jump into that ring is something I am trying to feed off,” he said. “They step into the boxing ring everyday and throw kicks and punches and it is just full on.”

Wright and Rockhold have been friends for the past six years and when the Australian surfer was going back to Los Angeles recently, he reached out to Rockhold and the fighter has been training him daily in the lead-up to the Tokyo games.

“I have just been getting along with him. He’s an excellent trainer, he’s at the top of his game and hoping for another fight so it’s just been really good to pair up with him and train with him,” Wright said. “I am getting ready for a fight myself which is the Olympics so we have just been feeding off that, feeding off each other which is awesome.”

The Australian surfing team, named The Irukandji, is comprised of four surfers; Sally Fitzgibbon and Stephanie Gilmore in the women’s competition and Julian Wilson and Wright in the men’s. The Tokyo Games will be the first time surfing is included in the Olympics but the sport’s debut looks to pose a few challenges.

First are the small-wave conditions, but more problematic is the COVID-19 pandemic sweeping through Japan. Tokyo has gone into a state of emergency with crowds set to be banned from attending events. The surfers have experience of competing through the pandemic, most recently in El Salvador in a world surfing tournament. Despite all the protocols in place, competing as the virus rampages will cause significant stress and anxiety for the athletes at the Games.

“I feel like travelling in a pandemic, there definitely is this layer of anxiety you are dealing with and it is constant and it is an underestimated energy drainer,” Fitzgibbon said. “Coupled with the pressure, it’s going to be about managing those energies.”

Tags: A, Aussie, fig, for, ready, surfer
You may also like
Celebrities News